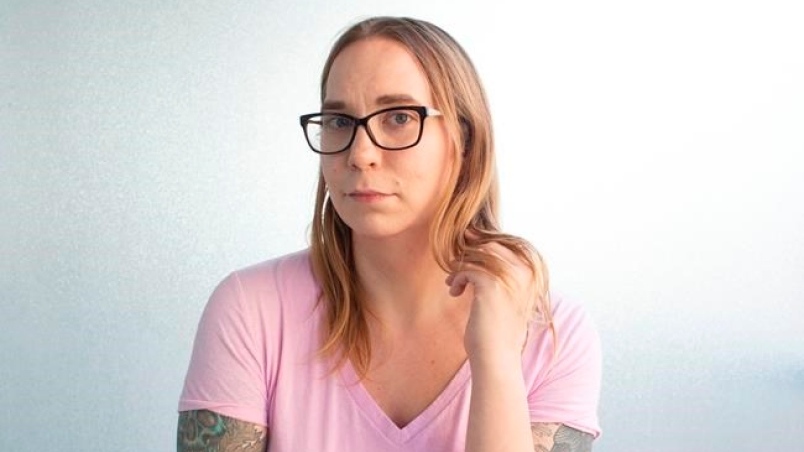 Writer and scholar Gwen Benaway is photographed in her in Toronto apartment on Monday, October 28, 2019. THE CANADIAN PRESS/Chris Young

When Gwen Benaway found out she had won the Governor General's Literary Award for poetry, she said her immediate reaction was not joy, but "intense fear and panic."

The Toronto writer and scholar says she's shocked to be among the few transgender women to be recognized by a Canadian literary institution, even as she protests another.

News of the honour came as Benaway and others denounce Toronto Public Library for refusing to cancel an event featuring a speaker who has been critical of transgender rights. She's since been fielding a barrage of online attacks for her role in the outcry.

Benaway, who is of Anishinaabe and Metis descent, hopes the awards spotlight on her third poetry collection, "Holy Wild," will amplify her voice to reach other trans women, but fears the attention will also draw out a familiar chorus of people eager to silence her.

"It's a double-edged sword," Benaway, 32, said by phone ahead of Tuesday's announcement of the literary prize winners.

"You have these moments where representation happens, and it means a lot to people like you, but at the same time, you're almost more vulnerable."

Benaway is among the critics who urged the library's board to cancel the planned talk, saying the institution is providing a platform for Meghan Murphy to spread hate speech.

Murphy, a freelance writer who runs the website "Feminist Current," has written that "allowing men to identify as women" poses a threat to women and their rights.

The library, meanwhile, says it is aware that the event has caused "anger and concern" but maintains it has an obligation to protect free speech.

Benaway said she would protest the talk set for Tuesday, titled "Gender Identity: What Does It Mean For Society, The Law and Women?" and hosted by a group called "Radical Feminists Unite."

"It's kind of funny to have literary recognition happen ... during that time period, because it reminds me of how much work we have to do as trans people and trans women just to have our voices be heard, just for us to be taken seriously as artists and thinkers."

Benaway said "Holy Wild," published by Book..hug, tracks how institutional discrimination is entwined with more intimate forms of transphobia, drawing from her own experiences with romance and dating.

"I've heard from a lot of other trans women that the book was important to them, that it was one of the first times that they saw themselves," said Benaway.

"I think it is important in that way to create these works of literature that show the possibilities, but I don't want to sugarcoat the reality of what life is like for trans women in Canada. It's still very difficult."

The Governor General's Literary Awards, which are administered by the Canada Council for the Arts, named six other English-language winners Tuesday.

Winnipeg's Joan Thomas scored the fiction prize for "Five Wives," published by Harper Avenue, a historical novel based on the real-life stories of women who must fend for themselves in the Ecuadorian rainforest after their missionary husbands are killed.

Thomas, whose previous accolades include the Amazon.ca First Novel Award, said she's honoured to join the ranks of Manitoba-bred writers such as Miriam Toews, Sandra Birdsell and Carol Shields who have been recognized by the Governor General's Literary Awards, which were founded in 1936.

"This is a prize that's had so much historical significance," said Thomas. "It's always felt very prestigious to me."

Don Gillmor of Toronto received the non-fiction prize for "To the River: Losing My Brother," published by Random House Canada.

The drama honour was awarded to Toronto's Amanda Parris for "Other Side of the Game" from Playwrights Canada Press.

Erin Bow of Kitchener, Ont., won the young people's literature prize for text with "Stand on the Sky," published by Scholastic Canada, while the illustrated books award went to Halifax's Sydney Smith for "Small in the City" from Groundwood Books.

In the French-to-English translation category, the winner is Linda Gaboriau of Montreal for "Birds of a Kind" from Playwrights Canada Press, a translation of "Tous des oiseaux" by Wajdi Mouawad.

Each winner receives $25,000, while the publisher of each winning book receives $3,000 to support promotional activities. Finalists each receive $1,000.

Gov. Gen. Julie Payette will host a ceremony honouring the winners at Rideau Hall in Ottawa on Dec. 12.

This report by The Canadian Press was originally published on Tuesday, Oct. 29, 2019.