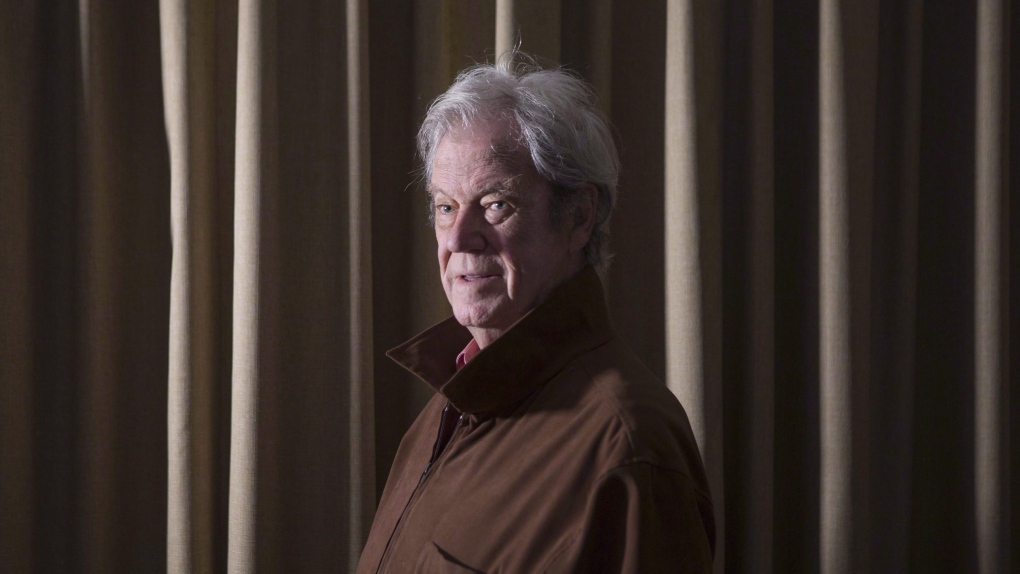 Actor Gordon Pinsent is pictured in a Toronto hotel room as he promotes his film "The River of My Dreams: A Portrait of Gordon Pinsent" during the 2016 Toronto International Film Festival on Sept. 13, 2016. (Chris Young / The Canadian Press)

While those around him talked about a dreamlike, folklore entity that "came into your being and stopped you from succeeding in life," they referred to it as "the Hagge," says the award-winning stage and screen star.

"In Newfoundland terms, she woke you up in the middle of the night and she sat on your stomach and arrived in that sleeve of time between sleeping and waking -- and wouldn't let you move, wouldn't let you succeed in life, wouldn't let you have the happiness you were probably aching for and striving for," Pinsent, 87, recalled in a recent interview at his Toronto home.

"My Hagge-like stuff came later when I began to ... know exactly what depression was, what anxiety was -- anxiety being of the future and depression being of the past, and getting all of that straight.

"But this is only after I had survived, graduated from an earlier free-for-all life that I've known for so long."

Pinsent has documented such experiences in the self-funded short film "Martin's Hagge," which screens Wednesday at the Canadian Film Fest in Toronto (9:30 p.m. ET at Scotiabank Theatre).

Pinsent wrote and Penny Eizenga directed the film, which stars Sheila McCarthy as the personification of the Hagge.

With wry mannerisms, a wild mane of hair and an outfit made of grey rags, she is a constant, negative presence in the life of a despondent writer, played by Paul Braunstein.

As he starts to form a relationship with a colleague, played by Martha MacIsaac, the Hagge is determined to bring him down in a story that is both tender and humorous.

"The voice that speaks to us sometimes, if we really sat back and listened to it, we would realize how absurd some of our thoughts can be," said Eizenga, who is also an actor and previously worked as a nurse and in the pharmaceutical industry.

"You have to be able to laugh at yourself sometimes and say, 'I can't believe that I took it to this place, this is absurd.' That's what I loved about it, was taking the teeth out of it."

An avid writer who likes to jot his thoughts down first thing in the morning, Pinsent first explored his experiences with the Hagge about two decades ago in the play "Corner Green."

In the past few years he's come to further understand his anxiety and depression through a psychotherapist who's helped him through delirium resulting from surgeries for the chronic pain condition trigeminal neuralgia.

"During one of our discussions about varying things, we came upon the phrase of 'the path' -- the next path, the new path," said Pinsent, whose films include the Oscar-nominated "Away from Her" as well as "Two Lovers and a Bear" and "The Grand Seduction."

"As opposed to old-hat path that I've been living on for so long now. It stopped me from doing an awful lot, even in the last 10 years. Certainly since I came out of that operation I thought, 'No, it'll never be the same again,' and I saw that as a negative thing. Everything had changed."

Pinsent and Eizenga are now considering turning "Martin's Hagge" into a TV series.

He said he's also written a TV a series about "an aging detective with bizarre methods of deduction."

Where Pinsent once figured the Hagge was something he couldn't do anything about, he now has a different perspective.

"There are a number of things that are helping me get beyond and say, 'Wait a minute, real is real. It's not there until that reality, until that comes about,"' he said in his living room, which is filled with his own paintings.

"So tomorrow can be quite different from today. You don't have to give yourself over to old wives tales of Hagges and various things."