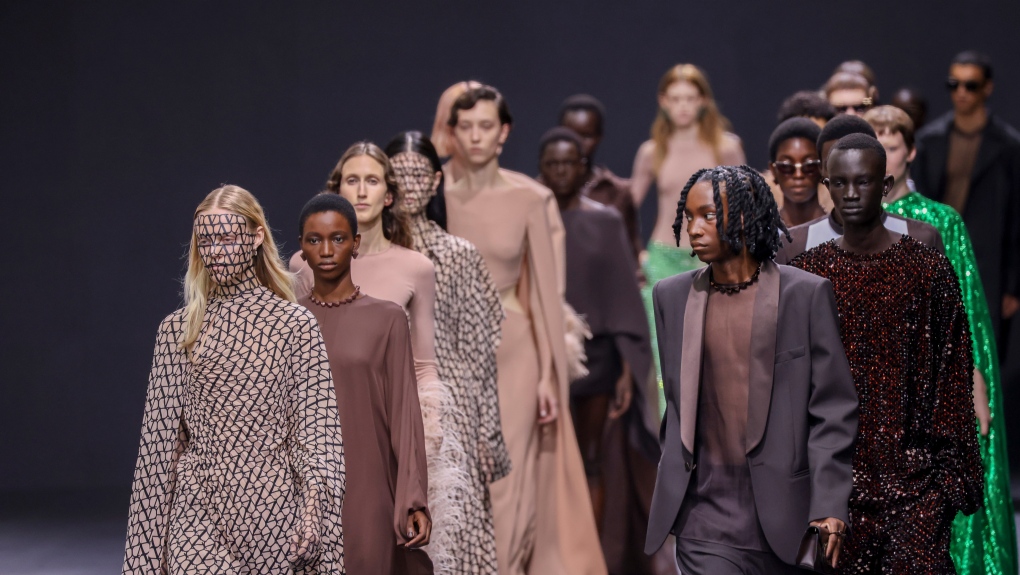 Valentino's Paris fashion show on Sunday saw snared lines of black cars dropping off battalions of celebrities who, amid the commotion, just couldn't find the entrance.

Seated VIP guests were sweatily crammed in together inside the Le Marais venue, waiting as the show started an hour late. While outside, screaming members of the public braved the rain for hours just for a glimpse of their favourite stars, who included Zendaya, Naomi Campbell, Florence Pugh, Erykah Badu and Ashley Park.

Fever pitch like this at Paris ready-to-wear is reminiscent of the French capital's pre-pandemic fashion scene – and one more visible sign the industry is buoyant again after the devastation caused by the coronavirus pandemic.

Here are some highlights of Sunday's spring-summer 2023 collections in Paris:

Models with faces and necks completely covered in disturbing interlocking "V" makeup began the show, introducing the theme of the reveal.

The exploration of inside-out or back-to-front continued in a beautiful nude skin-like top with matching nude pants speckled sparingly with diaphanous plumes on model Anna Cleveland.

A coat had ostrich feathers peaking out from inside through the hems. The sides of some dresses were scooped out, while a dazzling purple sequined floor-length gown revealed the model's flesh only at the back.

Yet at times it felt as if the lauded Italian designer may have tried to fit too much in. By outfit number 91, it also felt exhausting – with fashion insiders fidgeting for the show to wrap up.

The Valentino finale was the true reveal of the show, which was livestreamed: The models did not even walk past seated guests as usual, but straight outside to the cheering general public, making some inside feel superfluous.

Rain would normally be a good thing in the green thickets of the Jardin des Plantes, the gardens in central Paris.

For Givenchy's outside runway, it was another story.

VIP guests including Olivia Rodrigo survived torrential downpours only thanks to helpers clutching transparent umbrellas. But the show had to go on. For Matthew M. Williams, a designer who has garnered lukewarm reviews of late, this collection was a little like crunch time.

For spring, the U.S. designer moved his street aesthetic in a dressier direction – likely trying to bring himself to the safer ground of the age-old house's traditional esthetic. He had some success.

An oversized tweed black bolero cut a creatively surreal silhouette atop a pencil-thin mini dress, twinned with Matrix-style shades. Elsewhere, features such as ruching on a silken top, or draping on a fluid skirt, resembled thick organic sinews or human ribs.

This felt like a good, gently transgressive, direction for the house immortalized by Audrey Hepburn's LBD.

However, many of Williams' design elements still felt out of place on the haute Paris runway, such as '90s low-slung cargo shorts that seemed unflattering, clashing with the black silken ruffled cuffs that dangled down.

THE ART OF THE INVITATION

The art of the chic invite is still very much a staple of the Paris luxury industry.

The little works of art sometimes provide a hint as to what the collection has in store; other times, they are just plain wacky.

One fashion insider exclaimed: "But how do you know how to get to the show?"

Valentino's invitation was a smooth black cube that opened to have nothing inside but a QR code. While, Chanel's was a card of Kristen Stewart's face so big that it could not fit into letter boxes.

Low-key French designer Barbara Bui is a good example of how the pandemic affected the fashion industry – for better and for worse.

Many houses went digital during the lockdowns, opting to show a fashion film instead of staging a show, which was for many months prohibited. In this spring Paris season – like in Milan's – the industry seems to be very much back to pre-pandemic runways, yet Bui's was one of a spattering of collections that continued with the fashion film format.

It's a smart move: Smaller houses like Bui's have benefited from the new flexibility as runway collections are clearly much more expensive to produce.

The collection's spring video featured a couple of lovers in a French country house seeking each other out and seemingly wearing each other's clothes – a good theme for a coed fashion show.

The film's use of light sat well with the fluidity of a loose white tuxedo suit on a bare chest, or a giant multicolored foulard thrown nonchalantly over the male model's naked shoulder. A cobalt blue one-shoulder piece was set off by the male model's metallic, androgynous nail polish.

National Revenue Minister Diane Lebouthillier is facing calls from Conservatives to apologize for suggesting that Tuesday's auditor general report indicating that billions of dollars in COVID-19 benefits went to those who were ineligible was influenced by political pressure.

Polygamous leader had 20 wives, many of them minors: FBI

The leader of a small polygamous group near the Arizona-Utah border had taken at least 20 wives, most of them minors, and punished followers who did not treat him as a prophet, newly filed federal court documents allege.