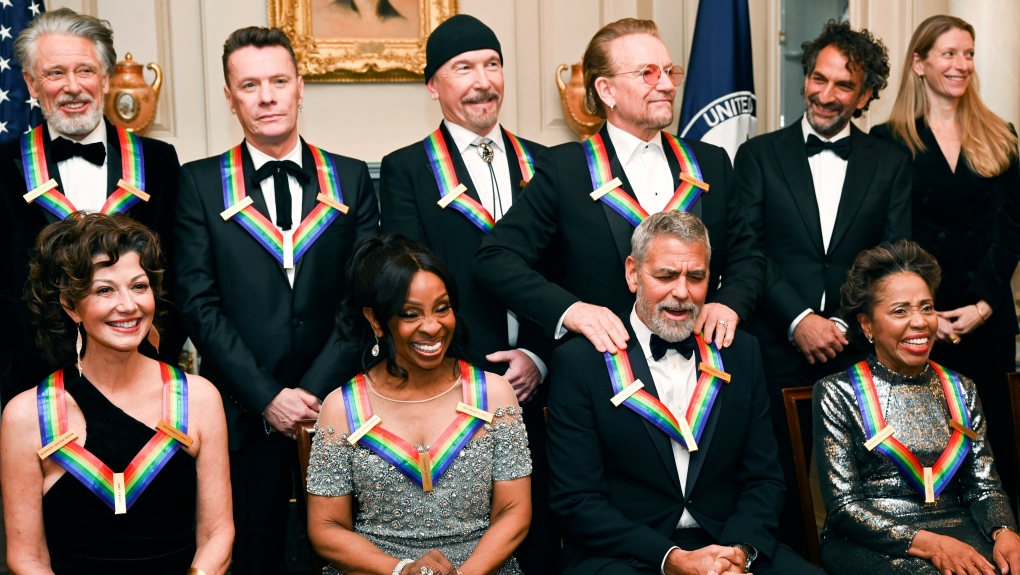 Actor George Clooney, singer-songwriter Amy Grant, singer Gladys Knight, composer Tania León and rock group U2 were celebrated on Sunday for their contributions to the arts at a White House reception and a music-filled Kennedy Center Honors show.

The Kennedy Center event, now in its 45th year, recognizes stars from music, stage and screen for their contributions to American culture.

At a reception for the five honorees at the White House, President Joe Biden addressed each artist personally, praising their individual talents and saying they embodied the spirit of the country.

"Tonight, we celebrate a truly exceptional … group of artists who embody the very spirit of 'We the People,'” Biden said.

The room was packed with celebrities, the White House's second star-studded event in recent days.

Actors Julia Roberts and Matt Damon were seated next to each other, in front of journalist Katie Couric. Former Washington, D.C. police officer Michael Fanone, who was beaten defending the U.S. Capitol on Jan. 6, 2021, was seated next to singer Eddie Vedder in the front row.

Inside the Kennedy Center opera house where the show was later held, House of Representatives Speaker Nancy Pelosi and her husband, Paul, who has been recovering after he was attacked in October in their San Francisco home, appeared in a balcony and got a standing ovation when they were recognized from the stage by David Rubenstein, the Kennedy Center's chairman.

The show highlighted the five artists' work, and represented a return to the times before the coronavirus pandemic began; on Sunday night, there was no requirement for testing or masking to attend, though many continue to die of the disease in the United States. Clooney, an actor and filmmaker who played a doctor on the popular NBC television show "ER" before launching a movie career that earned him two Academy Awards, said becoming a Kennedy Center honoree was a little daunting.

"I grew up in a little town in Kentucky and I watched it on TV," Clooney told reporters about the Kennedy Center Honors, referencing previous winners Jimmy Stewart and Robert Redford. "That's an exciting fraternity to be a part of."

Roberts and Clooney's father, Nick, along with actors Damon, Don Cheadle and Richard Kind appeared on the Kennedy Center stage to honour the filmmaker. "George's best and most important work is still ahead of him," his father said.

Roberts, who has co-starred in multiple films with Clooney, wore a floor-length gown with framed images of him on it.

"I feel giddy," she said on the red carpet at the Kennedy Center before the show. "Mostly I feel a debt of gratitude," for all the people who have worked with her for four decades, she said. "Everything takes a village."

Singers Sheryl Crow, Brandi Carlile, CeCe Winans and BeBe Winans were among the artists who celebrated Grant with a selection of her songs.

Knight, who has won seven Grammy Awards, is famous for hit songs including "I Heard It Through the Grapevine" and "Midnight Train to Georgia" as the lead singer of The Pips, which became Gladys Knight & The Pips in 1962.

"She connects with you on a deeper, spiritual level," said actor LL Cool J, speaking onstage about Knight. Singers including Garth Brooks and Patti LaBelle performed some of Knight's songs.

Cuban-born León is a conductor as well as a composer, whose orchestral piece "Stride" won the 2021 Pulitzer Prize in Music.

The final tribute of the evening went to Irish band U2 which, with members Bono, The Edge, Adam Clayton and Larry Mullen Jr., has won 22 Grammy Awards and was inducted into the Rock and Roll Hall of Fame in 2005.

Sacha Baron Cohen, playing his alter ego character Borat, quipped on stage that he was looking for former U.S. president Donald Trump and made reference to antisemitic behaviour by Ye, the artist formerly known as Kanye West.

Vedder performed "Elevation" and "One," while Ukrainian singer Jamala joined Carlile and others to perform "Walk On."

"At a moment when there’s too much hate, too much anger, too much division here in America and, quite frankly, around the world, we have to remember today, as their song goes, 'We’re one, but we’re not the same. We get to carry each other,'” Biden said at the White House, referencing a U2 lyric.

Carlile noted the U2 artists' and Grant's support for LGBTQ rights while representing their Christian faith to the world.

"When you have guys like Bono and The Edge and you got people like Amy Grant coming out in support of queer people in the way that they do, it's really brave," said Carlile, a gay woman. "It's done a lot for me spiritually."

The Kennedy Center Honors show will be broadcast on CBS on Dec. 28.