'Flashpoint' kicks off fifth and final season built around 'legacy' 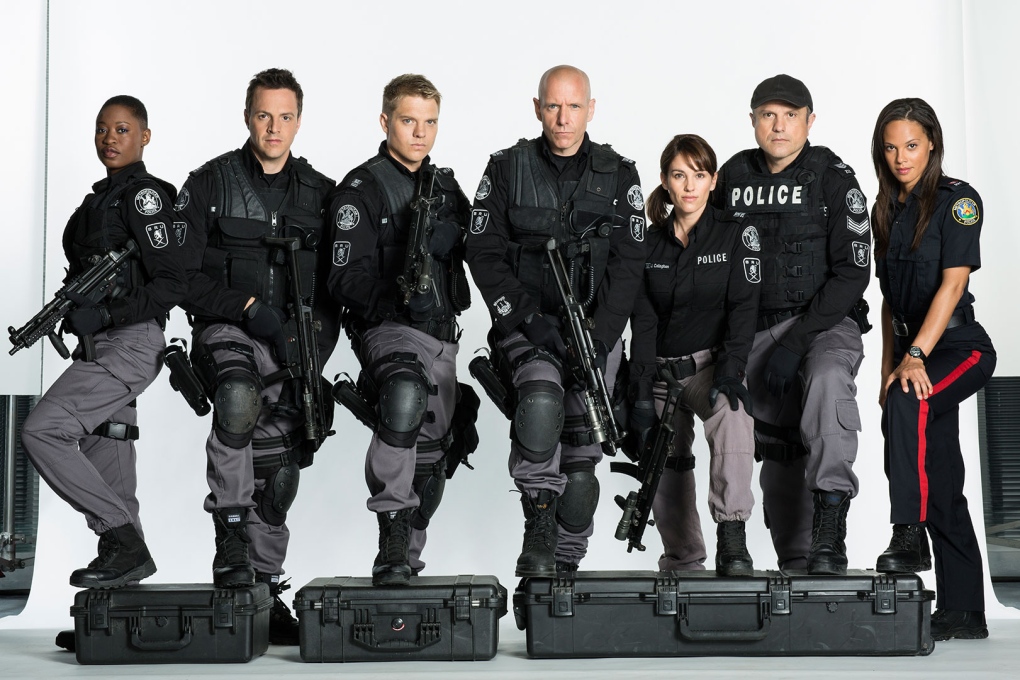 TORONTO -- It's the beginning of the end for CTV's cross-border hit "Flashpoint."

The celebrated cop show launches its fifth and final season Thursday with sharpshooter Ed Lane forced to take a heart-wrenching shot that reverberates through the team.

It's a fitting farewell that will bring the homegrown series full circle to its very first, similarly Ed-focused episode, promises writer and co-creator Stephanie Morgenstern.

"There are some things that we set up in the pilot episode that are paying off now, 75 stories later," says Morgenstern, who launched the series with co-creator Mark Ellis on July 11, 2008.

"That's a really satisfying thing. I think it's actually a great gift to be able to know when you're going to end the series -- to be able to think of the last season ... as a whole is extraordinary."

The pressure to get this right is big, she admits, if only because the cast and crew have bonded so tightly each feels an obligation to each other, as well as the fans, to salute the series they love.

Co-star Enrico Colantoni, who plays team Sgt. Gregory Parker, chokes back tears when he discusses his final days on set.

"There's a lot I love and am going to miss about this world -- as an actor, as a human being."

Few Canadian series have managed to deliver the impact of "Flashpoint" -- a bona fide hit that proved homegrown fare could be populist, acclaimed and internationally successful all at the same time.

It was the first Canadian series since "Due South" to air in network prime time on both sides of the border, paving the way for a wave of other Canadian series to also strike U.S. deals.

"We drew eyeballs to the very first episode and those eyeballs stayed," says Ellis, who hopes "Flashpoint"'s legacy will be more cross-border shows.

"I think the perception of the broadcasters may be changing and that's good news for everybody creative in the country."

Although CBS eventually dropped "Flashpoint" from its lineup (it was subsequently picked up by the U.S. specialty channel ION Television) the show found a home in more than 100 territories worldwide, including Germany, France and the Netherlands.

The show was still riding high in Canada when executive producers Anne Marie La Traverse and Bill Mustos announced earlier this year they were calling it quits. Mustos says the show had reached its "apex" last season and the question became: "Can we outdo Season 4?"

"I think we have surpassed Season 4 in Season 5 and as we were (preparing) Season 5 we were starting to have those glasses of wine ... and saying, 'Now can we do it again?' " he says.

"We thought that it was probably a very good chance that Season 6 was not going to be able to maintain the same level for a whole variety of reasons -- just the well of stories that you already used up and (the amount of) available money, all those things -- and so after a number of conversations and a number of glasses of wine we decided that we would rip the Band-Aid off and we would decide that this would be the end."

Making that decision allowed them to focus on plotting "a killer two-hour finale," he says.

"Basically, it was go big or go home," Morgenstern adds.

"And we also wanted to come full circle to a lot of the themes we had set up in the first season, which were what drew us to start thinking about the subject seven years ago in the first place. Which was the human cost of heroism, the complicated human situation that it is to be responsible for peace, for keeping the peace and for someone's life or death."

Dillon says he found the first script of the season especially challenging for his intense alter ego.

"I just thought it was an exceptional story and the arc of the Ed Lane character is phenomenal this season, as with all seasons, but this season in particular," says Dillon.

Mustos says fans can expect more ambitious storylines for the final run, noting the challenge this year was to squeeze their grand plans into a workable timeline and budget.

"It's a show that's really on its feet this year," he says.

"We have done bigger, bolder special effects this year. There's more action and explosions than we've ever attempted before. That's tough to do and that's expensive to do."

And while past seasons have each tackled a theme, such as sacrifice or family, this season's theme will be legacy, says Ellis.

Such heavy thoughts pull out the clown in an emotional Colantoni.

"I lobbied for the whole team to get killed," Colantoni smirks.

"That would be wonderful for me, you know what I mean? That we just all went out like Butch Cassidy and Sundance, just like: pow pow pow pow! And just get annihilated and then it's a definitive ending. Apparently, nobody really wants to end a show like that. Everybody we asked was sort of like, 'That would be like a big punch in the stomach."'

Although letting go will be hard, Colantoni admits that he agrees it was time.

"I was just glad that they had made that decision before it was too late," he says.

"We all unconsciously knew that (if we did) anything more, we're going to start diluting it. We already started making the jumping-the-shark jokes.... It's the same thing -- 'Oh, what's going to happen this week?' 'Oh, you know, somebody gets kidnapped and we have to negotiate them down.' "

As tight off-screen as their cop characters are on-screen, Colantoni and Dillon already have plans to work together again.

They've formed a production company called Latchkey Kids and say they are working on their first feature: a buddy comedy based on a short film called "Issues" that they brought to the Toronto International Film Festival last year.

Dillon says they hope to shoot the low-budget project in January.

Musing on the end of "Flashpoint" has him feeling wistful.

"Just to be this close to the finish line and having succeeded, it's the thrill of a lifetime, it's exceptional," says Dillon.

"Flashpoint" kicks off its fifth and final season Thursday on CTV.