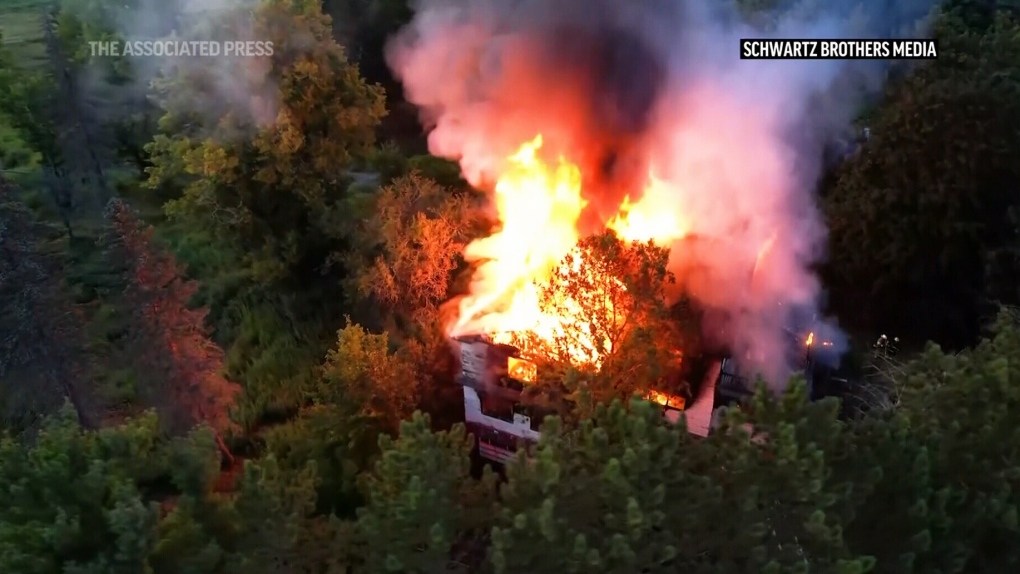 A fire consumed a building at the site of the long-closed Grossinger's resort in New York. (Photo: AP/Schwartz Brothers Media)
LIBERTY, N.Y. -

A fire consumed a building at the site of the long-closed Grossinger's resort, once among the most storied and glamorous hotels in New York's Catskills.

In its heyday after Second World War, Grossinger's drew hundreds of thousands of vacationers a year, many of them Jewish. The resort had a 27-hole golf course, indoor and outdoor pools, a nightclub, two kosher kitchens and a 1,500-seat dining room. It drew crooners like Eddie Fisher and has been cited as an inspiration for the 1987 movie "Dirty Dancing."

The fire broke out Tuesday evening in a three-and-half story building on the old hotel property. Firefighters who responded to the scene had to cut through a gate and were hampered by overgrowth and concrete barriers. An excavator knocked down the structure after the fire was out, according to a Facebook post by the Liberty Fire Department.

It was not immediately clear what the building had been used for, though Sullivan County Fire Coordinator John Hauschild said the main building was torn down about four years ago.

The cause of the fire was under investigation.

Fisher not only made his debut at Grossinger's, but married fellow entertainer Debbie Reynolds there in 1955. Other big names to appear at the resort were Joel Grey and Leslie Uggams, as well as boxers Rocky Marciano and Jack Dempsey.

Grossinger's operated for nearly 70 years before closing in 1986, suffering the fate of many local hotels after the region's appeal faded. The site fell into disrepair amid efforts to redevelop it.

Price at the pumps hold no surprise this morning, with national averaging slipping

Drivers across Canada were bracing for a big bump in the price at the pumps today, with whispers of a 10-cent hike. But according to the CAA's gas price tracker, as of 4 a.m., the national average price of gas slipped from $1.64 per litre to $1.61.

Businesses in Canada will soon be able to pass credit card fees on to their customers, thanks to a multimillion-dollar class-action settlement involving Visa and Mastercard.

This year's Nobel Prize in chemistry has been awarded in equal parts to Carolyn R. Bertozzi, Morten Meldal and K. Barry Sharpless for developing a way of 'snapping molecules together.'

A family in Ontario is pleading for help after their daughter goes missing in British Columbia, Canada's public safety minister says the proposed firearms bill is needed to curb gun violence, and the Toronto Blue Jays learn who their wild-card playoff opponents will be. Here's what you need to know to start your day.