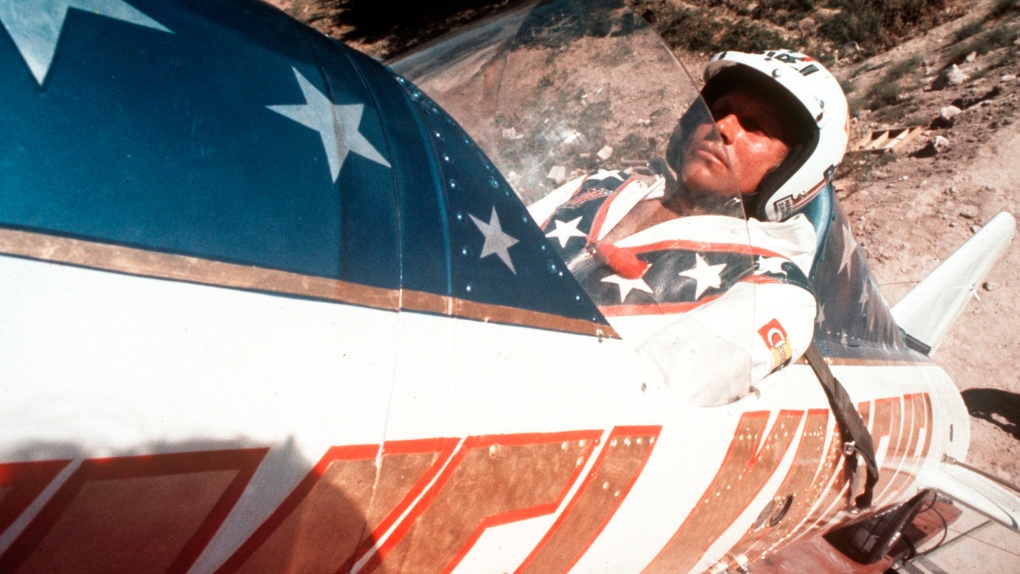 In this Sept. 8, 1974, file photo, Evel Knievel sits in the steam-powered rocket motorcycle that will hopefully take him across Snake River Canyon in Twin Falls, Idaho. (AP Photo, File)

LAS VEGAS -- Evel Knievel's son is on a collision course with the Walt Disney Co. and Pixar over a movie daredevil character named Duke Caboom.

A federal trademark infringement lawsuit filed in Las Vegas accuses the movie company of improperly basing the new character in last year's "Toy Story 4" on Knievel, whose famous stunts included motorcycle jumps over the Caesars Palace fountain in Las Vegas and a row of buses at Wembley Stadium in London, and a rocket shot into Snake River Canyon in Idaho.

Las Vegas-based K and K Promotions accuses Disney-owned Pixar of intentionally modeling the Caboom character, voiced by Keanau Reeves in the movie, after Knievel -- although Knievel's name is never mentioned.

Son Kelly Knievel, head of K and K, has had publicity rights to Evel Knievel's name since 1998, according to the Tuesday court filing in U.S. District Court. He said Thursday the moviemakers never sought permission to use his father's likeness.

The Walt Disney Co. , in a statement from corporate spokesman Jeffrey R. Epstein, said it will defend itself vigorously against what it called Knievel's meritless claims.

Knievel is seeking unspecified damages totalling more than US$300,000 on allegations that also include false endorsement and unjust enrichment.

The Caboom character is described by Disney Pixar as a 1970s motorcycle-riding toy based on "Canada's greatest stuntman," according to the lawsuit.

Photos in the court filing put Caboom side-by-side with Knievel, who became an American icon after his near-fatal 1967 Caesars Palace crash.

An Evel Knievel Stunt Cycle toy released in 1973 featured a Knievel action figure clad in a white helmet and jumpsuit with red, white and blue embellishments on a motorcycle that could be propelled with a wind-up device.

In vivid descriptions of the movie, the lawsuit notes the Caboom character is a 1970s-era daredevil clad in a white jumpsuit and helmet with Canadian insignia and a "Duke Caboom Stunt Cycle."

A propelled toy was marketed in conjunction with the movie, Knievel's attorneys note, and the Caboom character became part of a McDonald's fast-food "Happy Meal" promotion.

Consumers and film reviewers "universally caught on to the connection," the lawsuit observed, while the movie company and Reeves avoided making any public association, connection or comparison "even if directly asked."

"Evel Knievel did not thrill millions around the world, break his bones and spill his blood just so Disney could make a bunch of money," Kelly Knievel said in a statement announcing the lawsuit.

Knievel was seriously injured many times during more than 75 motorcycle jumps. He died in 2007 at 69 in Florida of lung disease, not in a crash.