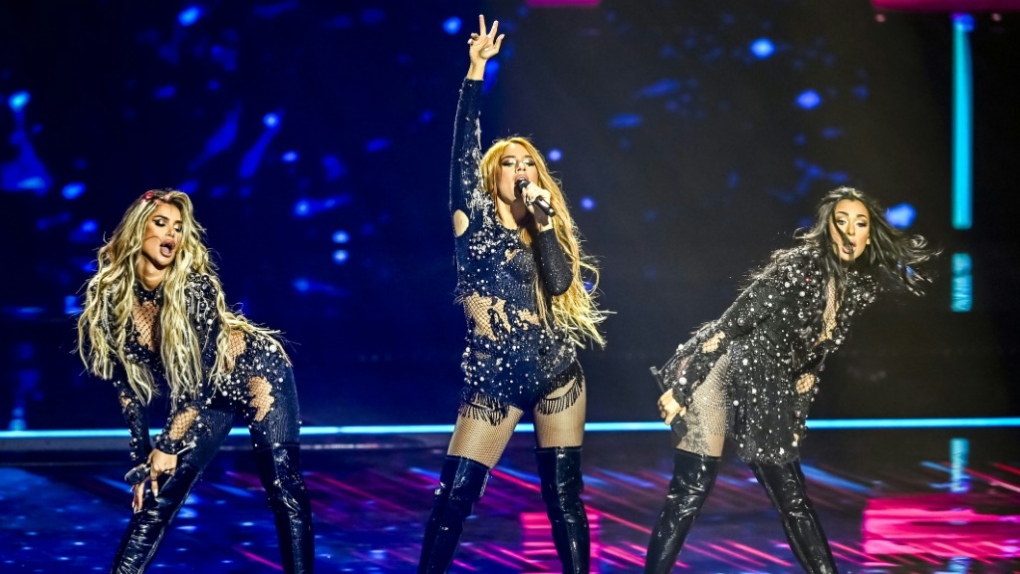 Hurricane from Serbia performs during a rehearsal of the second semifinal of the Eurovision Song Contest in Rotterdam. (AFP)

ROTTERDAM, NETHERLANDS -- The kitschy glamour of Eurovision is back, with the Dutch hosting a scaled-down, coronavirus-safe version this week after the song contest was cancelled last year.

Around 3,500 COVID-tested fans will be allowed to attend the May 22 final in Rotterdam as the return of the pageant injects some glitz into Europe's cautious reopening.

Performers will be in a special "bubble" under strict rules imposed by the Dutch government to allow the contest at the port city's Ahoy Arena to go ahead.

Known for its flamboyant costumes and cheesy songs, Eurovision is watched by more than 180 million people in over four dozen countries as far afield as Australia.

But the televisual pageant was scrapped for the first time in its six-decade history last year as the coronavirus pandemic began sweeping the globe.

On Saturday, organisers announced that one of the members of the Polish delegation had tested positive for COVID-19 and that the whole delegation -- including singer Rafal Brzozowski -- has gone into quarantine.

This means they will not be able to perform live at Thursday's second semifinal when a recording of their last rehearsal will be shown.

The cancellation was a bitter disappointment for the Netherlands, which won the right to host the contest after Dutch crooner Duncan Laurence won in Israel in 2019.

At the peak of the pandemic, the Rotterdam venue was even repurposed to host 88 beds for coronavirus patients.

But now it will host live audiences not only for the final but also for two semi-finals on Tuesday and Thursday.

Under the Dutch government's Fieldlab programme of trial events, each show will allow an audience of 3,500 people, around 20 percent of the Ahoy Arena's capacity.

For viewers used to a sea of flags and glammed-up artists hugging and celebrating, the 2021 Eurovision Song Contest will however be different.

Artists from most of the 39 countries involved are travelling to the Netherlands, but some -- such as Australia -- will take part via pre-recorded video.

National delegations have to follow strict protocol, remaining separated from the audience and testing every 48 hours.

"The numbers have been scaled down considerably. Delegations are much smaller," Executive Producer Sietse Bakker said.

They also said they expected "very few" fans would travel from abroad due to Dutch travel restrictions including a 10-day quarantine and PCR test requirement.

"We want to keep the coronavirus out as much as possible," Bakker said.

Despite recently easing some restrictions, the Dutch government is still struggling with a slow vaccine rollout, in a country of 17 million people where 17,000 people have died and 1.57 million been infected.

But Eurovision's unique mix of kitsch and simmering national tensions remains much the same despite the pandemic.

"It's not pressure I feel, it's impatience and joy," said Pravi.

France has been waiting for a Eurovision champion since 1977 when Marie Myriam won the competition.

"This is a dream come true and a testament that I am on the right track and that hard work pays off," said the singer, who won the second edition of X Factor Malta, when the deal was announced.

Weird and wonderful Eurovision stories have emerged as with any other year.

Russia's entry, "Russian Woman" performed by Manizha, has upset conservatives at home with its anti-sexism lyrics.

Cyprus meanwhile has stood by its controversial entry after the Orthodox Church accused it of advocating "devil worship".

And while the coronavirus pandemic has made for a very different Eurovision this year, it is not the first time the event has collided with reality.

The 2017 edition held in conflict-hit Ukraine was marked by tensions with Russia while the last show in Israel in 2019 sparked protests by pro-Palestinian activists and artists.