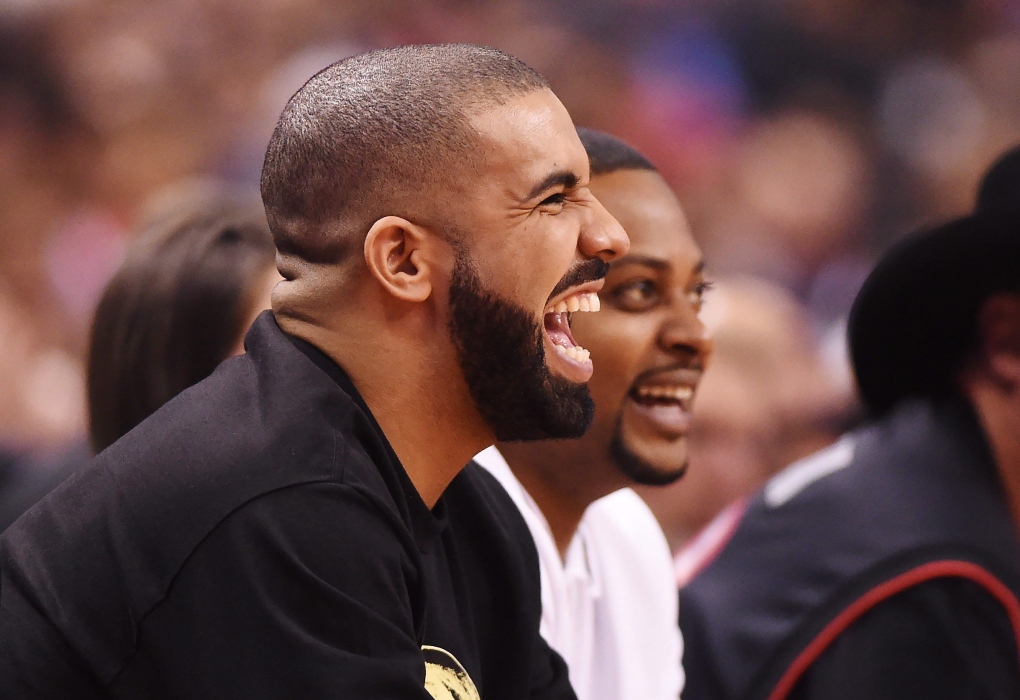 Rapper Drake has a laugh during first half NBA basketball action between the Golden State Warriors and Toronto Raptors in Toronto on Wednesday, November 16, 2016. (THE CANADIAN PRESS/Frank Gunn)

One night later, with the Warriors in town to play his hometown Raptors on the fourth-annual Drake night, Drake had to put his well-known friendship with Curry on hold.

Drake, still shaking his head in disbelief at the trick -- Blaine had conjured up tiny frogs, seemingly from nothing, and spit them out of his mouth into glasses of water -- said that he and the reigning NBA MVP had exchanged words leading up to Wednesday's tip-off.

"There was banter, I don't know how friendly it was," Drake joked. "Me and Steph are like family, me and KD (Kevin Durant) are like family, I'm great friends with Draymond (Green), same with Klay (Thompson), I've got a lot of friends on this team.

"These are the nights where we just agree to say whatever needs to be said and we put it all behind us afterwards. Friendly banter is a bit of a stretch but definitely a bit of banter has been going on."

Drake typically makes no attempt to hide his friendship with the Warriors stars.

Durant was even seen at Drake's annual OVO Fest in Toronto two summers ago, where the Canadian entertainer made a comment that led to a tampering fine on the Raptors by the NBA.

Drake maintained Wednesday that he never explicitly said that Durant, who was still under contract with Oklahoma City at the time, was coming to the Raptors.

"I just tried to show him how much the city would love if he came here," Drake said. "But I think that goes for anybody that comes and plays hard for this team. ... There's obviously a lot of options and a lot of teams in the NBA but there's really no place like Toronto that will give you that love where you have the opportunity to become a true beloved superstar -- an icon."

The Raptors were 3-0 in the past three Drake Nights, including a 103-99 win over the Cleveland Cavaliers last year, before falling 127-121 to Golden State on Wednesday.

Drake, the team's global ambassador since 2013, said he tries to choose the "most exciting" matchup on the schedule when picking his annual event. He then added that he picks games he thinks the Raptors can win.

"They're a great team but they're not invincible," Drake said of Golden State before the game. "I want the Drake Night record to not only be all wins, I want them to be all good wins."

Green, who scored 11 points and added seven rebounds and five assists in the Warriors' victory, was glad to see Toronto's perfect Drake Night record come to an end.

"(Drake)'s been talking junk for a couple weeks now, talking about how they were going to beat us and that it's Drake Night. He may be a little disappointed," Green said. "The shirt was nice, the shirt was really nice (Drake was wearing a sweater with ESPN reporter/analyst Doris Burke's face on it) but his boots were so bad and I was a little disappointed in his outfit overall.

"It's Drake Night, you've got to bring better boots than that."

The Raptors, coming off a loss in Cleveland on Tuesday night, were dressed in their alternate black-and-gold, Drake-themed jerseys for Wednesday's games.

Fans were given long-sleeve, black Raptors T-shirts featuring the "6 God" logo -- two hands drawn clasped together in prayer with the number 6 in the top left corner. The praying-hands emblem appeared on the cover of Drake's 2015 mixtape 'If You're Reading This It's Too Late.'

Drake himself posted a photo of the T-shirts on his Instagram account an hour and a half before tip-off.

"It does (bring a different energy)," Toronto coach Dwane Casey said of Drake Night before the game. "I think it's given our whole organization a new vibe, the city a vibe of a guy like Drake representing and being a part of the organization and having a night like that.