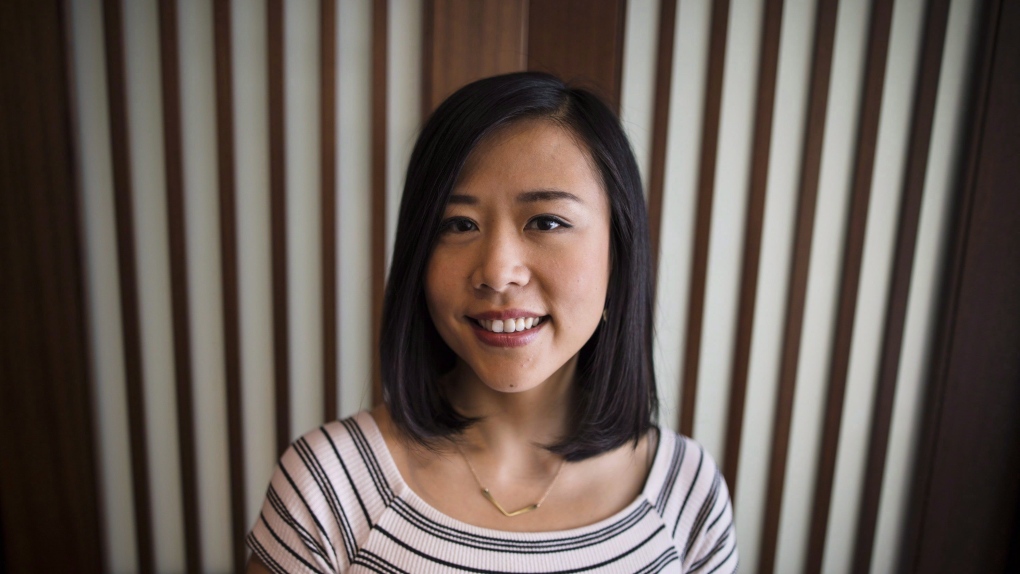 Domee Shi, director of the Pixar short film "Bao, " poses for a photo at the Shangri La Hotel in Toronto on Monday, June 11, 2018. (THE CANADIAN PRESS/ Tijana Martin)

TORONTO -- It's a film scene that would mesmerize any foodie: A close-up shot of a woman's hands as she deftly folds a pocket of dough filled with pork and vegetables into a perfectly pleated dumpling.

It lasts just a few seconds in "Bao," the Oscar-nominated Pixar animated short from Toronto-raised Domee Shi, but it took much longer to depict.

"That took two effects artists over two months to create that shot," Shi said in a recent phone interview.

"It was really difficult to get the pork filling to look right and for the dough to fold in the right way. We also needed to make the pork filling look good, which is hard to do -- because real, raw pork doesn't look good."

Food and family are at the heart of "Bao," for which Shi is up for an Oscar on Sunday alongside producer Becky Neiman-Cobb. The category also includes Canadians Trevor Jimenez for "Weekends" and Alison Snowden and David Fine for "Animal Behaviour."

The other nominees for best animated short are Ireland's "Late Afternoon" by Louise Bagnall and Nuria Gonzalez Blanco, and the Chinese/American production "One Small Step" by Andrew Chesworth and Bobby Pontillas.

The eight-minute "Bao" is a charming look at a married Chinese-Canadian woman with empty-nest syndrome who dotes on an adorable little dumpling that miraculously springs to life at the dinner table. Together they ride on Toronto's public transit system, go grocery shopping in Chinatown, and practise tai chi in a park as the CN Tower appears in the background.

The film got a huge platform last summer when it played in theatres as the accompaniment to "Incredibles 2."

It's also a milestone for Pixar, as its first short directed by a woman and the first helmed by an all-female writer-director-producer team.

"The most difficult process was probably getting the food to look right, because food is organic and it changes shape a lot," Shi said from the Pixar Animation Studios in Emeryville, Calif., where she is now developing a feature film.

"Computer animation is good at making hard, symmetrical objects look good, but it has a more difficult time with organic, soft objects."

Shi was born in Chongqing, China and moved to Toronto with her family when she was two. "Bao" was one of three short film ideas she had presented to a panel of Pixar representatives as part of an open call for pitches at the studio in 2015.

"It was kind of like 'American Idol,' because I think I was one of about 50 or so people that pitch," Shi said.

"'Bao' was my favourite one out of all of them.... Then they ended up picking it, because the ending shocked them so much, but that's why they loved it."

The film is inspired by Shi's upbringing and the strong women in her life.

I'm an only child, so I've always been that overprotected little dumpling for my whole life," she said. "I just wanted to use this short to explore that relationship between an overprotective parent and a child, using this magical metaphor."

Like the mother in the film, Shi said her mom is "very strong, very stubborn, shows her love with food and actions more than words."

Meanwhile, her grandmother is in her mid-90s and still plays the tile-based game Mahjong every Friday night.

"I wanted to tell a story about this very strong character," she said. "And I just love food so much, too, so I really wanted to incorporate the food-making process into this short.

"It's just so fascinating to me to watch food being prepared, seeing all the love and attention and care that goes into making it. And you don't see a lot of food preparation scenes in animated films in the West.

"I wanted to show the step-by-step process of making a dumpling and share it with lots of people who might not know what a dumpling even is."