Documentary to showcase real people who inspired 'Come From Away' characters 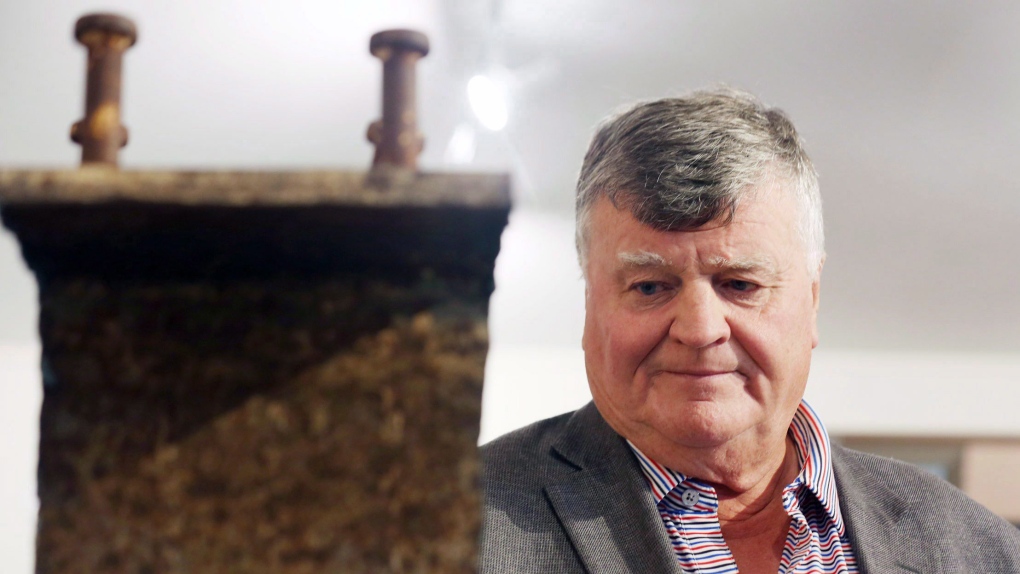 Longtime Gander mayor Claude Elliott views the recovered metal from the Twin Towers at the North Atlantic Aviation Museum in Gander, Nfld., on Saturday, October 29, 2016. Elliott and other Gander residents will be spotlighted in the upcoming documentary "You Are Here: A Come From Away Story." (THE CANADIAN PRESS / Paul Daly)

On his first day of filming in Gander, N.L., filmmaker Moze Mossanen found himself locked out of the shooting location.

A crew member called Claude Elliott, Gander's mayor. Elliott picked up the phone right away, and later invited them over for Jiggs dinner -- a traditional Newfoundland meal.

A few days later, the mayor of nearby Appleton did the same thing.

"I can't say that about every city I visit," Mossanen recalled in a phone interview from Toronto.

Mossanen's experience in Gander wasn't so different from that of the people featured in his new documentary "You Are Here: A Come From Away Story."

The film offers a closer look at the real people behind the now world-famous story of the central Newfoundlanders who opened their arms to thousands of airline passengers and crew members stranded when U.S. airspace was closed following the 9/11 attacks.

The production will premiere on HBO Canada and CraveTV on Sept. 11, the 17th anniversary of the tragedy. A special screening was to be held Saturday for Gander's residents.

The remarkable story inspired the hit musical "Come From Away." Like many others, Mossanen was intrigued when the original production out of Ontario's Sheridan College became a Broadway hit.

But the filmmaker set out to shine a spotlight on the real people who stepped up to comfort thousands in a time of confusion and mourning.

Even knowing the story well, Mossanen said he was still blown away by the kindness of the people he met when working on the film.

"I was actually more surprised as to how deep their act of kindness went and how it manifested itself," said Mossanen.

Mossanen also found the hospitality and friendliness of the small town's residents reminded him of his own childhood.

"I was kind of surprised to discover that they kind of look like Persian Jews. They have the same kind of openness and generosity that I grew up with in my family."

Writing a film about a massive global tragedy and a wildly popular play came with the challenge of telling the story in a new light, but the lengthy post-production process uncovered a wealth of first-hand footage from locals, passengers and news outlets around the world.

The team chased down archive film from newscasts as far as the Netherlands and home footage from people on the planes.

"It was actually digging for gold," said Mossanen. "The more you looked the more something else came up."

The film tells the story chronologically, following the events as they unfolded through the eyes of people who were there.

The musical only enters the plot in the final act, but Mossanen still found there were parallels between his process and the way the authors described writing the musical.

He was also forced to decide what stories to include in the narrative and felt a little bit of uncertainty over how a story about 9/11 with a positive message would be received. But the success of the play suggests an audience that's receptive to the true story's uplifting message.

"It's a story that reaffirms a lot of our great values at a time when everything is being challenged," said Mossanen.

He highlighted one scene when a delegation of Newfoundlanders visited the Ground Zero memorial in New York City, hearing stories from emergency responders who were there on the day of the attack.

"For me, those are two sets of first responders meeting at Ground Zero -- the ones, of course, who were pulling bodies out of the rubble, and of course the Ganderites that were helping on another part of the world, said Mossanen.

"So I think there's a point being made there, we're all in this together."