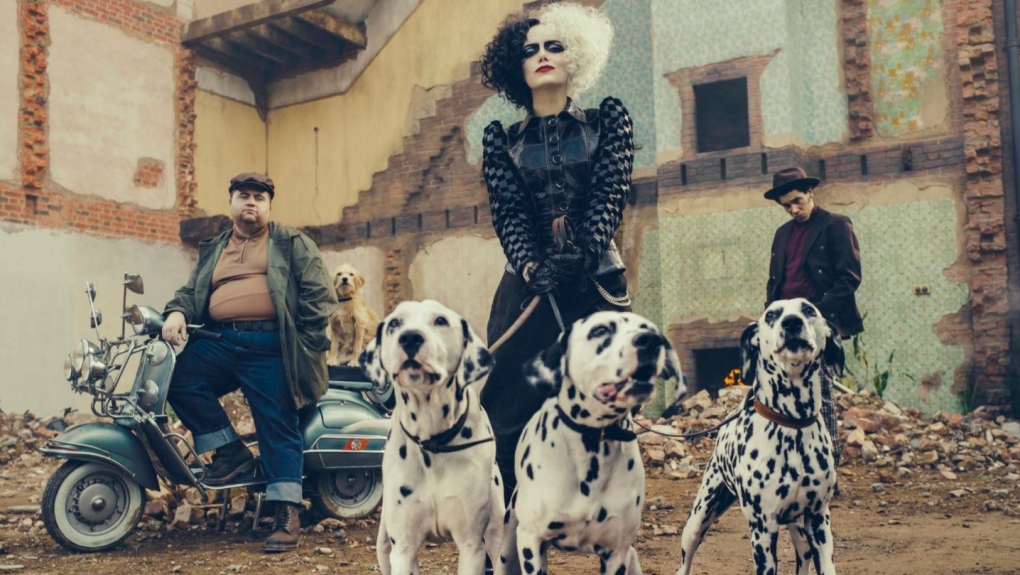 Disney has revealed a sneak peek of Emma Stone as Cruella de Vil in a punk-rock re-imagination of the classic movie villain. (Walt Disney Studios/Twitter)

Disney has offered a sneak peek of Emma Stone as Cruella de Vil in a punk-rock re-imagination of the classic movie villain.

The Oscar-winning actress appears dressed in leather and joined by three Dalmatians in a photo posted Saturday by Walt Disney Studios.

Stone, who is depicted sporting the stylish villain’s famous two-tone hairstyle, will star in the title role in Disney’s “Cruella,” due for release in May 2021.

According to movie and TV review site Rotten Tomatoes, the new movie will focus on a young Cruella in 1970s London.

Disney fans were beside themselves with excitement at the announcement at the D23 Expo in California, a biennial event organized by the official Disney fan club.

IMDb, the internet movie database, tweeted that Stone said hello to fans at the event in a taped recording from the film’s set in London.

Disney said the film will also star Hollywood veteran Emma Thompson, Paul Walter Hauser and Joel Fry. It will be directed by “I, Tonya” filmmaker Craig Gillespie, according to Variety.

The character was first created by English author Dodie Smith in her 1956 novel “The Hundred and One Dalmatians” and later adapted in Disney’s animated and live action children’s movies.

Glen Close was the last actress to play the role in 2000’s “102 Dalmatians.” Close received a lot of love online following Saturday’s announcement, with many fans suggesting that her performance will be hard to top.

There was also some backlash at the prospect of another Disney remake.

“I sure this will paint her as being misunderstood and a victim just like in ‘Maleficent’,” tweeted Robert J, referring to the 2014 Disney movie starring Angelina Jolie.

Jolie was also at D23 this weekend to promote “Maleficent: Mistress of Evil.”

“I draw her all the time. When the casting announcement of Emma Stone as Cruella came out I had mixed feelings about her, but she looks amazing! I can't wait!”

There was a raft of announcements at the expo including new Marvel and Star Wars TV series due for release on Disney’s upcoming streaming service Disney+, which is set to launch in Canada in November.