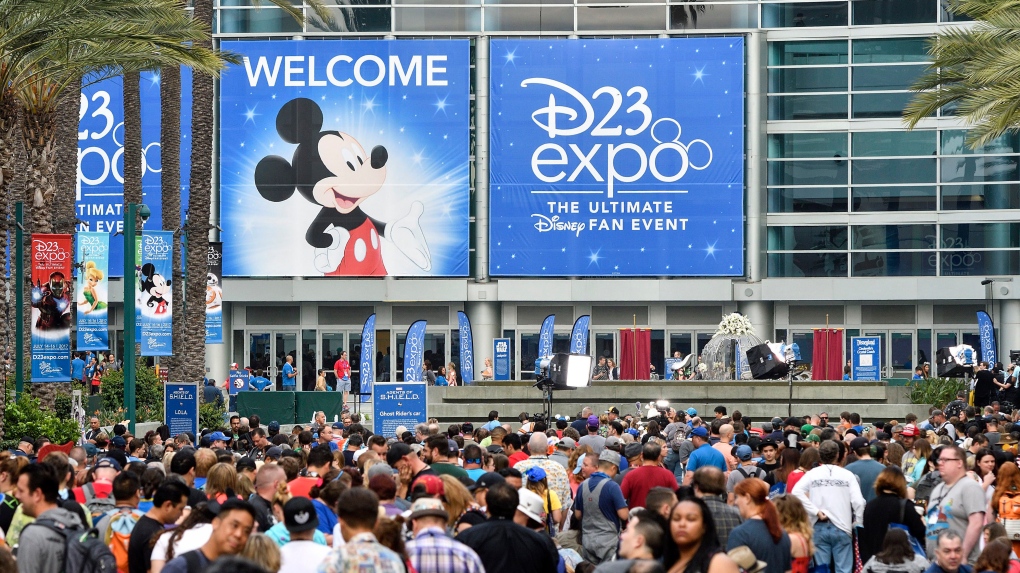 A crowd of people wait to enter the D23 Expo as crews do interviews outside the Anaheim Convention Center in Anaheim, Calif., on Friday, July 14, 2017. (Jeff Gritchen/The Orange County Register via AP)

ANAHEIM, Calif. -- When it comes to Disney, they like to keep it in the family, whether it's getting a football team's worth of original Disney princesses to cameo in "Wreck-It Ralph 2," reuniting "The Incredibles" fourteen years after the original film hit theatres, or securing a new director for "Toy Story 4."

John Lasseter, the chief creative officer of Pixar and Walt Disney Animation Studios, led a confetti, joke and song-filled presentation of the upcoming animation slate for the studio Friday at the star-studded biannual fan convention D23 in Anaheim, just steps from Disneyland with appearances of people from Kristen Bell to Samuel L. Jackson.

Sporting his signature Disney-themed Hawaiian shirt (this time with "Inside Out" characters) Lasseter, who was also identified as a "former Jungle Cruise Skipper," announced that he would no longer be directing "Toy Story 4." The job is going to "Inside Out" screenwriter Josh Cooley, who was previously going to co-direct with Lasseter. He assured the thousands of fans in attendance that he would be mentoring and guiding Cooley through the process as an Executive Producer. "Toy Story 4" is set for a June 2019 release.

Disney is also getting its most beloved princesses together from Ariel to Mulan for "Wreck-It Ralph Breaks the Internet," in a humorous scene in which Sarah Silverlman's Valellope decides to mess with the princesses and finds them to be cooler than she expected.

Lasseter also announced that Taraji P. Henson would be joining the cast as well as an internet savvy character named Yesss (with three s's). The film finds Wreck-It Ralph (John C. Reilly) and Valellope exploring the internet in hopes of finding an essential replacement part for their arcade game.

Fans also got a sneak peek at "The Incredibles 2," which will be out in June 2018 and focus on Holly Hunter's Elastagirl while Craig T. Nelson's Mr. Incredible stays at home. The scene featured the baby, Jack Jack, getting into a scuffle with a raccoon and showing off some wild powers (think: laser eyes and self-cloning).

Lasseter also showed concept footage of a plane breaking a sound barrier test from a secretive and untitled new film set for an April 2019 release.

"Trust me when I say this, it is harder to think of a title than to get to space," he said.

Olaf actor Josh Gad later ribbed Lasseter for the untitled and tentative films when they moved on to discussing "Frozen 2," set for Nov. 2019.

D23, which is a nod to the year 1923 in which Walt Disney founded the company, runs through Sunday.