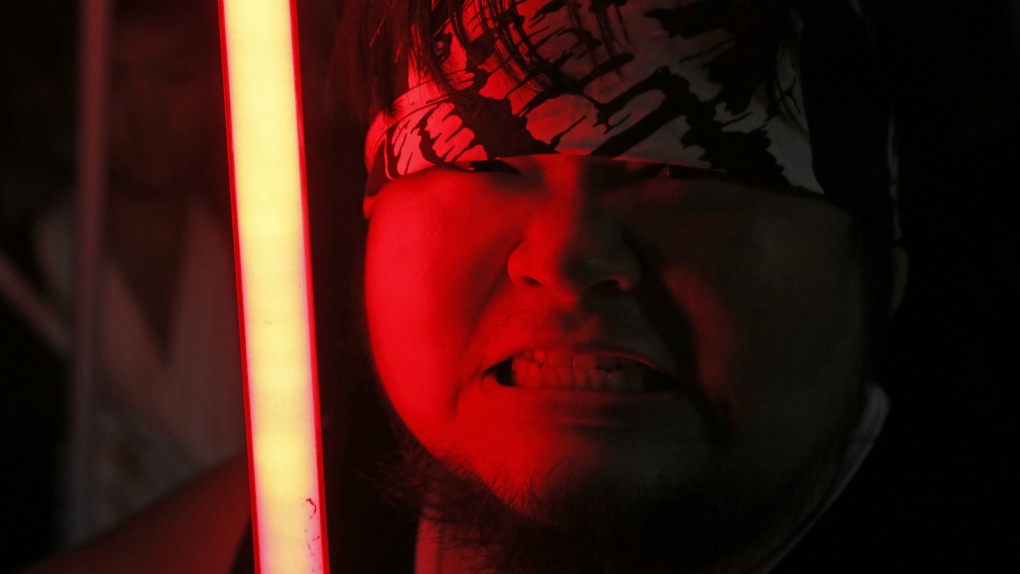 TAIPEI, Taiwan -- This is not your father's lightsaber, Luke. This is not the weapon of a Jedi Knight, but the handcrafted replica of a Taiwanese man who disliked the official "Star Wars" products, started making his own blades and now sells them for up to $400 each.

It's a booming business for Tsai Jung-chou, enough for him to quit his optical engineering job three years ago and make models of the iconic sci-fi weapon full-time. He says his mailbox is flooded with orders from fans around the world.

The 32-year-old says his model, a metal hilt attached to a glowing polycarbonate tube, is the brightest and strongest on the market, strong enough to use in gentle duels. He even offers to replace or fix those that break in mock combat.

And while it won't cut metal, his lightsaber certainly sounds like the real thing when it's turned on, with a motion-sensor soundboard that generates the humming and buzzing heard in the movies.

Producing a realistic replica of the fictional weapon was a decade-long quest for the Tsai, who is better known by his alias Makoto Tsai.

He was smitten when he first saw "Star Wars Episode II: Attack of the Clones" in 2002. But he was sorely disappointed with the lightsaber he bought from the franchise. The light was dim and the blade seemed wimpy.

So he decided to build his own. He enrolled in an optical engineering school at a Taiwanese university and asked professors for advice.

"I was just a student. I didn't have lots of money," he said. "So I thought I should just make one myself because I like to make things myself anyway."

Tsai went on to work as an engineer for a high-power laser design company.

After years of experimentation, he came up with a design using an LED light strip that lights up in sequence, giving a scrolling effect as it powers up.

Tsai posted video clips of his handicraft on YouTube and other Internet sites, which were then reposted on Star Wars fan websites. Soon he had people contacting him and offering to pay for what he calls "Makoto's lightsaber."

Each model takes two to three days to finish, Tsai says. Prices range from $200 to $400 for the top models. He also provides upgrades to any current or older models. He hasn't kept track of how many he has made, but produces about 10-15 a month since he went full-time in 2012.

In the days leading up to the premier of the newest installment, "Star Wars: The Force Awakens," Tsai hung out with his friends dressed in Star Wars character costumes -- and was busily making more lightsabers.

"I am actually happy that Disney has bought this movie franchise. They brought all the old characters -- Luke, Princess Lea and Han Solo," he said. "I watched the trailer so many times and every time I cry. I get so emotional."

As for now, Tsai has no plan to expand his business. For him, becoming a master lightsaber maker is a dream come true.

Does he ever worry what he would do for a living if lightsabers faded in popularity?