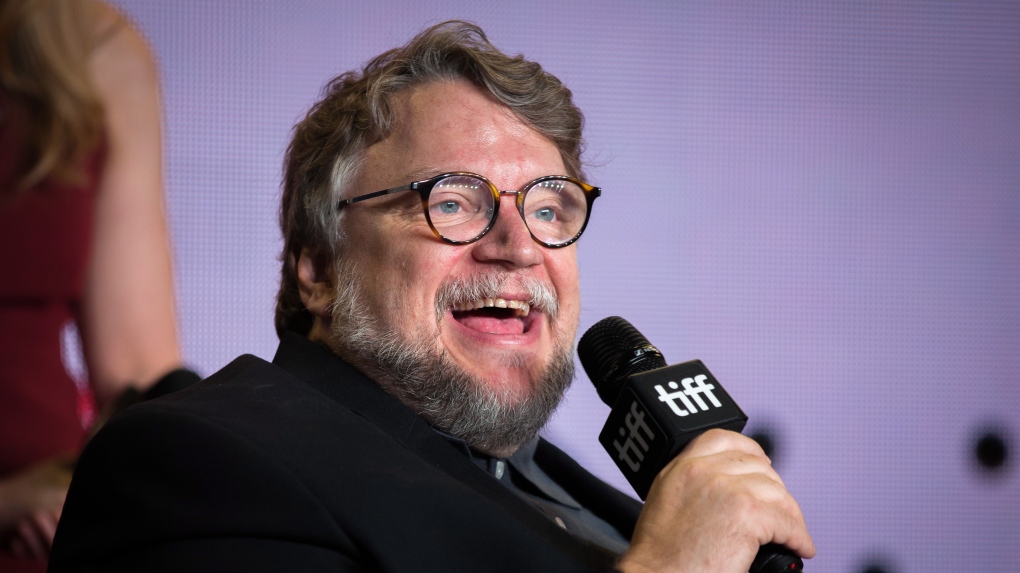 Director Guillermo del Toro speaks during a press conference for the movie 'The Shape of Water' at the Toronto International Film Festival on Monday, September 11, 2017. (Chris Donovan / THE CANADIAN PRESS)

TORONTO -- If the Toronto International Film Festival has proven one thing, it's that Guillermo del Toro can work a room.

At the premiere of his festival sensation and surefire Oscar contender "The Shape of Water," the good-humoured Mexican director had the audience of the Elgin Theatre in his thrall, both by the magic of his monster romance and by his self-deprecating sincerity discussing the film's political relevance (proclamations to "make America great again," he said, were a "false memory" of the segregated early '60s in which his film is set) as well as his own fondness for his adopted home of Toronto.

"The Shape of Water," which Fox Searchlight will release Dec. 8, has been an undeniable breakout on the festival circuit, where it took the top prize at the Venice Film Festival over the weekend.

The film, which stars Sally Hawkins as a mute woman who falls for a captured sea monster, is a loving tribute to outsiders of all kinds -- a message that has been received by festival audiences as a vitally relevant one.

Shortly after flying back to Toronto, award in tow, Del Toro sat down to discuss his abiding affections for monsters, movies and water.

AP: Why do you think your film is resonating as it is?

Del Toro: For the last few years -- and I don't think it started two years ago -- we've seen the world going in the wrong swing of the pendulum. It causes such despair and the heart of the movie is so utterly sincere that sometimes the most shocking thing in this world is sincerity. There is something that kind of touches you. It's like when you meet someone who just exists, who's very real and just present. The movie is very present, and it wears its heart on its sleeve in the sense that it's unapologetically not a regular movie.

AP: How did you fall in love with monsters?

Del Toro: It happened when I was a young kid. Every Sunday in my hometown, channel six would show a marathon of monster movies. So I saw "It Conquered the World," "The Bride of Frankenstein," "Creature of the Black Lagoon," "The Incredible Shrinking Man," "The Monolith Monsters." I would watch "The Raven," "The Black Cat," "Body Snatchers." It was every Sunday. I would go to church and I would see these monsters. They became almost an iconography. Frankenstein to me is a messiah, crucified for sins. They became almost saintly pagan figures.

AP: Why did you identify with them?

Del Toro: I saw I felt out of place since I was very young. I'm talking 2, 3, 4 years old. I saw the creatures and I thought: I'm like that. I'm that. One Christmas, I got a scar on my forehead and I didn't want it to completely heal, to have my Frankenstein scar. When the performer is great -- like in the cases of Boris Karloff who brought so much vulnerability to that part -- you get this paradox that the thing you should be scared off, you find compassion and love for. And that's essentially what I do.

AP: You here use water very evocatively, and you've compared water, which can flow anywhere, to love.

Del Toro: It is an element that has an enchantment on me. My physique may not prove it but I'm a great swimmer and a great diver. I've been diving since I was a kid. I almost went into a competition. My family had a pool and I spent sometimes entire afternoons, entire weeks almost all the time underwater. Other kids dream that they can fly. My recurring dream is that I can breathe underwater.

AP: Do you think the movies could use more magic in them?

Del Toro: Hopefully the first magic that it can invoke is cinema. It's a movie in love with love and in love with cinema. It's shot like a musical, the way the camera moves in a very classical movie. It's a love story between an amphibian man and a woman, shot by Douglas Sirk with musical numbers and a Cold War thriller.

AP: You've said cinema is sustaining for you. Like which films?

Del Toro: Capra does that for me. I share a spirit with him. When people talk about Capra, a lot of them talk about the corny, syrupy, happy parts. But most people forget that the reason those work is that Capra, like Disney and Dickins, goes really dark. George Bailey running through the abandoned town where no one remembers him is as close to Kafka and horror as you can get. I share that attraction to combining the sweet and the dark, the violent and the tender. He uplifts my spirits every time. I cannot not cry on "Meet John Doe." I cannot not cry on "Mr. Smith." I cannot not cry on "It's a Wonderful Life." It breaks me. I start weeping. I cry at my movie, every time. I know how it ends. I've seen it 185 times and every time the final image comes, I'm overwhelmed.