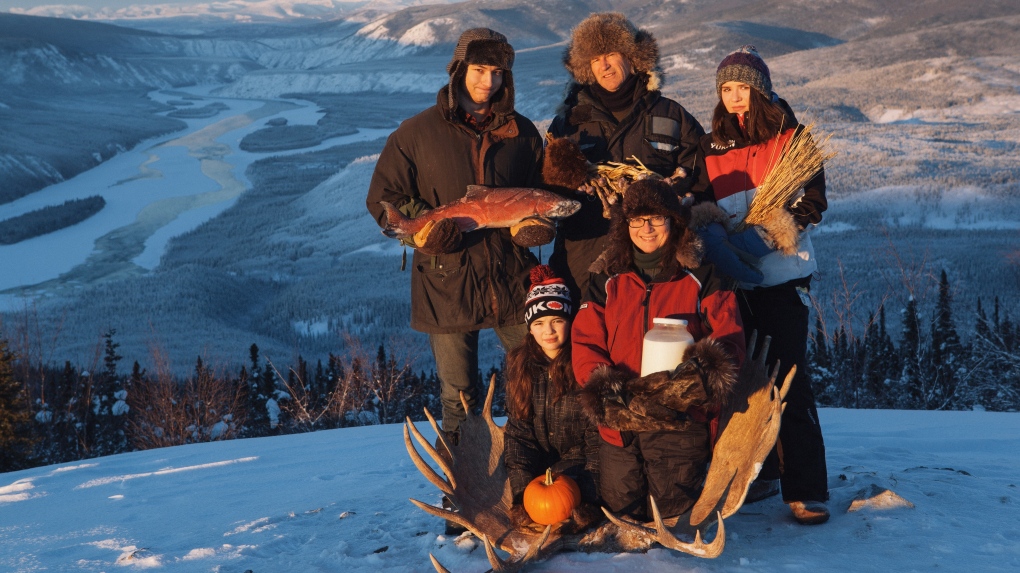 A scene from the documentary "First We Eat" is shown in this undated handout photo. THE CANADIAN PRESS/Hot Docs

Filmmaker Suzanne Crocker had a wake-up call a few years ago when the only road in to her hometown of Dawson City, Yukon was cut off due to a landslide.

It made her realize just how dependent the town was on that route to bring products to the community of about 1,500. Crocker started questioning how long it took some food items to actually reach the dinner table and began learning more about it.

She eventually decided to see if her family could eat only local food for an entire year. The effort was captured in the documentary "First We Eat," which became a learning experience about family dynamics, resourcefulness and the strengthening of community bonds.

"There is just this very humbling experience when you know where every ingredient on your plate comes from," Crocker said. "And like you really know. You knew the animal, you knew the hands that grew it, you knew the land that provided it.

"It's a pretty special connection. So I would say it's been, for me, transformative in many ways."

The film's world premiere is Thursday as part of Hot Docs 2020. The 104-minute documentary, distributed in Canada by "Blue Ice Docs," runs online through the festival until June 6.

Filming began in the summer of 2017 as Crocker banished all grocery store food from the house. For 12 months, her family would only eat food that was hunted, fished, gathered, grown or raised around Dawson City.

Cupboards were cleared and the spice racks were too. No salt, no sugar -- and no caffeine either. Tea and coffee habits ended cold turkey.

"Certainly the family dynamic was ever-present during the year and trying to stave off mutiny was ongoing," Crocker said with a laugh. "I really had thought that I would be able to win my kids over through their stomachs with me in the kitchen cooking all the time for them."

Farmers and local community members got involved. Ice fishing and moose hunting helped provide protein, birch trees were tapped for sap and grounds around their home were explored for edible plants and flowers.

The back-to-basics approach had its challenges at times, especially with the frigid weather in the north. Storage skills were put to the test. Crocker, who said she didn't like to cook before starting the project, became quite proficient in the kitchen.

"I thought that I was going to suffer a bit missing some of my favourite foods and the usual things that are in my cupboard," she said. "And I quickly found that after a month or two, I didn't even miss them at all.

"So that was pretty cool to know how adaptable we are as humans."

Crocker, who also served as director, producer and cinematographer, also noticed improvements on the health front. Her high blood pressure returned to normal, she slept better and had more energy.

The documentary's release comes at an interesting time given the onset of the COVID-19 pandemic. Traditional skills like gardening and baking have become more popular.

"When a crisis hits, you realize that it's really in our own community that we turn because our dependence on infrastructure and a centralized system from far away is so fragile really," Crocker said. And we realize how fragile that is and how vulnerable we are when something like the pandemic hits or a road gets closed by a landslide or a forest fire or whatever.

"I'm a strong believer in the more we can do locally, the better."

Crocker also directed "All the Time in the World," which appeared at Hot Docs in 2015. In that documentary, Crocker and her family moved to a remote part of the Yukon and spent nine months living in a small cabin without electricity and running water.

It was named most popular Canadian documentary at the Vancouver International Film Festival and the film was screened in over 25 countries.