Cooking shows, podcasts: Connecting with the Raptors in off-season 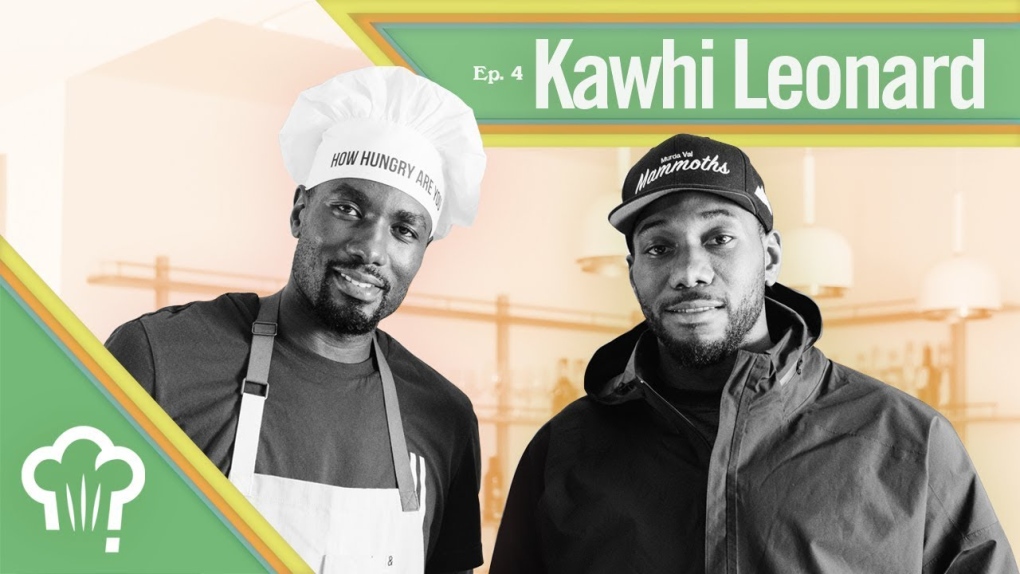 When the Toronto Raptors disperse for the off season after basking in the celebrations of their NBA championship glory, fans will be able to keep up with the players in a number of ways including their YouTube channels, podcasts and even cooking shows. (Serge Ibaka/YouTube)

After the Toronto Raptors finish basking in NBA championship glory, many fans might be craving an off-season connection with the team’s stars, such as Kawhi Leonard, Danny Green or Serge Ibaka.

But they’ll be happy to know that, beyond the team’s official social media channels, plenty of the players each have their own things cooking.

When power forward Serge Ibaka isn’t driving to the hoop, he trades his Raptors’ jersey for a chef’s hat.

Some of his more videos, called “How hungry are you?”, feature the Raptors star preparing meals with teammates such as Kawhi Leonard and Kyle Lowry, testing Jeremy Lin’s sense of smell and even whipping up a feast for brothers Marc and Pau Gasol.

In some of his videos, the Congolese-Spanish player even whips out his fluent Spanish. In a viral video from “Live with Jimmy Kimmel,” he had him yukked it up en espanol with the late-night comedian’s sidekick Guillermo.

Raptors’ guard Danny Green will be one of the easier players to keep up with as he co-hosts “Inside the Green Room,” which is described as offering an “inside look into the life of a current NBA veteran.”

The podcast staRted late last year and he co-produces it with sports reporter Harrison Sanford, who’s covered the league for years.

Round 2 is here and a new episode of @insidegreenroom is too. Me and @hidefsanford chopped it up about the first series, Game of Zones, and a lot more. Inside the Green Room with Danny Green on iTunes, Spotify, and @yahoosportsca on YouTube.

Although he was barely on the court during the NBA playoffs, the point guard hosts a YouTube channel with 675,000 subscribers.

He’s created videos with popular YouTube personalities such as Nigahiga and KevJumba.

His popularity even led to a content partnership with Whistle Sports Network that saw him become the first athlete from the big major U.S. sports leagues on the platform.

Point guard Kyle Lowry doesn’t have any big YouTube following -- besides others compiling highlight reels -- but he and his wife have founded the Lowry Love Foundation.

Since 2013, he and Ayahna Cornish-Lowry have been running the charity aimed at “improving the lives of the underprivileged and disadvantaged of Philadelphia and Toronto.”

These include food drives, gift-giving programs during Christmas and free turkey dinners during Thanksgiving.

You can also keep up with Lowry and his family on his Instagram accounts, where he posts pictures of his children, throwback pictures, and him joshing around with his teammates.

The Rockford, Ill. native is not only a massive star in Toronto but gets a lot of love from his hometown.

His city even held their own Jurassic Park festivities -- copying the fan-game-viewing area just outside of the Scotiabank Arena in Toronto.

But in his downtime, “Steady Freddie” started his own apparel company Bet on Yourself, which he’s said he’s using as a way to learn the ins-and-outs of entrepreneurship.

Although it’s still up in the air whether two-time MVP Kawhi Leonard will stay with the Raptors, you won’t likely won’t be hearing from him on Twitter. Or Instagram. Or anywhere online, really.

The “fun guy” has largely avoided social media throughout his career and largely made his statements through his play on the court. Despite his apparent distain for celebrity, he’s made a point of using his fame to highlight philanthropy and being a role model for youth.

In his early years, he hosted camp for youth in San Diego, where he played college basketball, and Los Angeles where he is from.

During interviews, he said he was inspired by Earl Lloyd, the NBA’s first African-American. And some writers suggest that the way to gain Leonard’s heart isn’t through offering him free condos, but through making donations in his name, boosting sports programs for at-risk youth or charities that offer respite care for families like Kawhi has done.

Raptors players overwhelmed by the 'amazing' love of their fans

Cooking shows, podcasts: Connecting with the Raptors in off-season