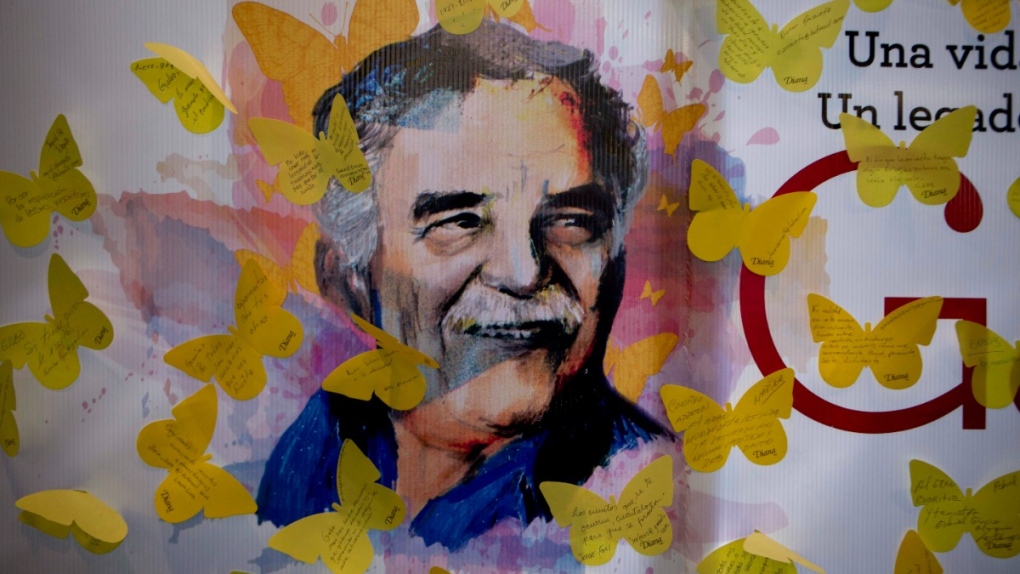 A placard of Nobel Prize-winning novelist Gabriel Garcia Marquez is surrounded by yellow butterfly cutouts with messages, placed there by fans, at a bookstore in Mexico City, on April 17, 2015. (Eduardo Verdugo / AP)
BOGOTA, Colombia -

For decades renowned Colombian author Gabriel Garcia Marquez kept the public from knowing about an intimate aspect of his life: He had a daughter with a Mexican writer, with whom he had an extramarital affair in the early 1990s.

The closely guarded secret was published by Colombian newspaper El Universal on Sunday and confirmed to the Associated Press by two relatives of the Nobel Prize-winning author, who is famous for novels like One Hundred Years of Solitude and Love in the Time of Cholera.

Garcia Marquez died in Mexico City in 2014, where thousands of his readers lined up to see his casket in a concert hall. He was married for more than five decades to Mercedes Barcha and the couple had two children named Rodrigo and Gonzalo. They lived in Mexico City for much of their lives.

El Universal said that in the early 1990s Garcia Marquez had a daughter with Susana Cato, a writer and journalist who worked with Garcia Marquez on two movie scripts and who also interviewed him for a 1996 magazine story. Cato and Garcia Marquez named their daughter Indira: She is now in her early 30s and uses her mother's surname.

Shani Garcia Marquez, one of the writer's nieces, told the AP that she had known for years about her cousin Indira, but had not mentioned her to the media because her parents always asked her to be discrete about her uncle's personal life.

Gabriel Eligio Torres Garcia, who is also a nephew of the Colombian writer, said he has been in touch with Indira Cato through social media, though he has never met her in person.

"My cousins Rodrigo and Gonzalo told me about her casually during a reunion," he said.

Other members of Garcia Marquez's family, cited by El Universal, said they had not spoken about the writer's daughter previously out of "respect" for Mercedes Barcha who died in August 2020. Torres Garcia said that Indira Cato's mother, Susana, had also been discrete about her daughter's lineage, to keep her away from the media spotlight.

Indira Cato is now a documentary producer in Mexico City. She won several awards for a 2014 documentary on migrants passing through Mexico.

Garcia Marquez' family said they didn't want to share her contact information because they were not authorized to do so, and the AP could not contact Indira Cato independently.

"She leads a very artistic lifestyle, like many people in this family," said Shani Garcia. "It makes us very happy that she has shined on her own."

Candidates running for leadership of the federal Conservative party will appear on stage tonight for its French-language debate.