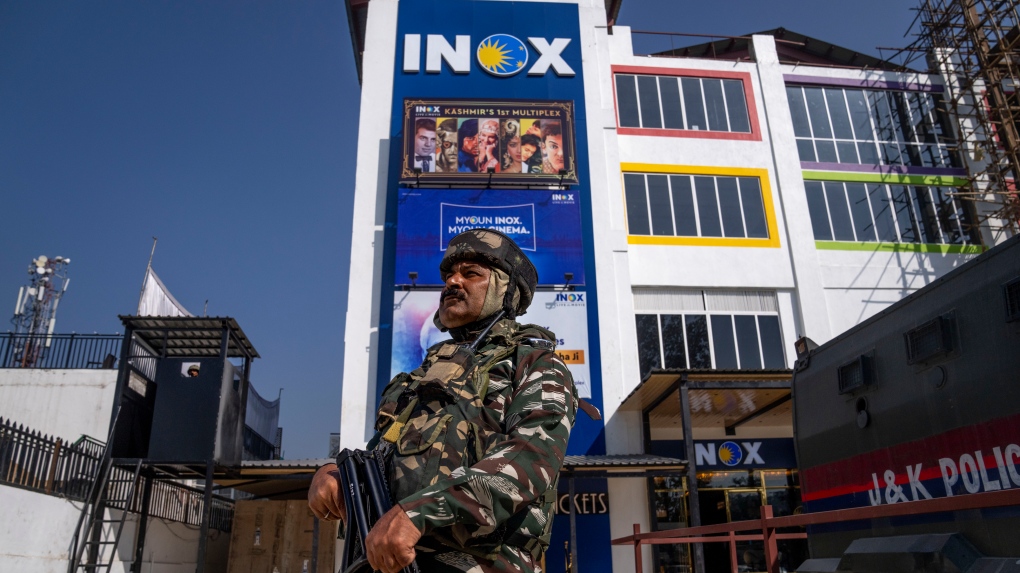 A paramilitary soldier stands guard outside the first multiplex cinema of Kashmir in Srinagar, Indian controlled Kashmir, Friday, Sept. 30, 2022. The multi-screen cinema hall has opened in the main city of Indian-controlled Kashmir for public for the first time in 14 years. The 520-seat hall with three screens opened on Saturday, Oct. 1, amid elaborate security but only about a dozen viewers lined up for the first morning show. (AP Photo/Dar Yasin)
SRINAGAR, India -

A multiscreen cinema hall opened on Saturday in the main city of Indian-controlled Kashmir for the first time in 14 years in the government's push to showcase normalcy in the disputed region that was brought under India's direct rule three years ago.

Decades of a deadly conflict, bombings and brutal Indian counter-insurgency campaign have turned people away from cinemas, and only about a dozen viewers lined up for the first morning show, the Bollywood action movie "Vikram Vedha." The 520-seat hall with three screens opened under elaborate security in Srinagar's high security zone that also houses India's military regional headquarters.

"There are different viewpoints about (cinema) but I think it's a good thing," said moviegoer Faheem, who gave only one name. "It's a sign of progress."

The afternoon and evening shows had less than 10% occupancy on Saturday, according to India's premier movie booking website in.bookmyshow.com.

The multiplex was officially inaugurated on Sept. 20 by Manoj Sinha, New Delhi's top administrator in Kashmir. The cinema is part of Indian multiplex chain Inox in partnership with a Kashmiri businessman.

After Kashmiri militants rose up against Indian rule in 1989, launching a bloody insurgency that was met with a brutal response by Indian troops, the once-thriving city of Srinagar wilted. The city's eight privately owned movie theatres closed on the orders of rebels, saying they were vehicles of India's cultural invasion and anti-Islamic.

However, three cinema halls, backed by government financial assistance, reopened in 1999 amid an official push to project the idea that life had returned to normal in Kashmir. Soon after, a bombing outside one hall in the heart of Srinagar killed a civilian and wounded many others and shut it again. Weary Kashmiris largely stayed away, and the other hall locked its doors within a year. One theatre, the Neelam, stuck it out until 2008.

Officials said the government is planning to establish cinemas in every district of the region, where tens of thousands have been killed in the armed conflict since 1989. Last month, Sinha also inaugurated two multipurpose halls in the southern districts of Shopian and Pulwama, considered as hotbeds of armed rebellion.

"The government is committed to change perceptions about Jammu and Kashmir, and we know people want entertainment and they want to watch movies," Sinha told reporters at the inauguration.

In 2019, India revoked the region's semi-autonomy and brought it under direct control, throwing Kashmir under a severe security and communication lockdown.

The region has remained on edge ever since as authorities also put in place a slew of new laws, which critics and many residents fear could change the region's demographics.

The former CEO of the failed cryptocurrency exchange FTX said Wednesday that he did not 'knowingly' misuse customers' funds, and said he believes his millions of angry customers will eventually be made whole.