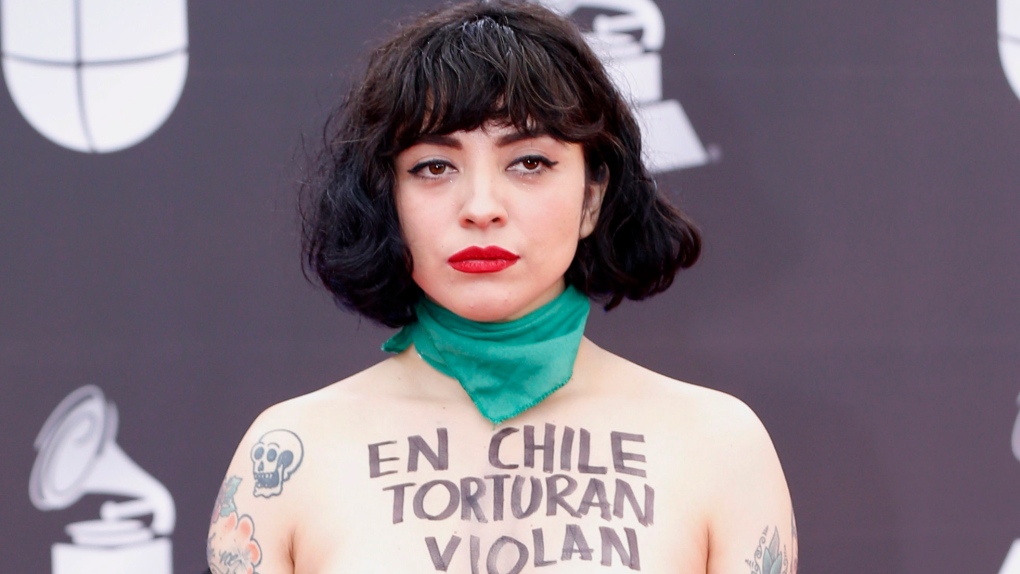 TORONTO -- Chilean singer Mon Laferte exposed her breasts on the red carpet at the Latin Grammys Thursday, revealing a political message written across her chest in support of anti-government protests in her country.

The 26-year-old artist walked the red carpet in a black belted coat, removing it to reveal a hand-written message that read, “En Chile torturan violan y matan,” which translates to “In Chile, they torture, rape and kill.”

At least 20 people have died during violent anti-government clashes in Chile over the last month.

The unrest began in October over a hike to subway fares, but has grown into a massive movement demanding a broad span of political and economic changes.

The violent clashes have led to thousands of arrests and police brutality, including an incident where hundreds were blinded after police fired pellet guns during demonstrations.

Chile’s right-centre government has responded with a series of proposed changes, including a minimum-wage increase, but many Chileans call these moves a Band-Aid solution to decades-old social inequality that has been unresolved since Chile returned to democracy in 1990 after a 17-year dictatorship.

Laferte, who won the Grammy for best alternative album, was praised on social media for supporting her home country. In an Instagram post, the singer posted a picture from her red carpet stunt writing, “My free body for a free homeland.”

On Saturday, the Chilean artist released a new song titled “Plata Ta Ta.” According to an Instagram post, translated from Spanish, the singer said she recorded the song after feeling “uncomfortable, sad and angry about everything that happens in Chile.”

“So I send you the message again. We are not afraid,” reads the post.

Protesters won a victory Friday after the national congress agreed to hold a referendum next year to draft a new constitution. However, politicians say they have to figure out how to move the process along quickly in the midst of escalating violence.