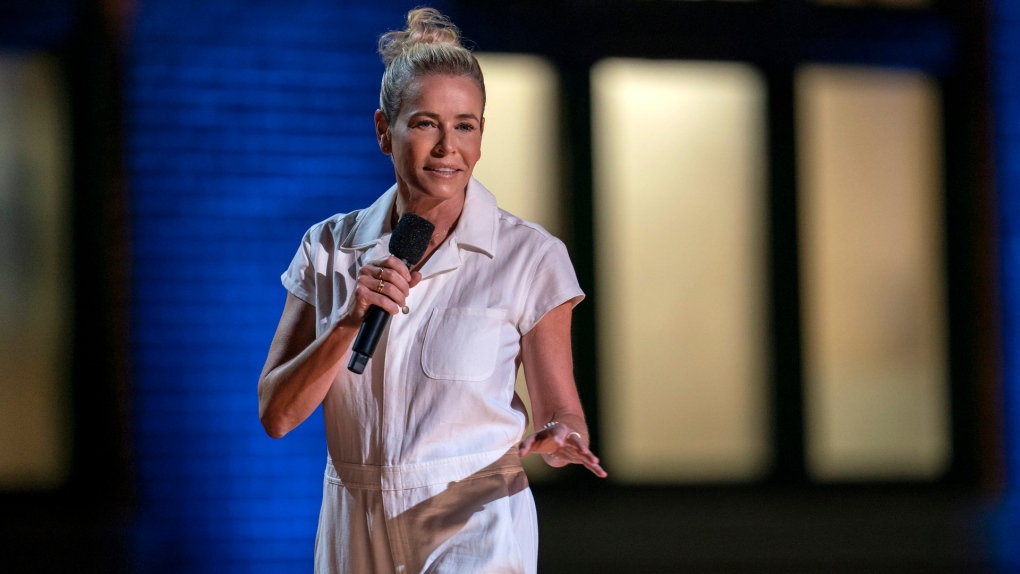 NEW YORK -- When Chelsea Handler decided to pursue therapy, the comic may not have realized the level of introspection she'd encounter.

"It was nice to find out why I've been such a b---- for so long, and to also gain self-awareness. To know that, 'Oh, I came across that way? I had no idea," said the comedian. "I think the gift of self-awareness through therapy is one of the best gifts you can ever receive because there is no price tag for that, and it puts you in your place. It humbles you."

Therapy is one of the many subjects Handler tackles in her new stand up, "Evolution," out Friday on HBO Max. It's a personally ambitious project for both its content and logistical creation. Filmed at the Central Railroad Station in her home state of New Jersey, it's one of the only major comedy specials filmed during the coronavirus pandemic.

"It's honestly a pretty depressing time, and that's why it was kind of important for me to: A, get myself out of my house and go do something productive, which was film the special. But B, also bring some joy and laughter to this time because there's not a lot of standup specials being released," she said.

"I wanted this special to come out before the election and HBO Max was like, 'Listen, if you're ready to go film this (during the pandemic), we're right behind you. We'll make this happen with you if we can do this safely.' And we did."

Handler says she sought therapy after constantly feeling outraged about U.S. President Donald Trump, which strained some relationships with family and friends. But while she doesn't shy away from her disdain for the commander in chief, political jokes are a small footnote of the performance. She uses her humour to touch on timely issues like racism, social injustice and white privilege, specifically targeting her heat-seeking messaging.

"I'm talking to white women. That's my biggest fan base," said Handler. "I'm trying to teach white people how to think outside of their own experience because I'm guilty of that. I didn't understand that half of my success is credited to the fact that I'm white and cute. Or I was cute. I'm now transitioning into an elderly woman."

The 45-year-old worked out her set about 20 times in modest clubs in small East Coast cities like Providence, Rhode Island, and New Brunswick, New Jersey, beginning with audiences of about 20 and gradually increasing. She continuously refined her content, making it as fresh as possible. (Her Andrew Cuomo bit was originally about Robert Mueller.) The final product includes an audience of 150, all socially distanced with some wearing masks, visually marking the time period of the production.

"There was a deep sense of accomplishment to be able to pull something like that off, and now we get calls from all the studios asking how we did it because they want to shoot specials," said the former late night host. "I'm like, `I don't know, I just did what I said and got a nasal swab every 20 minutes."'

While jokes about her experience with drugs (legal and illegal), hookups, and growing older flow fast and free, it's in the last 15 minutes of the hourlong special that she becomes soft and vulnerable -- a side she rarely shows -- when talking about the tragic death of her brother, Chet and how it forever fractured her family. The 22-year-old fell off a cliff during a hike in Jackson Hole, Wyoming, when she was 9.

While talking with her therapist, Handler discovered she never really grieved that tragedy, and in many ways, it went on to define much of her life. While the "Life Will Be the Death of Me" author is known for her candour and openness, she no longer wants her brother's tragedy to consume her, thereby giving her fans a different perspective as she narrates her "evolution."

"I've always been very personal. Whatever I put out there is always kind of what I'm going through at the time," said Handler. "I can make things funny. I wanted to have a little bit more heft than what I had previously put out there standup-wise. So it was a challenge."