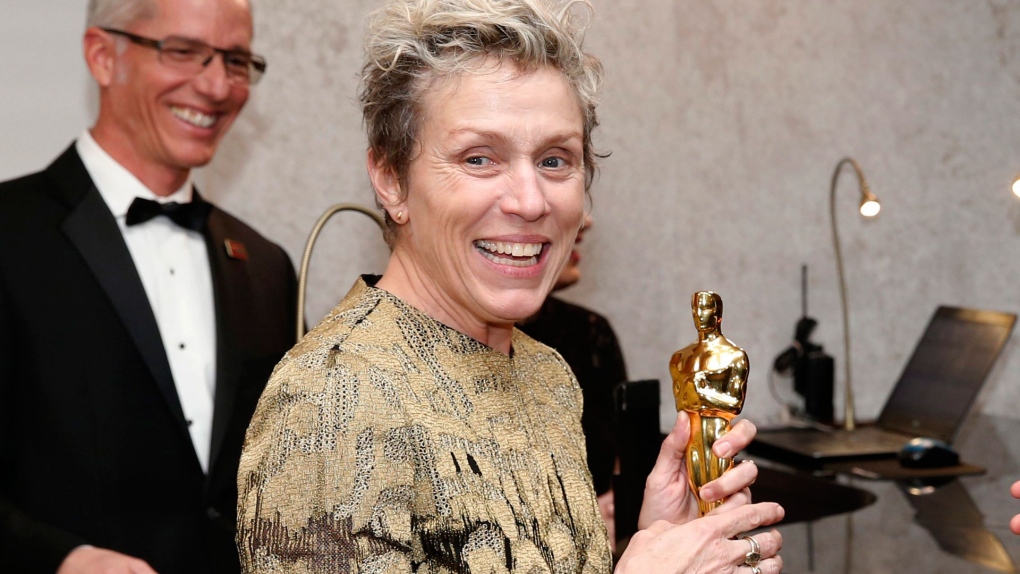 Frances McDormand, winner of the award for best performance by an actress in a leading role for "Three Billboards Outside Ebbing, Missouri", attends the Governors Ball after the Oscars on Sunday, March 4, 2018, at the Dolby Theatre in Los Angeles. (Photo by Eric Jamison/Invision/AP)

LOS ANGELES -- Prosecutors on Tuesday dropped the case against a man charged with stealing Frances McDormand's Oscar statuette from a 2018 Academy Awards after-party.

Terry Bryant's felony grand theft trial was to begin Tuesday, but Los Angeles prosecutors said in court that they were unable to proceed with the case against the 58-year-old. Superior Court Judge Sam Ohta then granted a defence motion to dismiss it.

The district attorney's office gave no explanation for the decision, and Bryant's attorney wasn't immediately available for comment.

McDormand won the award for best actress in "Three Billboards Outside Ebbing, Missouri" on March 4, 2018, and lost the statuette after having it engraved at the Governors Ball, the official Academy Awards after-party, held in the same Hollywood complex as the Dolby Theatre where the show takes place.

Associated Press video shows Bryant, wearing a tuxedo, leaving the party holding an Oscar and saying, ""We did it! We did it."

A film academy worker who was escorting a photographer at the party testified at a preliminary hearing last year that he heard over a walkie-talkie that McDormand's Oscar was missing, and he quickly spotted Bryant, and recovered the statuette.

It was immediately returned to McDormand, who could be seen holding it at the Vanity Fair post-Oscar party hours later.

Bryant's attorney, Daniel Brookman, argued in court last year that Bryant didn't try to hide that he had McDormand's Oscar, and the charge should be dismissed. "There was never any intent to deprive the owner of the property on a permanent basis," Brookman said.

The attorney also said McDormand did not want Bryant to be prosecuted and displayed a police detective's report that said the actress was "not desirous of prosecution."

The case, and the charge of grand theft, showed how murky the value of an Oscar can be. Winners since 1951 have accepted the award on the condition that they or their heirs must offer it back to the Academy of Motion Picture Arts and Sciences for $1 before selling it elsewhere.

A lawyer for the academy argued in Bryant's preliminary hearing that the statuettes cost the organization between $2,300 and $2,500, and said they are probably priceless to most winners.