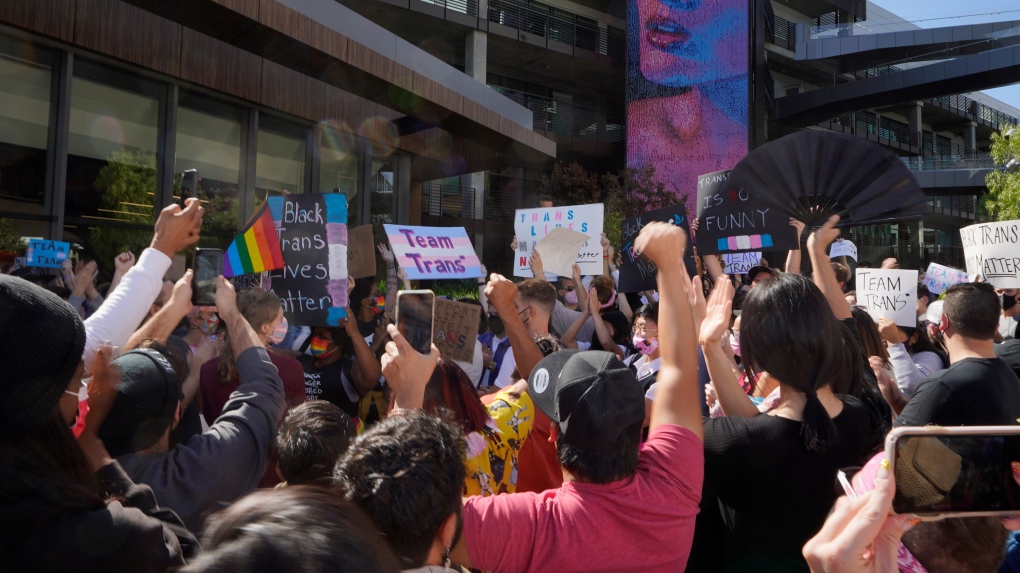 People protest outside the Netflix building on Vine Street in the Hollywood section of Los Angeles, Wednesday, Oct. 20, 2021. Critics and supporters of Dave Chappelle's Netflix special and its anti-transgender comments gathered outside the company's offices Wednesday, with "Trans Lives Matter" and "Free Speech is a Right" among their competing messages. (AP Photo/Damian Dovarganes)

LOS ANGELES -- Netflix employees who walked out Wednesday in protest of Dave Chappelle's special and its anti-transgender comments were joined by allies who chanted "Trans lives matter," getting pushback from counterprotesters who also showed up.

A pre-noon rally at a Netflix office-studio complex drew about 100 people, most on the side of an estimated 30 workers at the streaming giant that joined in afterward. Some were willing to identify themselves as Netflix employees, but all declined to provide their names.

Joey Soloway, creator of the groundbreaking Emmy-winning comedy "Transparent," was among the speakers at the rally.

Chappelle's decision to share "his outrage as comedic humiliation in front of thousands of people, and then broadcasting it to hundreds of millions of people is infinitely amplified gender violence," they said.

"I want trans representation on the Netflix board, this (expletive) week," the writer-director said.

Ashlee Marie Preston, an activist and the event's organizer, addressed the rally and spoke to The Associated Press afterward. She said that calling out Chappelle for his remarks wasn't enough.

"It was important to shift the focus to the people that sign the checks, because Dave Chappelle doesn't sign checks, Netflix does," Preston said. "If we have companies like Netflix who aren't listening to their employees, who are forcing their employees to participate in their own oppression, that's unacceptable."

"We're here to keep people accountable. We're not going anywhere," she said, adding that efforts are underway to start a dialogue with Netflix executives.

There were a few moments of shoving and pushing among the competing demonstrators, but the conflict was mostly limited to a war of words.

Leia Figueroa, a student from Los Angeles, doesn't work at Netflix but said she wanted to back the walkout. While the streaming service offers positive fare for the LGBTQ community, she said, it's having it both ways by also offering a show like Chappelle's that includes disparaging comments about trans women.

If Netflix wants to be "an apolitical platform then they should be that," Figueroa said. "But they're saying things like `Black lives matter' and `We don't stand for transphobia.' If you say things like that, then you have to be vetting all of your content to reflect your values."

As she spoke, a protestor shouted, "We like jokes."

"I like funny jokes, and transphobia is not a joke," Figueroa replied.

Belissa Cohen, a former journalist, said she was on hand to "support Netflix's decision not to pull" the special.

"We want to show that there isn't unanimous support about transgender ideology when it comes to Netflix viewers," Cohen said.

She was among about a dozen people who carried placards reading "Free speech is a right" and "Truth is not transphobic." Opposite them were those carrying signs that included "Black Trans Lives Matter" and "Transphobia is not Funny."

Elliot Page, who stars in Netflix's "The Umbrella Academy" and is transgender, tweeted that he stands with the trans, nonbinary and people of color working at Netflix who are "fighting for more and better trans stories and a more inclusive workplace."

Team Trans*, which identifies itself as supporting "trans people working at Netflix trying to build a better world for our community," posted what it called a list of "asks" being made of Netflix by trans and nonbinary workers and allies at the company.

They are calling on the company to "repair" its relationships with staff and the audience with changes involving the hiring of trans executives and increased spending on trans and nonbinary creators and projects.

"Harm reduction" is another demand, which according to the list includes acknowledgment of what it called Netflix's "responsibility for this harm from transphobic content, and in particular harm to the Black trans community."

In a statement, the media watchdog group GLAAD said it salutes the Netflix's employees, allies and LGBTQ and Black advocates "calling for accountability and change within Netflix and in the entertainment industry as a whole."

The employees who walked out uniformly referred reporters to the GLAAD statement.

Netflix ran into a buzz-saw of criticism not only with the special but in how internal memos responded to employees' concerns, including co-CEO Ted Sarandos' assertion that "content on screen doesn't directly translate to real-world harm."

Sarandos also wrote that Netflix doesn't allow titles that are "designed to incite hate or violence, and we don't believe `The Closer' crosses that line."

In interviews Tuesday, Sarandos said he failed to recognize that "a group of our employees was really hurting," as he told The Wall Street Journal, and that his comment about the effect of TV on viewers was an oversimplification.

Terra Field, who identifies herself on Twitter as a senior software engineer at Netflix and as trans, posted tweets critical of Chappelle's special immediately after it aired and the comments were widely shared.

In her posts, Field said the comic was being criticized not because his remarks are offensive but for the harm they do to the trans community, especially Black women. Field included a list of trans and nonbinary men and women of color who she said had been killed, adding in each case that the victim "is not offended."

This story corrects the spelling of the first name of Belissa Cohen.