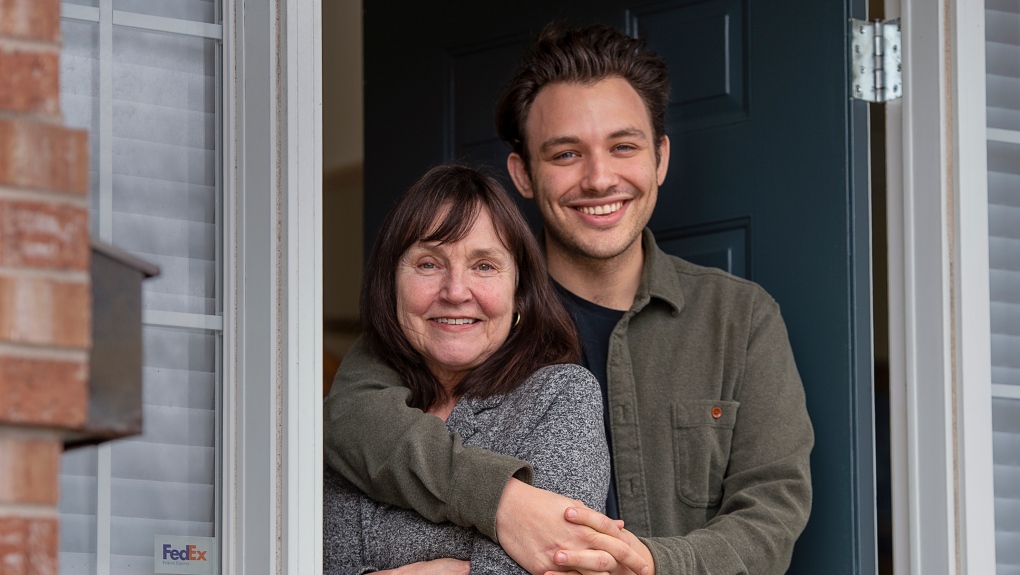 Ben Proudfoot stands with his mother, Madine VanderPlaat, at the family residence in Halifax on Monday, March 15, 2021. Proudfoot has earned an Oscar nomination for co-directing the documentary short "A Concerto is a Conversation” with American composer Kris Bowers. THE CANADIAN PRESS/Andrew Vaughan

The Halifax-raised producer and filmmaker is nominated alongside composer and co-director Kris Bowers for the documentary short "A Concerto Is a Conversation."

He says the nominees are following a "very strict protocol" to attend the ceremony at the Union Station railway hub in Los Angeles.

The show will be held primarily at that venue but some elements will unfold at the Dolby Theatre in Hollywood.

International winners who can't attend will appear by satellite link from their location.

Proudfoot already lives in Los Angeles and therefore doesn't have to quarantine to attend the show, which airs on ABC and CTV.

"It's a sign of hope," he said of the Oscars deciding on a physical bash instead of an all-virtual one.

"I think three, four months ago it may not have been possible -- even six weeks ago. In Los Angeles now, there's open enrollment for most people for vaccines. So I think it's the first inkling of things getting back to normal. Hopefully it's a great and safe evening. I'm sure it will be."

Exactly how the Oscars will unfold remains a mystery, even to Proudfoot.

Producers Jesse Collins, Stacey Sher and Steven Soderbergh have revealed some, but not all, details on what the show will entail.

Proudfoot said as a documentarian, he knows what it's like to make a project in uncertain circumstances and not want to definitively reveal plans before they unfold, since they could easily change.

"I think it's Eisenhower who says 'planning is everything, but plans are worth a damn.' That's definitely true when you're making a documentary, and I'm sure that will be the case for this year's Academy Awards," said Proudfoot.

"You've got to roll with the punches."

The 30-year-old said he's already got his first vaccination and has to take three COVID-19 tests leading up to the show, with the last one being Sunday morning. They have to "submit a very specific plan" about getting tested to a medical team.

"This is probably the first time I've ever gone and done something -- or had a reason to wear even a collared shirt -- in a year, so it's pretty exciting," he said.

Bowers may bring his 92-year-old grandfather, Horace, who is the subject of "A Concerto Is a Conversation."

The moving 13-minute film sees Bowers speaking with his grandfather about the discrimination he faced as he escaped the Jim Crow South, hitchhiked across the United States and started his own dry-cleaning business in Los Angeles in the 1940s.

The story also explores Bowers' feelings of breaking into new spaces as a virtuoso Black jazz pianist and film composer on projects including "Green Book" and the upcoming "Space Jam" sequel.

The documentary has screened as part of the New York Times "Op-Docs" series of short documentaries and at the virtual 2021 Sundance Film Festival.

This is the first Oscar nomination for both Proudfoot and Bowers, who have been friends and colleagues in Hollywood for about five years.

Their Oscars competition includes "Colette" by Anthony Giacchino and Alice Doyard; "Do Not Split" by Anders Hammer and Charlotte Cook; "Hunger Ward" by Skye Fitzgerald and Michael Scheuerman; and "A Love Song for Latasha" by Sophia Nahli Allison and Janice Duncan.

The ceremony will be the first opportunity for Proudfoot and Bowers to meet the other nominees in their category in person, after only connecting through virtual panels.

The virtual world is also where Proudfoot focused much of the Oscar campaign for his film, given the pandemic.

However, he did put up a large vinyl billboard of Bowers' grandfather on the wall outside Breakwater Studios in Los Feliz, Calif., which attracted the attention of Oscar-winning "Green Book" star Mahershala Ali.

Proudfoot said in a moment of sheer coincidence, Ali happened to be walking by when the film team brought Bowers' grandfather to see the billboard and stopped to chat.

It was doubly significant given Bowers did the score for "Green Book" and his piano-playing hands were posing as Ali's in the film.

"He was the only person that walked by in like 40 minutes," Proudfoot said, noting L.A. is a big city and "almost nobody walks around" it.

"It was a very beautiful and fateful moment."

Proudfoot said his mom will be watching the Oscars from Halifax. The ceremony takes place less than a week before the one-year anniversary of his father's death.

"That was a very tough and dark time, right there in the last week of his life," he said. "So I hope wherever he is, he can tune in."

Proudfoot said he feels like they've already won, given how many conversations it has sparked since its nomination.

"Whatever happens on Sunday night, it will have been beyond successful for what we intended to do, which was to create a tribute to Kris's grandfather."

This report by The Canadian Press was first published April 20, 2021.