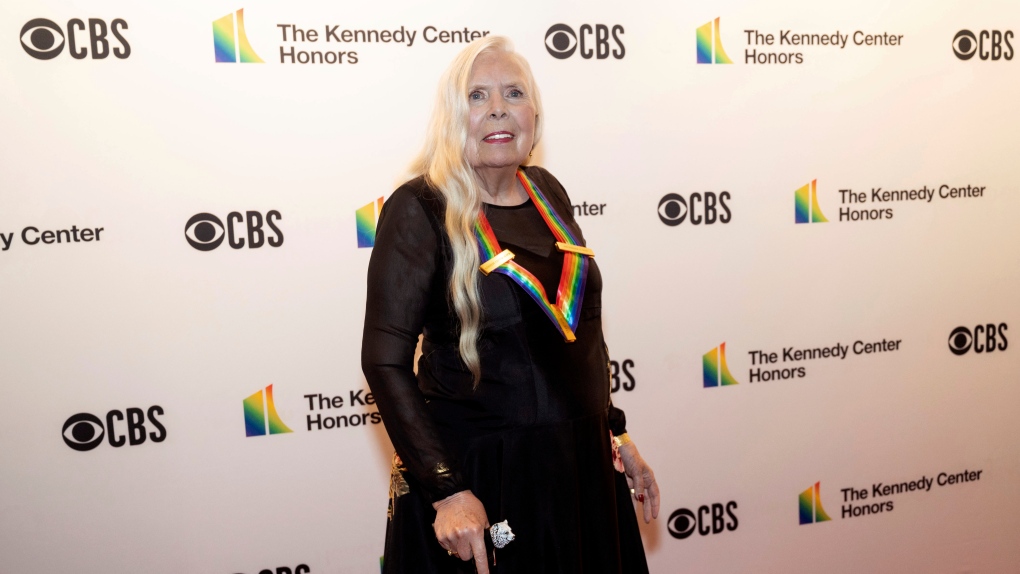 WASHINGTON -- The Kennedy Center Honors returned to tradition this year with a real-life gala Sunday night and the presence of the president for the first time since 2016.

U.S. President Donald Trump and first lady Melania Trump skipped the show the first three years he was in office after several of the artists honoured in 2017, his first year in office, threatened to boycott a White House reception if he participated. Last year, the pandemic forced a delay and major changes to the program.

The Bidens drew a sustained standing ovation when they entered the presidential box at the opera house. Cellist Yo-Yo Ma performed the national anthem and encouraged the audience to sing the final lines together.

The theatre was packed to capacity and there were no social distancing restrictions, but vaccinations and recent negative COVID-19 tests were required for all who attended.

The tributes featured testimonials and performances that were kept secret from the honorees.

Mitchell's tribute featured performances of her songs by Nora Jones, Brandi Carlile, Ellie Goulding and Brittany Howard. Diaz was honoured with a performance from the opera "Carmen" and a song from his two daughters, Katya and Natascia.

Che joked that Biden would be asleep before the end of the show and Poehler poked at the Toronto-born Michaels by proclaiming that Joni Mitchell had been declared "the best Canadian of all time."

Midler received testimonials from close friends Goldie Hawn and Barbara Hershey, and a performance by Tony Award winner Billy Porter of her iconic song, "The Wind Beneath My Wings."

Gordy's career was celebrated with performances of multiple Motown hits by Andra Day and Stevie Wonder and an extended tribute from close friend Smokey Robinson. The event ended with several of the night's performers joining for a performance of Wonder's hit "Higher Ground."

Prior to the Kennedy Center event, Biden revived another tradition that had gone dormant under Trump and held a White House reception for the honorees.

"We welcome everyone back," he told a crowd of about 150 seated in the East Room, decked out with Christmas trees and wreaths. Guests included Vice President Kamala Harris, House Speaker Nancy Pelosi, Caroline Kennedy, Mikhail Baryshnikov, Chita Rivera, Steve Martin and Herbie Hancock.

"Our nation is stronger, more dynamic and more vibrant because of you," Biden told the honorees.

Biden praised the work of the artists, their "sixth sense" that helps them create and move so many people, saying: "I don't think you fully appreciate what you do for so many people."

He spoke of Diaz's "sound of soul," Gordy's creation of "one of the most iconic businesses" in American history with Motown Records.

With Michaels, he joked: "Finally, it's my turn to say something about him," poking fun at Michaels' SNL show, which routinely mocks presidents, including the current commander in chief.

"You make me laugh at myself a lot," Biden said, then went on to say Michaels was auditioning actors right now to play him next on SNL. Biden asked Steve Martin to stand as an example of the type of talent Michaels has cultivated over the past decades.

Martin paused and asked the president, "Do you want me to play you?" The crowd erupted in laughter.

Biden then professed his admiration for both Mitchell and Midler, telling Midler that "people will never forget how you make them feel. That's your gift, it's incredible."

And lastly: "Joni. Your words and melodies touch the deepest parts of our soul," Biden said.

Last year, the pandemic forced organizers to bump the annual December ceremony back to May 2021. Performance tributes to the artists were filmed over several nights and at multiple locations on campus.

This year's main COVID-related modification was shifting the annual Saturday ceremony, where honorees receive their medallions on rainbow-colored ribbons, to the Library of Congress instead of the State Department.

Sunday's ceremony, which will be broadcast Dec. 22 by CBS, is the centrepiece of the Kennedy Center's 50th anniversary of cultural programming. The centre opened in 1971.