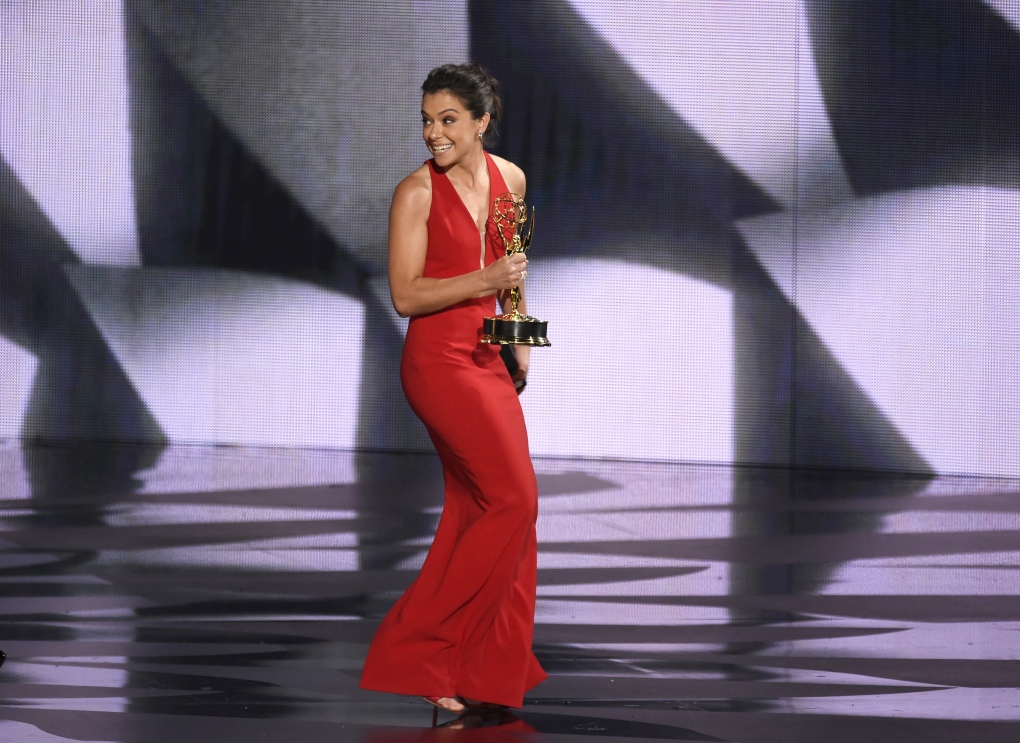 Tatiana Maslany accepts the award for outstanding lead actress in a drama series for “Orphan Black” at the 68th Primetime Emmy Awards on Sunday, Sept. 18, 2016, at the Microsoft Theater in Los Angeles. (Photo by Chris Pizzello/Invision/AP)

TORONTO -- Tatiana Maslany's Canadian peers are celebrating her Emmy win for "Orphan Black" as a victory for the country's acting industry as a whole.

"I think people in our industry, we can be a bit cynical about awards and we can be dismissive about these kinds of things, but there's no doubt that this is huge," "Republic of Doyle" star Allan Hawco said by phone from St. John's on Monday, a day after the Regina native won the Emmy for best actress in a drama.

"'Orphan Black' is an entirely Canadian success story and we should celebrate that," said Downey.

"When people say we need to import talent to succeed, Tatiana's win is proof that the talent is here. We are competing in international arenas and being recognized worldwide."

It was the second year in a row that Maslany was nominated for an Emmy for her multiple roles in the sci-fi thriller, about different sets of clones and the shadowy organization behind them.

According to Space, which airs the Toronto-shot "Orphan Black" in Canada, Maslany's win represents the first time a Canadian actor on a Canadian show has received an Emmy for acting in a dramatic series.

The 30-year-old had stiff competition in her category: Taraji P. Henson for "Empire," Claire Danes for "Homeland," Robin Wright for "House of Cards," Viola Davis for "How to Get Away with Murder," and Keri Russell for "The Americans."

"I feel so lucky to be on a show that puts women at the centre," Maslany said during her acceptance speech, after receiving her trophy from fellow Canadian Kiefer Sutherland.

"Orphan Black" co-creator John Fawcett wasn't at the show because he's preparing to direct the first two episodes of the series' upcoming final season. But he spoke with "Orphan Black" cast member Kristian Bruun who was there.

"Kristian basically told me when Tat won, they all went nuts in the audience, up on their feet and cheering like a bunch of out-of-towners and kind of made a big scene at the Emmys," Fawcett said.

"I've had a lot of belief in her from the beginning and I'm really, really proud of her, I'm really excited for her and for where this sends her career next," added Fawcett.

"We're a smaller show and it's really incredible it's happened at the end of season 4. I just see it as this really amazing thing that is going to bring hopefully a lot of new viewers to our final season and discovering 'Orphan Black' before 'Orphan Black' is over."

Twitter was teeming with laudatory messages for Maslany, who was also trending on the social media network on Monday morning. Everyone from famed "Hamilton" playwright Lin-Manuel Miranda to Oscar winner Brie Larson and pop duo Tegan and Sara tweeted congratulations.

"Tatiana was also in a film that was selected in Cannes this year, 'Two Lovers and a Bear,' and all these elements are just an indication of what we know at Telefilm: that we have a lot of talented people, a lot of talented writers, directors and that when they work together, the success is there and that's showcasing that."

Hawco said "it certainly isn't bad" for Canadian actors that Maslany "is taking the world by storm," but added that "her work speaks for itself."

"It truly is a testament to the work that they do on that show and its originality, the concept, the fact that she's a female actor who has full control of it in terms of the characters that are on the series,' he said.

"She has a unique opportunity, but she's got the stuff to make it work. It's not something everybody can do, what she's doing on that show."