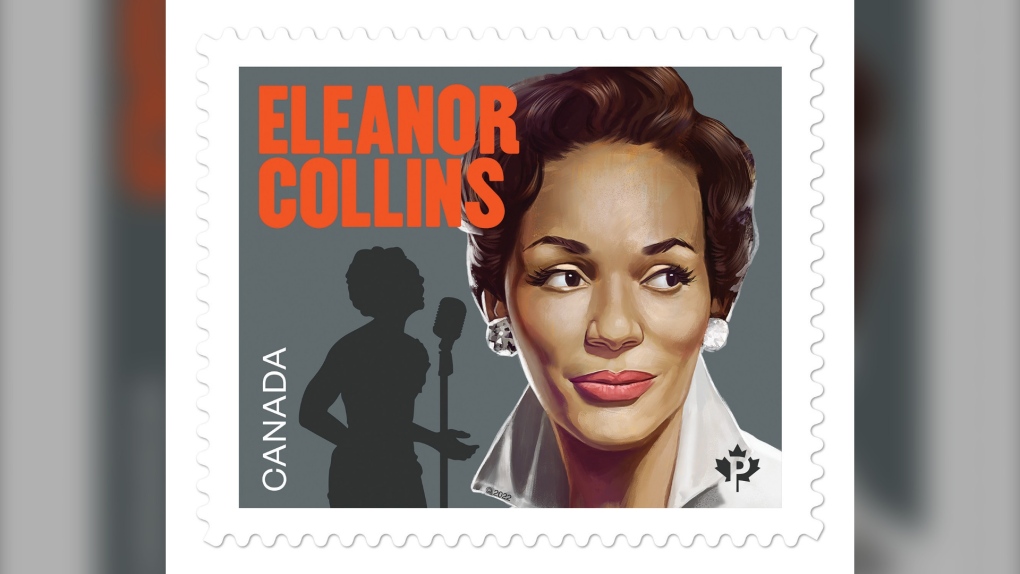 The stamp depicting jazz singer Eleanor Collins was unveiled at a virtual ceremony on Friday, paying tribute to her life and legacy ahead of Black History Month. (Canada Post)

The stamp depicting the "Canadian First Lady of Jazz" was unveiled at a virtual ceremony on Friday, paying tribute to her life and legacy ahead of Black History Month.

"How do I feel? I feel wonderful and honoured," Collins said during the ceremony. "To really have someone affirm your work and life on a postage stamp, that is something. There's only one word for that. That is surreal."

The 102-year-old jazz legend has already been awarded an Order of Canada and has a star on B.C.'s Entertainment Hall of Fame.

"You know, at 102 years old, one doesn't expect to be remembered. But I am grateful," she said.

Born in Edmonton to parents of African American and Indigenous heritage, Collins got her start as a singer after winning a local talent show at the age of 15. In the late 1930s, she relocated to British Columbia and immersed herself into the jazz scene.

Throughout her career, Collins has been performing on TV and radio, working with everyone from Montreal jazz pianist Oscar Peterson to American jazz trumpeter Dizzy Gillespie.

Despite opportunities to take her talents to the U.S., Collins kept her career in Canada. In 1955, she became the first Black woman to headline a TV show in North America, starring in "The Eleanor Show."

Jazz musician Alan Matheson has long admired Collins and even had the opportunity to perform with her at a concert in the 1980s.

"The first thing that comes to mind is this beautiful vocal sound that she has but also her remarkable versatility and her sparkle as a performer," he told CTV News.

"Didn't matter if she was singing Broadway show tunes or folk music or jazz standards. She always sounded 100 per cent like herself."

Singer-songwriter Krystle Dos Santos calls her an inspiration and describes her voice as "an absolute classic voice for jazz."

"To me, she is an absolute icon, and she has broken so much ground for Black female Canadian musicians and Black females just in general in this country," she told CTV News.

But despite her success, Collins faced discrimination both professionally and personally. In the 1940s, when Collins moved to an all-white neighbourhood in Burnaby, B.C. with her husband and kids, neighbours started an unsuccessful petition to prevent her family from moving in.

"When you're being asked to move out of your neighbourhood, you've got to have a whole different sort of resolve to your character to be able to live through moments like that," Dos Santos said.

"She has strength. She has talent. She has perseverance. She has class."

Ukrainian President Volodymyr Zelenskyy called for 'maximum' sanctions against Russia during a virtual speech Monday to corporate executives, government officials and other elites on the first day of the World Economic Economic gathering in Davos.