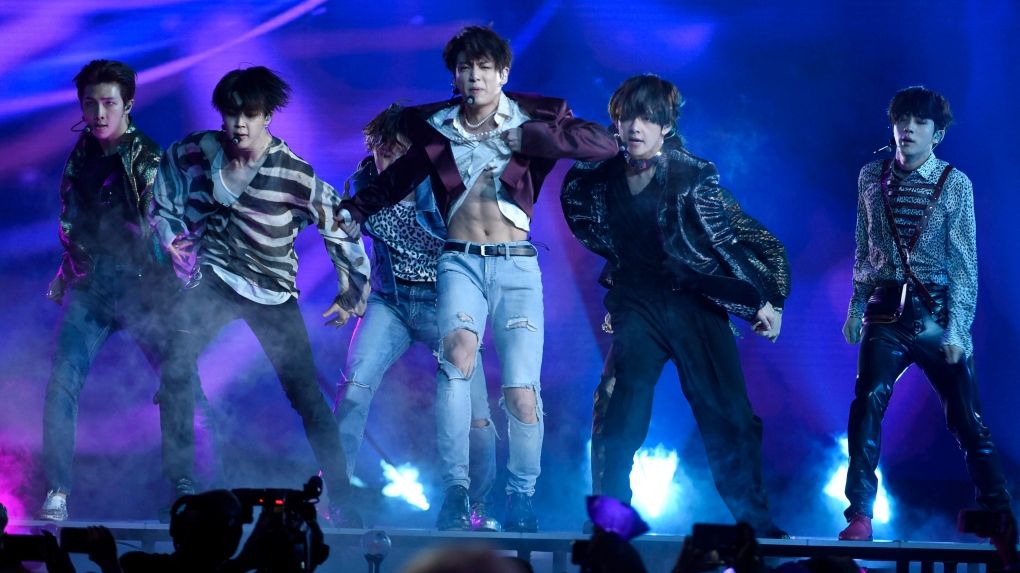 BTS performs "Fake Love" at the Billboard Music Awards at the MGM Grand Garden Arena on Sunday, May 20, 2018, in Las Vegas. (Photo by Chris Pizzello/Invision/AP)

SEOUL, Korea, Republic Of -- The agency for K-pop superstars BTS apologized Wednesday for members wearing a T-shirt depicting the explosion of an atomic bomb and a hat with a Nazi emblem.

Japanese TV broadcasters recently cancelled planned appearances in that country after images went viral of the musician wearing the shirt. The South Korean boy band ran into more troubles after news broke out that another member wore a hat featuring a Nazi symbol in a magazine photo book and band members flew flags with what appeared to be the Nazi swastika during a concert in the past.

"We would like to again offer our sincerest apologies to anyone who has suffered pain, distress and discomfort due to our shortcomings and oversight in ensuring that these matters receive our most careful attention," the band's agency, the Big Hit Entertainment, said in a statement.

The T-shirt portrayed an atomic bombing juxtaposed with the celebration of Korea's 1945 liberation from Japan at the end of the World War II. The United States dropped atomic bombs on the Japanese cities of Hiroshima and Nagasaki before Tokyo's surrender.

Before its division into North and South Korea after the liberation, the Korean Peninsula was colonized by Japan from 1910-1945. Many in both Koreas still harbour strong resentment against the Japanese colonial masters. But in South Korea, it's extremely rare for anyone to publicly celebrate or mock the atomic bombings.

It doesn't appear the T-shirt controversy is seriously affecting the band's huge popularity in Japan, with 50,000 people reportedly filling up the Tokyo Dome Wednesday evening to watch them perform.

The BTS agency said the A-bomb shirt's wearing was "in no way intentional" and that it wasn't designed to "injure or make light of those affected by the use of atomic weapons." It said it still apologizes for "failing to take the precautions that could have prevented the wearing of such clothing by our artist."

Regarding the hat furor, it said all apparel and accessories used for the photo book were provided by a media company involved in its publication. It said the flags in question were aimed at symbolizing South Korea's restrictively uniform and authoritarian educational systems, not the Nazism.

"We will carefully examine and review not only these issues but all activities involving Big Hit and our artists based on a firm understanding of diverse social, historical and cultural considerations to ensure that we never cause any injury, pain or distress to anyone," the agency statement said.

The seven-member band, which has worldwide following, is the first South Korean artists in May to top the Billboard 200 albums chart with "Love Yourself: Tear." The band began its Japan tour earlier this week.

South Korean K-pop and movie stars are extremely popular in Japan and other Asian countries.