Bryce Dallas Howard says N. Zealand like 'some other planet' 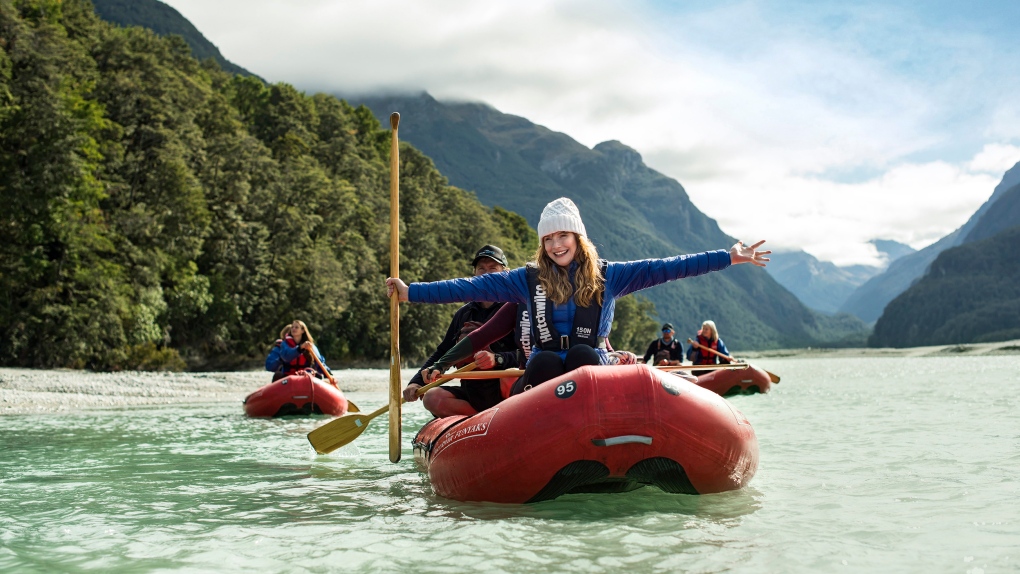 In this April 18, 2017, photo supplied by the Tourism New Zealand, United States actress Bryce Dallas Howard reacts as she enjoys a kayak trip down the Dart River in the Mt. Aspiring National Park, in New Zealand. (Tourism New Zealand via AP)

WELLINGTON, New Zealand -- Actress Bryce Dallas Howard says her enthusiasm for New Zealand hasn't dimmed since she first visited at age 5 and was so stunned by the scenery she felt like she'd arrived on another planet.

Howard this week begins a campaign to promote the South Pacific nation as a tourist destination to Americans and Canadians. Howard first visited New Zealand when her father Ron Howard was directing the 1988 movie "Willow."

She said her home city of Los Angeles was smog-ridden at the time.

"We arrived at night, in Queenstown, and I'll never forget this: I woke up, and there were these huge, huge windows in the house where we were staying. I looked out, and it was as if I'd stepped into a portal, or been transported to some other planet. It was like a Utopian version of Earth."

She said she'd never seen such stunning mountains and fields, oceans and forests, and the experience opened her up to a world beyond her family's life in the suburb of Encino.

Howard, who starred in "The Help" and "Jurassic World," spent four or five months in New Zealand more recently while working on the fantasy-adventure "Pete's Dragon," released last year.

She told The Associated Press in a recent interview that filming the movie was a magical time for her because so much of it was shot outdoors. She visited a number of towns and saw everything from farm shows to ancient kauri trees.

Tourism is growing in New Zealand, and last year overtook dairy as the nation's top earner of overseas dollars. About 3.6 million people visited in the year ending in May, with the most tourists coming from Australia, followed by China and then the U.S.

The surge has placed a strain on some services and towns, and upset some residents. In one recent survey, 21 per cent of New Zealanders said they thought there were too many tourists, up from 13 per cent in 2015.

Tourism New Zealand Chief Executive Stephen England-Hall said there is still room for the industry to grow, especially if tourists can be encouraged to visit different places and come at different times of the year. He said Howard was a natural fit to promote New Zealand because of her genuine love for the country.

Howard said two of her favourite places were the capital city, Wellington, because of its vibrant markets and community of hipsters and entrepreneurs; and the relaxed beach town Mount Maunganui.

She said New Zealand was relatively safe, not only from crime but also because it lacked snakes or other dangerous animals. The travel time and jetlag from the U.S. aren't as bad as many imagine, she added.

"Globally, we're going through this intense time, with high levels of anxiety," she said. "It's been proven again and again that what's most valuable, how you find happiness, are experiences rather than things."