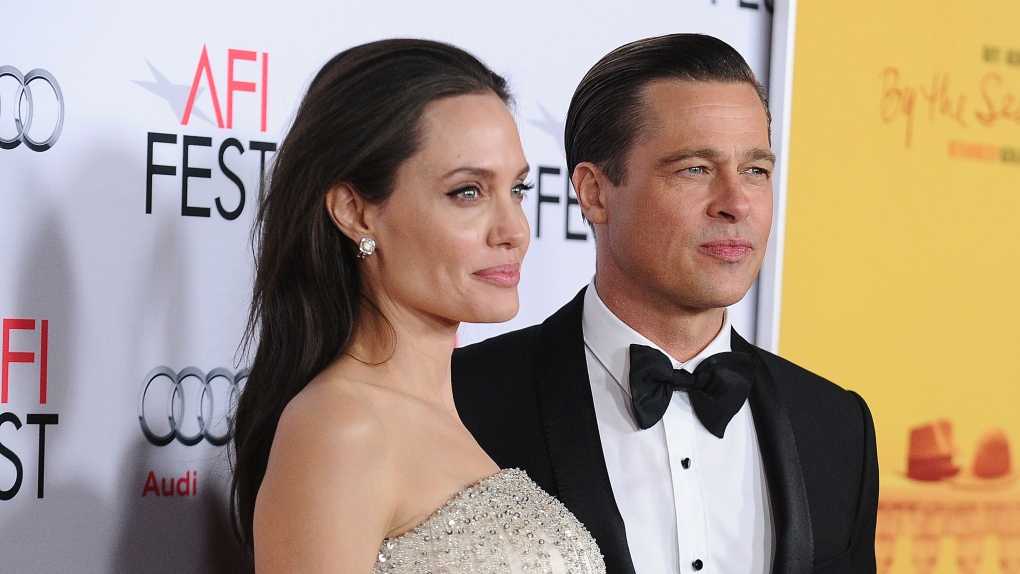 Angelina Jolie, left, accused Brad Pitt of injuring her and verbally abusing their children during a heated encounter aboard a private jet in 2016, according to an FBI report. Jolie and Pitt are pictured here in 2015. (Jason LaVeris/FilmMagic/Getty Images)

Angelina Jolie accused Brad Pitt of injuring her and verbally abusing their children during a heated encounter aboard a private jet in 2016, according to an FBI report provided to CNN by a source.

In the heavily redacted report, which was released to both parties as a result of a freedom of information of act request, the actress told agents that while traveling back to California with Pitt and their six children following a two-week vacation, her then husband had been drinking when he told her to accompany him to the back of the plane after he had a​ tense interaction with one of their children.

Pitt's name is redacted in the report, but it refers to her husband multiple times and he was married to Jolie at the time of the alleged incident.

Once there, she said, they were in a restroom which had a privacy door that did not allow their children to see them as she alleged Pitt "grabbed her by her head," "grabbed her by the shoulders," shook her, pushed her into the bathroom wall and was yelling various things at her, including "'You're f**king up this family,'" according to the report.

Pitt was not arrested or charged in connection with the incident after the FBI completed an investigation in 2016.

"In response to allegations made following a flight within the special aircraft jurisdiction of the United States which landed in Los Angeles carrying Mr. Brad Pitt and his children, the FBI has conducted a review of the circumstances and will not pursue further investigation. No charges have been filed in this matter," FBI spokeswoman Laura Eimiller said in a statement to CNN at the time.

CNN has reached out to representatives for both Pitt and Jolie for comment.

"All parties have had this information for nearly six years and was used in previous legal proceedings. There is nothing new here and serves no purpose other than being a media stunt meant to inflict pain," a source close to Pitt said of the report coming to light now.

According to the FBI report, Jolie told investigators that two of their children (whose names are not evident in the redacted report, but were noted to be minors at the time) "were outside the door crying and asked 'Are you ok Mommy?'"

According to Jolie, that prompted one of their children to respond "'It's not her, it's you, you p***k,'" which she said enraged Pitt and she alleged that she saw him run toward one of the children "like he was going to attack," at which point she said she got Pitt into a choke hold that he tried to break by throwing himself back, pushing her into the chairs behind them, it says in the report.

Jolie alleged in the report that she suffered injuries to her back and elbow as a result and shared a photo of the injury to her elbow with the FBI.

Black and white photocopies of the photos are included in the report, as well as handwritten pages provided by Jolie, purportedly from her children, containing descriptions of the alleged incident. The handwritten pages are substantially redacted.

Jolie also said in the report that Pitt continued to drink during the two-legged trip, later pouring beer on her. After they arrived in Los Angeles, the pair had a physical altercation and she said Pitt prevented her and the children from leaving the plane for 20 minutes.

In addition to her back and elbow, the report states Jolie said she also suffered "a rug burn type wound" on her left hand. A photo of the wound is included in the redacted report. She was asked about a reported scratch on Pitt, which Jolie said in the report could have been caused by her though she believed she had him more in a choke hold.

According to the report, after reviewing a probable cause statement related to the incident, a representative from the US Attorney's Office "discussed the merits of this investigation with the [FBI] case agent."

"It was agreed by all parties that criminal charges in this case would not be pursued due to several factors," the report reads.

CNN has reached out to the US Attorney's Office for comment.

When reached by CNN via email, a spokesperson for the FBI responded, "No charges were filed in connection with this matter and it would be inappropriate to comment further."

Jolie filed for divorce soon after the incident and while a dissolution of their marriage was granted in 2019, their legal battle over property and custody of their minor children has continued over the years with a California appeals court ruling last year that a retired judge who had been hired to arbitrate the custody dispute should be disqualified because of a possible conflict of interest.

In 2020, Jolie told Vogue India she split with Pitt for the sake of her children.

"I separated for the well being of my family," she said. "It was the right decision. I continue to focus on their healing."

Pitt told GQ in 2017 he had quit drinking after having been "boozing" too much that past year.

In a June 2022 interview with British GQ, he talked about finding more peace recently.

"I always felt very alone in my life," he told the publication "alone growing up as a kid, alone even out here, and it's really not till recently that I have had a greater embrace of my friends and family."