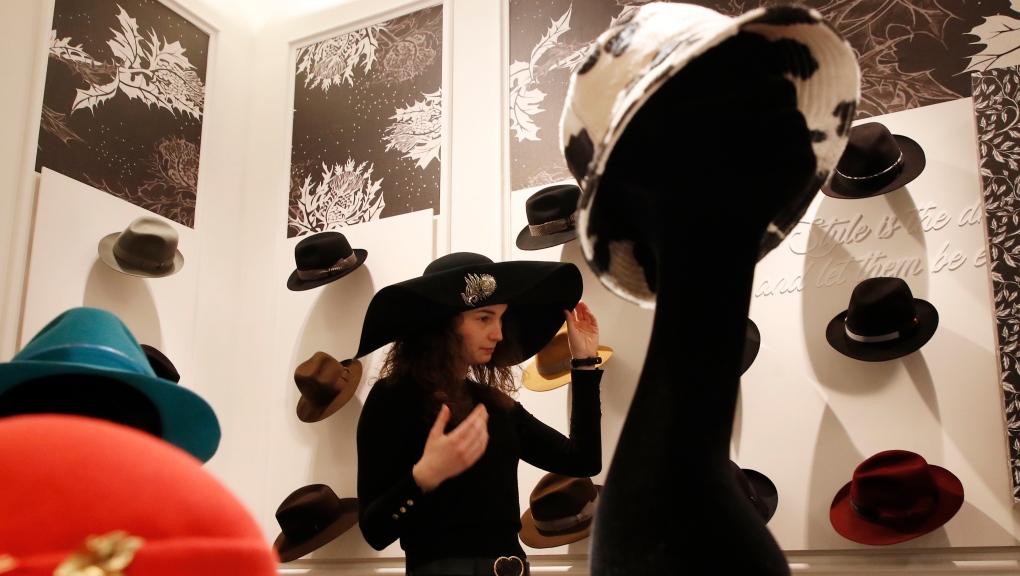 MILAN, ITALY -- The fedora Humphrey Bogart wore in "Casablanca" may have secured Borsalino's place in fashion and cinematic history, but it will be something like the cow-print bucket hat that will help ensure its future.

The storied Italian hatmaker still makes its felt hats by hand in a Piedmont region factory, using the same artisanal techniques from when the company was founded in 1857 and some of founder Giuseppe Borsalino's original machinery. It is updating its offerings for next fall and winter, with a focus on customization and youth-trends.

The new collection displayed during Milan Fashion Week takes inspiration from the Arts & Crafts design movement in mid-19th century Britain. Hat pins with leaf and floral motifs allow women to uniquely shape the hats, to take up an oversized brim, say, or to create an elegant fold in the crown.

A leopard fedora can be paired with a long chain, to wear over the shoulder when going in and out of shops, while a clochard has an optional leather corset.

"You cannot change a hat so much," Giacomo Santucci, Borsalino's creative curator, said. "You can change the attitude of the hat."

The company, which relaunched three years ago, was in the process of scaling up production from 150,000 custom hats a year to a goal of half a million when the pandemic hit.

"To be honest, it is such a small company, in a way it is very simple to react," said Santucci, who is also the current president of the Italian Chamber of Buyers. "The smaller you are, the more reactive and prompt."

Beyond new styles, that means getting people talking. Santucci, who was Gucci CEO during the Tom Ford era, created a new film for this season, featuring Milanese women who chose hats to match their styles, striding through the centre of the city. Last season's film featured dancers from Alessandria, site of the original Borsalino factory, dancing through the factory floor.

"My strong belief is that fashion is becoming more and more a discussion," Santucci said.

New social media platforms like Clubhouse are giving people the chance to create a limited and select group to discuss relevant topics, which Santucci said has been key during the isolation imposed by the pandemic.

He also has pursued collaborations with ready-to-wear brands, including Borsalino X Valentino.

"Brands are changing. It is getting closer to entertainment, to give people the chance to engage with the brand, to understand it better. Not only to understand what was done in the past, but to really interact and to have the chance to be part of the same community," Santucci said.