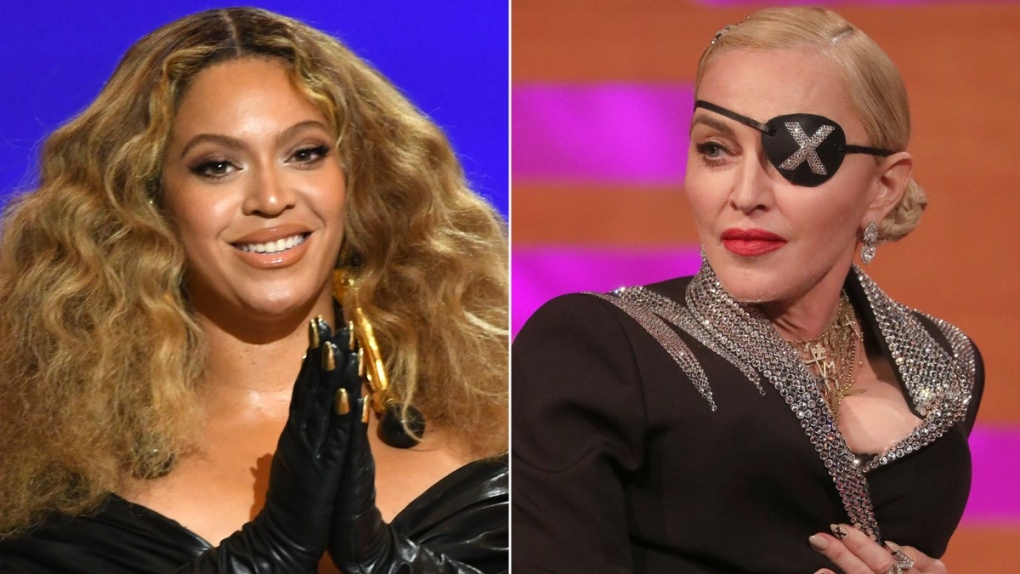 Beyoncé paid homage to Madonna in a note thanking her for collaborating on a new "Break My Soul" remix, in which "Vogue" was woven into Bey's song. (Getty Images)

For lending the iconic melody from "Vogue" to Beyoncé's new "Break My Soul" remix, Madonna (AKA Madge, the Queen of Pop, Madame X, etc.) received a new title -- "masterpiece genius," bestowed upon her by Bey herself.

Beyoncé sent Madonna a reverent note of gratitude -- plus a striking bouquet -- days after the release of their collaboration on a new version of "Break My Soul," which weaves in "Vogue." At the time of its release in 1990, "Vogue" marked one of the first mainstream pop culture works to spotlight elements from the queer, Black and Latino-led ballroom scene.

"Thank you, Queen," Beyoncé's note read, according to an Instagram story Madonna shared on Tuesday. "I'm so grateful for you. You have opened so many doors for so many women. You are masterpiece genius." ("Masterpiece genius" is a lyric from the third track of "Renaissance," the immediately beloved "Alien Superstar.")

"Thank you for allowing me to sing in your song and thank you for naming the remix!!!!" Beyoncé wrote, referencing the official name of their "Break My Soul" collaboration -- "The Queens Remix."

In their remix, Bey shouts out artists who inspire her, including "Queen Mother Madonna" and her sister, Solange, plus Lizzo, Grace Jones (twice!), Aaliyah, Aretha Franklin and her fellow "Destiny's Child" member and best friend Kelly Rowland. Beyoncé also nods to some of the legendary houses who shaped ballroom culture, including the House of LaBeija and House of Xtravaganza, whose members helped coin much of the lingo Beyoncé dispenses across the album.

A $1 billion class action lawsuit has been filed in the Court of King’s Bench against the Government of Manitoba and the Attorney General of Canada related to the child welfare system in Manitoba.