Batman might be used to hiding in the shadows when he's in Gotham City, but he couldn't hide from Torontonians with their smartphones on Monday.

The new-look Batmobile hit the streets of Toronto overnight to film a car chase with the Joker for the upcoming film "Suicide Squad," in a scene that drew a considerable crowd downtown. 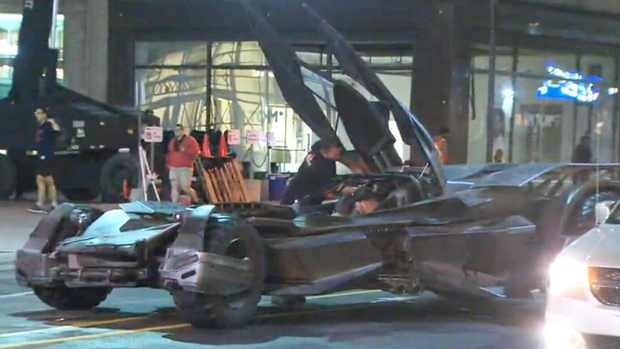 Dozens of images and videos flooded social media late Monday, as people lined the sidewalks to watch the Batmobile chase the Joker's bright purple sports car up Yonge Street for the shoot.

The new Batmobile looks and sounds like an armoured Formula One race car, with back wheels so wide, they span a lane and a half.

"Suicide Squad" is a DC Comics film featuring a team of jailed supervillains forced to go on high-risk missions for the American government. The film stars Will Smith as Deadshot, Jared Leto as the Joker and Margot Robbie as Harley Quinn.

It's also rumoured to feature Ben Affleck as Batman – a rumour all but confirmed by the presence of the Batmobile in Toronto for the shoot. Affleck was also photographed in Toronto last month, and a pointy-eared figure hidden under a tarp was spotted on the "Suicide Squad" set around the same time.

Ben Affleck has been spotted on the #SuicideSquad set trying to hide the #Batman costume. Nice booties! pic.twitter.com/gxvc1SKN2u

Affleck is already slated to play Batman in the Zach Snyder-directed "Batman v. Superman: Dawn of Justice," which is due out in March next year. "Suicide Squad" director David Ayer has not confirmed that Affleck will be in his film, but if he's keeping that a surprise, Toronto smartphone users have already spoiled it.

There's been a near-constant stream of set photos leaked from the "Suicide Squad" shoot, which has occasionally shut down sections of the city's downtown core over the last few months. The film staged a plane crash on Yonge Street earlier this month, and Leto and Robbie were filmed shooting a tense fight scene just last week. Photos are also circulating online of Smith's Deadshot, Robbie's Harley and several other villains filming a chaotic fight scene downtown.