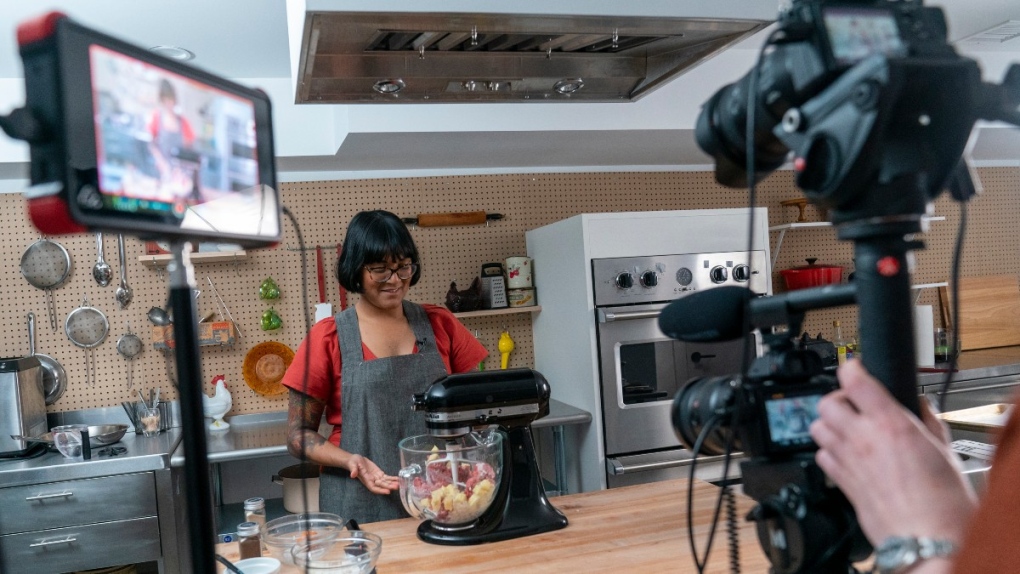 NEW YORK -- Mac and cheese, 18th-century style. A seven-course meal using only ingredients from a convenience store. A meal that is literally on fire.

Four episodes into her new YouTube show, "Stump Sohla," part of the expanding "Babish Culinary Universe" channel, Sohla El-Waylly has yet to be stumped by a food challenge.

El-Waylly became a familiar face on YouTube as a standout on Bon Appetit's test kitchen channel. But during the nationwide racial reckoning following the police killing of George Floyd, she was among members of the test kitchen who accused the channel's owner, Conde Nast, of discriminatory compensation and other practices. A Conde Nast representative said race wasn't a factor in setting pay.

Her new show is her own, pushing her to deploy her talent, charm and encyclopedic culinary chops to solve challenges.

"My creativity comes from being put in difficult situations," El-Waylly said during a break in shooting an upcoming episode.

The series riffs on a game show, with a spinning wheel that determines which challenge El-Waylly will take on.

In the second episode, in which she relies only on items purchased at a bodega to create a tasting menu, El-Waylly pours hot water over potato chips to rinse off the fat and make a mashed potato-esque puree. She expects it to "be gross." But as she tastes it, a look of sheer satisfaction comes over her face.

Leaving Bon Appetit for an independent YouTube channel could be considered risky, but the payoffs were noticeable almost immediately. The three months it took to create the whole "Stump Sohla" series was about how long it would take to produce one Bon Appetit video, El-Waylly said, given the hurdles of working at a large company with corporate red tape.

Now, she says, "you can just have an idea and go with it while you're still excited."

Her show is the first addition into the expanding "Babish Culinary Universe", a rebrand of Andrew Rea's popular "Binging With Babish" channel. Just weeks after it started, "Stump Sohla" is driving an average of 2.3 million views per post, and added 30,000 new subscribers to the channel in one day, according to YouTube figures.

"Binging With Babish" started in February 2006 as a cooking program that recreates meals from pop culture and TV shows (the name pays homage to a "West Wing" character). Over 14 years, Rea had a slew of viral hits. The Moist Maker, a Thanksgiving leftover sandwich from "Friends," put him on the map, Rea said. The simple Italian pasta dish featured in "Chef," more than 8.6 million views. And the titular dish from "Ratatouille" is his most-viewed video, with more than 24.4 million watches.

"We're doing everything we can to not let the pandemic interrupt our growth," Rea said. "Because I think now more than ever, not only are people turning to YouTube for entertainment, but also just for escapism."

Since the pandemic stopped life in its tracks in mid-March, the average daily views of videos with "cook with me" in the title have increased by over 100%, according to data provided by YouTube.

Earnest Pettie, who leads YouTube's global trends research, said that food trends at the beginning of the pandemic included sourdough bread, then Dalgona coffee, Basque burnt cheesecake and, now, "island" cakes. The recipe for a successful YouTube channel, he said, is including people in a social conversation that teaches them something new or helps them feel better about themselves.

But the most important ingredient is authenticity -- an "it" factor that can't be manufactured, Rea said. It's the difference, he said, between YouTube content and a television cooking show where all you see is "this beautiful, perfect person making beautiful, perfect food on their first try."

And that was what Rea said drove him to direct message El-Waylly on Instagram in June, and ultimately decide she was the perfect person to help him expand his digital food network.

"We've been waiting for the opportunity to find somebody new for the channel that was a great fit for our culture and philosophy of being goofballs and having fun while being entertaining and informative, and she embodies that and so much more," Rea said.

After leaving Bon Appetit, El-Waylly initially announced she would still create digital and magazine content for the brand. But last week she said on Instagram that she ended her "relationship" with the brand. Several of her fellow test kitchen colleagues have also left.

The highly publicized internal turmoil at Bon Appetit sent the brand into a tailspin that included a four-month absence from its YouTube channel, which it started adding new content to this month.

When asked if El-Waylly's exit from Bon Appetit and the void left by its hiatus was an impetus for Rea's expansion of his channel, he said no, adding "that's not really how YouTube works."

Rea has long had a devoted following on his channel, which YouTube data shows is among the top food programs on the platform, with more than 8 million subscribers and over 1.5 billion channel views.

He has been building out the channel's offerings for years, adding a beginner-friendly show called "Basics With Babish" in 2017 and expanding into lifestyle content two years later with "Being With Babish." It features Rea travelling across the country connecting with fans.

That evolution, and frequent crossover episodes with other YouTube personalities and celebrities, gave way to Babish Culinary Universe -- a name Rea says was suggested by fans as a nod to the Marvel Cinematic Universe.

A crossover El-Waylly wants to make happen? A collaboration with Sean Evans' popular "Hot Ones" series, where guests eat increasingly spicy chicken wings while being interviewed -- but she wants to make all the hot sauces herself.

One of the lessons Rea says he has learned over his YouTube career is to always film every time you cook. He noted that the audience really responds to his process -- namely, his mistakes.

"I want people to see it's OK to make mistakes because they're learning opportunities," he said. "Everything that I am and everything that I have been able to do is the product of me being able to learn from and grow from my mistakes."

That is what he hopes will be part of his legacy -- and something he wants to focus on in a memoir he's thinking about writing.