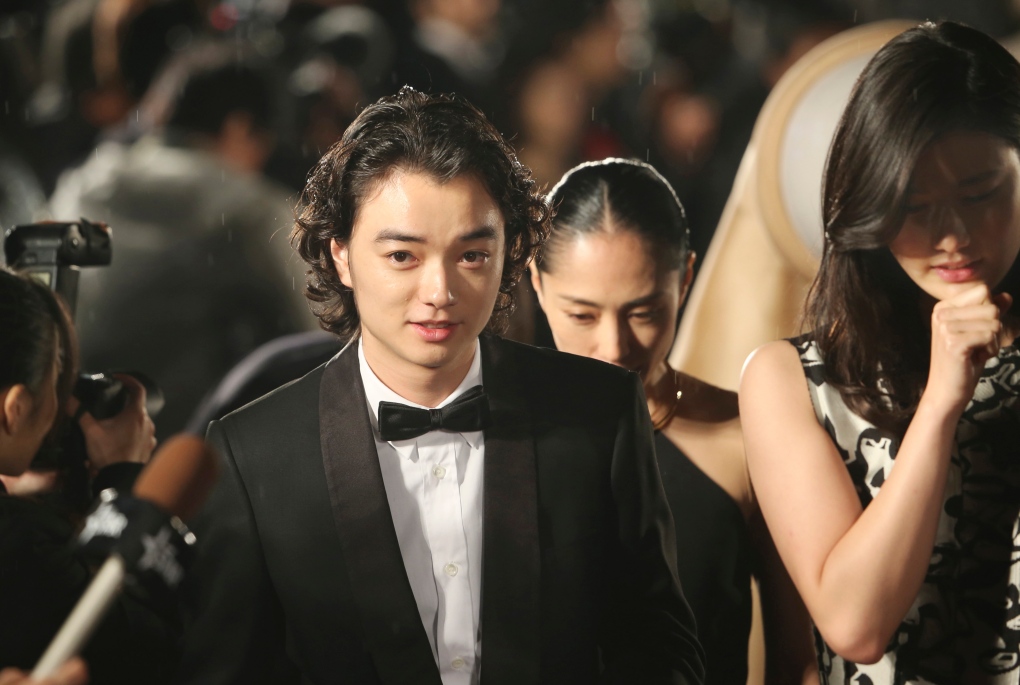 In this Thursday, Oct. 23, 2014 photo, Japanese actor Shota Sometani walks on the red carpet during the opening ceremony of the 27th Tokyo International Film Festival in Tokyo. (AP Photo/Koji Sasahara)

TOKYO -- In person, Shota Sometani is still and quiet, speaking in a soft, almost lackadaisical voice. His ideal acting role, he says, would be one in which he couldn't rely on facial expressions, such as a character wearing a mask.

The 22-year-old, who has acted since age 7, has earned a reputation for serious acting in dozens of ambitious Japanese movies. And his gentle air is not superficial technique, but the drive to be a true actor.

In a recent interview with The Associated Press, Sometani made clear he was reaching for something deeper.

He demonstrated his ability to express devastating angst in his heart-wrenching portrayal of an abused youngster in Japanese auteur Sion Sono's "Himizu." Sometani won the Marcello Mastorianni Award for best emerging actor at the 2011 Venice Film Festival with his co-star for that work.

"I want to do the kind of acting that's convincing and complete, just by standing there, even without any words," he said.

"It's a mystery. I don't have a method, even in myself. You have to believe in the role, the blood that's flowing in the character, the basics."

Although he has not gotten any Hollywood offers yet, Sometani says he is ready, studying English so he feels comfortable acting in that language. He has also directed short films of his own.

Sometani is on track to be possibly the next global star from Japan, following in the footsteps of Toshiro Mifune of Akira Kurosawa's "Seven Samurai" and, more recently, Ken Watanabe, who appeared in "Inception" and "Godzilla."

He is in the spotlight for this year's Tokyo Film Festival, starring in Thursday's closing film "Parasyte," a science-fiction thriller directed by Takashi Yamazaki.

Based on a manga-comic, the film has characters that are computer graphics, forcing Sometani to try to blow life into them through his acting.

The work juxtaposes the horror of body-snatching wormlike aliens with everyday contemporary life, the blood and violence eerily contained but frighteningly real in the small dingy bedrooms, kitchens and classrooms.

Sometani believes the claustrophobia and insularity of the Japanese lifestyle make for unique filmmaking. The chaos and weirdness that surround his character in "Parasyte" meant he was called upon to show the purity that was inside the young man he played, he said.

In the brutal but beautifully shot "Himizu," set in a desolate Japan after the 2011 Fukushima quake, tsunami and nuclear triple disaster, the child-hero, whom Sometani portrays with both fragility and a frenzy, endures violence, loneliness and disgraceful parenting.

We don't expect him to survive.

But when he not only pronounces the guilt of the adults who went before him but also vows to do better and become a respectable adult, it is a victorious and moving cinematic moment.

"Shota Sometani, a gifted young actor, has a screen presence in 'Himizu' that is reminiscent of the American actor James Dean's performance in the classic film 'East of Eden.' When Shota is on screen you can see the pain behind his eyes," said American director Christopher Ward, who teaches filmmaking at New York Film Academy.

"He has a bright future and not just in Japan," Ward said.

Sometani, whose favourite actor is the late Philip Seymour Hoffman, renowned for transforming himself into a variety of characters, is also determined to play different roles, people with jobs, a medical doctor, maybe a gangster, not the student role he has customarily played so far, because that would present important challenges for his acting, he said.

But always, the best way to develop as an actor, he said, is to just live -- and to live as normal a life as possible, although that's increasingly a challenge, given his stardom.

"I get told a lot that I look sleepy," he said with a smile, while hardly gesticulating or changing expressions, unlike many actors.

"Basically, I love films. That's why I'm doing this. That is what's at my roots. That's all I believe in."