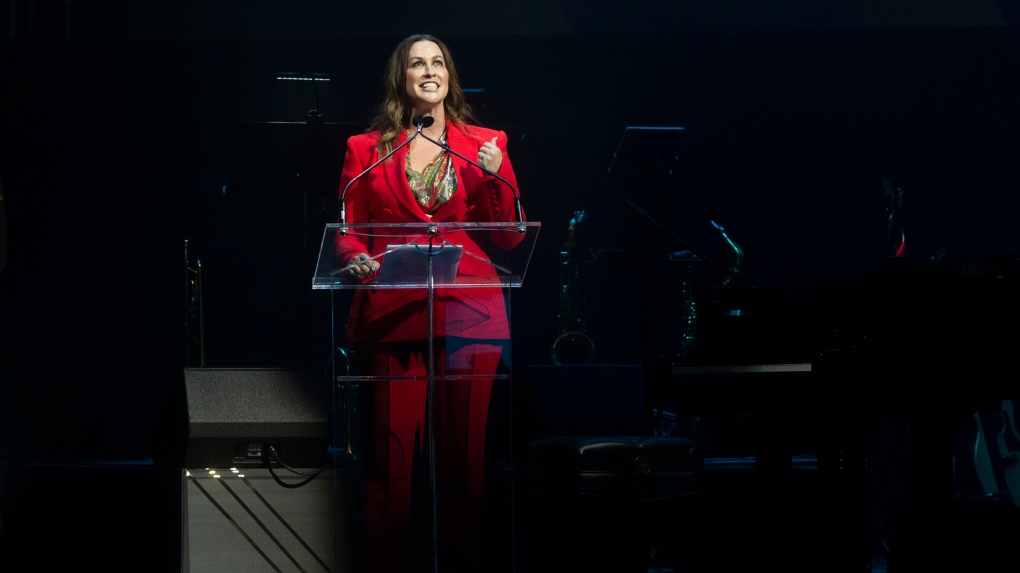 Alanis Morissette accepts her award at the Canadian Songwriters Hall of Fame Gala in Toronto, on Sept. 24, 2022. (THE CANADIAN PRESS/Chris Young)
TORONTO -

Superfans screamed in adoration as hitmakers Alanis Morissette and Bryan Adams were ushered into the Canadian Songwriters Hall Of Fame on Saturday in a star-packed celebration.

Some of the country's best-known musicians gathered to honour the pair, along with fellow 2022 songwriting inductees Jim Vallance, Daniel Lavoie and David Foster at Toronto's Massey Hall.

And throughout the night, a theme of collaboration emerged as several creators explained that songwriting was rarely a practice done alone.

In the case of Adams, his longtime friend and oft writing partner Vallance wasn't just acknowledged for his contributions, he was a fellow inductee, which left Adams feeling chuffed.

"Songwriting for me has always been a team effort," he explained while accepting his honour

"And the thing that makes me most happy about tonight ... is seeing my great friend Jim Vallance be properly honoured."

Vallance met Adams at a Vancouver musical instrument shop in 1978, which marked the start of a fruitful partnership.

Morissette took a moment during her acceptance speech to recognize the mentors that helped elevate her early career, including American songwriter Glen Ballard who co-wrote on her career-defining "Jagged Little Pill" album.

"The best part about songwriting for me is being in a room and feeling safe," she said of her experience.

"When I write it, it's for me," she added. "But then when I share it, it's yours, it's for everyone else to interpret."

Her influence was felt throughout the night as generations of female artists spoke about Morissette's influence on them.

The most touching was 19-year-old American pop singer and actress Olivia Rodrigo, who spoke about how Morissette changed her life with both her music and her mentorship. The two first met on a Rolling Stone photo shoot last year.

"Even more than your long list of musical achievements, I look up to your character and kindness most of all," Rodrigo told her.

"I'll carry the advice that you've given me for my whole life."

Before the speeches began, the Canadian Songwriters Hall of Fame event opened with a performance by Deborah Cox, who brought the house down with a rendition of Foster's "I Have Nothing," written for Whitney Houston on "The Bodyguard" soundtrack.

It earned the Toronto singer an extended standing ovation -- the first of many for the performers who each offered shining takes on a variety of the honouree's songs.

For Morissette, Grammy winner Alessia Cara pulled out a harmonica to carry "Hand it My Pocket" to its powerful finish, a last-minute touch that she added during soundcheck.

Serena Ryder channelled her own angst in a rendition of "You Oughta Know" that saw her bounding across the stage as she belted out the lyrics.

"How do you do that every night?" a bewildered Ryder posed to Morissette, who was seated in the audience.

Nickelback frontman Chad Kroeger gave his fist-pumping interpretation of Adams and Vallance's "Summer of '69," while a medley of "(Everything I Do) I Do It For You" and "Straight from the Heart" by Corey Hart left some women shouting his name as often as they were cheering for Adams.

"The Canadian industry, music and so many people made a big fuss about you and I being these rivals," Hart told Adams from the stage.

"I don't know, maybe there was a tiny shred of truth to that, but I can tell you tonight ... that from day one I already had the deepest respect and admiration for you, sir."

Songwriter Daniel Lavoie rounded out the inductees. He was honoured for rising from roots in Dunrea, Man. to becoming one of the most prominent French-Canadian writers, working with Celine Dion, Luce Dufault, Roch Voisine and Lara Fabian.

The evening closed with another of Foster's songs leaving an emotional impact on the crowd.

Generations of Canadian stars, including Andy Kim, JP Saxe, Charlotte Cardin, and Divine Brown, gathered on the stage to offer a new take on his 1985 charity single "Tears Are Not Enough," originally performed by a supergroup known as Northern Lights.

This report by The Canadian Press was first published Sept. 24, 2022.