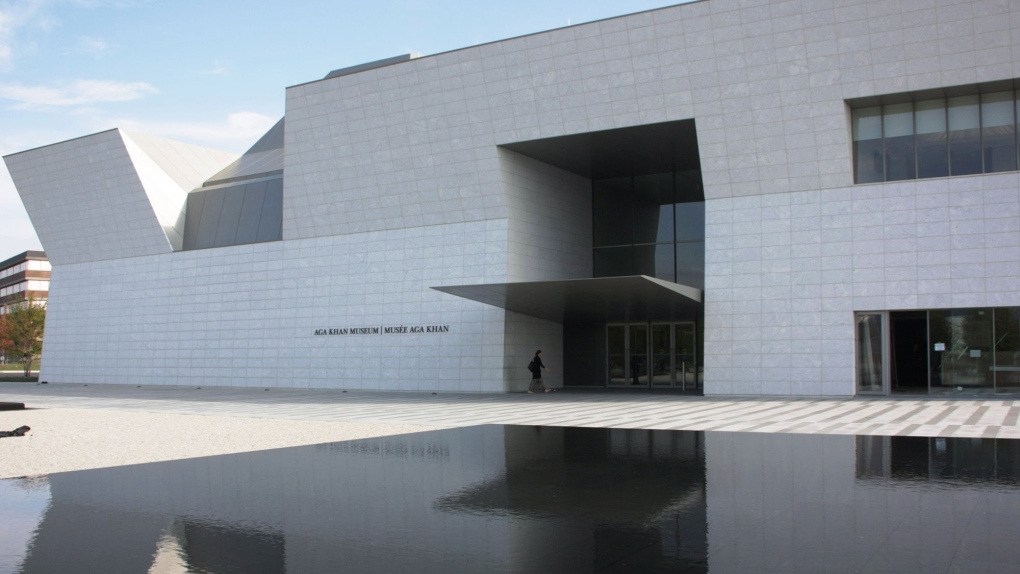 The entrance to the Aga Khan museum in Toronto is seen on Tuesday, Sept. 9, 2014. (Colin Perkel / THE CANADIAN PRESS)

The complex, designed by some of the world's top architects, aims to foster knowledge and understanding among Muslims as well as between Islamic societies and other cultures.

Located on 6.8-hectares, the museum building with its open-air, glassed-in courtyard is linked via a landscaped park featuring five granite reflecting pools to a cultural religious centre dominated by a towering glass roof over its prayer hall.

"You can see that the play of light throughout the building has different nuances and just creates an incredible ambience," said Farid Damji, a volunteer with the Aga Khan Council for Canada.

The Aga Khan, the community's 49th hereditary imam, is also a wealthy philanthropist who, along with members of the faith, bankrolled the new complex.

Despite the close association with Ismailism -- part of the Shia branch of Islam -- the museum intends to reflect the diversity of cultural expressions within Islam, Damji said as workers put the final touches to the interior and exterior elements this week.

"It's not an Ismaili museum," he said.

"It's a museum of Islam and Muslim civilization, so it's really meant to display that diversity."

Designed by award-winning Japanese architect Fumihiko Maki, the museum building has at its centre a "courtyard of light," with heated floor tiles to help snow drain, and a 350-seat auditorium.

The exhibition space itself contains more than one-thousand objects and pieces of art -- manuscripts, drawings, paintings, tapestries, metalwork, ceramics -- from the 8th to 19th centuries.

In the centre of one display area sits a 16th-century fountain made of marble and sandstone in geometric formations that would have been in the reception hall of a palatial residence in Cairo. Nearby, a large 12th century copper candlestick from eastern Iran fills a display case.

Ruba Kana'an, a historian of Islamic art and head of education at the museum, called the collection special.

"It's a significant collection of the art of Muslim societies from different parts of the world," Kana'an said. "It has a variety of masterpieces -- works that are unique in either their beauty or their historical significance."

Paris-based museologist Adrien Gardere designed the interior of the museum and the multimedia elements that are part of the permanent and temporary displays.

The pieces are not meant to be seen in isolation, he said in an interview, adding that the days of a single artifact floating in space in a beam of light are over.

"The world of artifacts is a world of connection and dialogue," Gardere said. "We're in a place where the artifacts dialogue in a transversal way."

The Ismaili Centre is part of a global network of such facilities, including one in Vancouver.

The latest addition to the network -- the handiwork of renowned Indian architect Charles Correa -- features a lounge, library, classrooms and administrative offices as well as the prayer centre with its glass roof and its Arabic-calligraphy reflective wood.

The Swiss-born Aga Khan, an honorary Canadian Citizen, is slated to be on hand for Friday's official opening of the complex.

About 100,000 Ismailis, part of an estimated 15-million strong community in 30 countries, live in Canada.