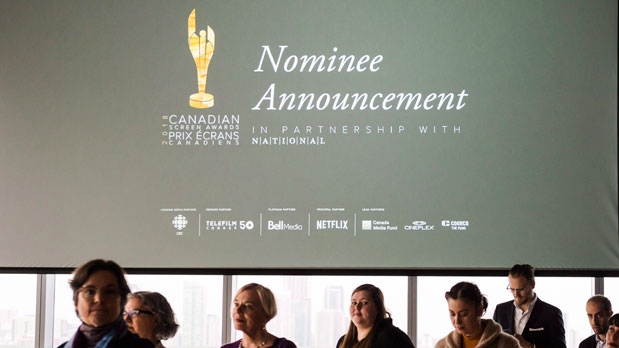 FILE - The Academy of Canadian Cinema and Television announced nominations in the film, television and digital media categories for the 2018 Canadian Screen Awards, in Toronto on Tuesday, January 16, 2018. THE CANADIAN PRESS/Christopher Katsarov

TORONTO -- This year's Canadian Screen Award nominees will have to wait a little longer to find out if they're receiving a trophy.

The Academy of Canadian Cinema and Television says it's postponing the announcement of winners given the "great uncertainty" surrounding the COVID-19 pandemic.

Earlier this month, the academy cancelled a broadcast gala set to air Sunday, as well as all Canadian Screen Week events in Toronto, Montreal and Vancouver.

Organizers issued a statement Friday saying the academy remains committed to celebrating this year's winners "properly when the time is right."

The academy says it plans to share updates about its initiatives and virtual programming soon.

The CBC comedy "Schitt's Creek" has a leading 26 nominations for this year's awards, which celebrate Canadian film, TV and digital projects.

This report by The Canadian Press was first published March 27, 2020