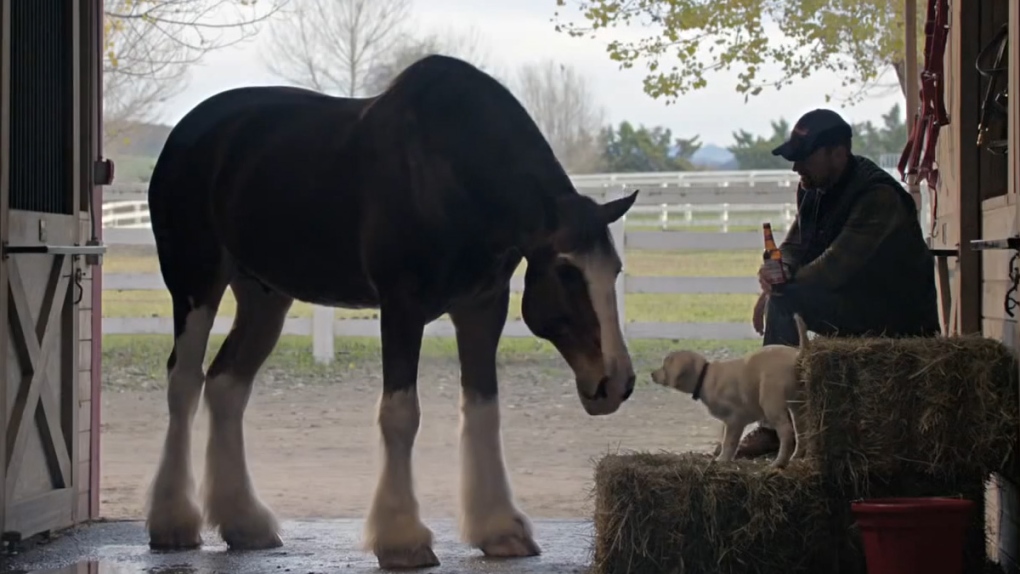 A man is shown with his horse and his dog in this image from a Super Bowl advertisement for Budweiser. (YouTube / Budweiser)

Extravagant commercials are as much a part of Sunday's Super Bowl festivities as the actual game, and for some, they're far more interesting. Lucky for you, we've combed through some of the best ads on tap for this year and collected them here for your viewing pleasure.

The Super Bowl is like Christmas, Boxing Day and Halloween all rolled into one for advertisers. A 30-second ad in this year's broadcast costs about $4.5 million, according to advertising expert Allen Oke. That's because the game has an estimated viewership of 100 million people in the United States and 8 million in Canada.

"The Super Bowl is one of the last real captive events," Oke told CTV News Channel on Sunday. "Advertisers know they are going to get a huge swath of people they can get their message to."

No matter the subject, Oke says a powerful message is what makes any Super Bowl ad live beyond its costly, fleeting appearance on TV.

Here are some of the standout commercials already making the rounds on YouTube ahead of their broadcast premiere.

1. Kim Kardashian's "Save the Data" commercial

Kim Kardashian is kind of narcissistic. But you probably knew that.

The socialite and reality TV star dials up that narcissism with a tongue-in-cheek ad for T-Mobile done in the form of a charitable plea.

"Each month, millions of gigs of unused data are taken back by wireless companies. Tragic," Kardashian says. "Data you paid for that can be used to see my makeup, my backhand, my outfits, my vacations, and my outfits."

Kardashian's words are accompanied by several shots of her taking selfies with her phone. And yes, she's posing seductively and wearing different outfits each time.

Snoop Dogg describes the symptoms of being "hangry" (so hungry you're angry) while Gottfried acts them out.

If you've ever wanted to hear the guy who voiced the parrot in "Aladdin" complain about his pants and shout at pickles, this is the ad for you.

What would the classic show 'The Brady Bunch' look like if Marcia was replaced with tough-as-nails Mexican actor Danny Trejo?

If that question has kept you up at night over the past 30 years, you can finally sleep easy. Snickers has you covered.

Trejo plays a very grumpy, axe-wielding 'Marcia' in a modified 'Brady Bunch' clip. It takes a Snickers bar to restore the real Marcia to her friendly self.

Why? Just watch the ad.

The hare gets off to a blazing fast start, but the tortoise manages to come from behind after stumbling upon a Mercedes Benz auto factory in the middle of the forest.

The tortoise hops behind the wheel of a fresh-off-the-line car and speeds past the hare, offering a wink out the window as he goes by.

The tortoise also has a pretty female hare in the passenger seat of his car.

It sucks when your phone runs out of batteries. The weather goes crazy. Your household furniture starts defying the laws of gravity. Dead fish rain from the sky. Dogs walk people.

Budweiser continues to pluck the heartstrings this year with another ad dramatizing the friendship between a puppy and a Clydesdale horse. This latest one features the dog following the horse to another farm after the horse is sold. The intrepid little guy makes his way through the city to a distant farm and stares down a wolf in search of his friend. The Clydesdale shows up at the last moment to save his little buddy, and he brings a herd of equally large horses with him.

The dog then leads his new pack of Clydesdale pals back to his owner's farm.

Dove's #RealStrength ad is a montage of touching father-daughter and father-son moments with only one, repeated word: "Daddy."

A toddler asks Daddy for help with his shirt. Another chases Daddy on the playground. Later, a teenager blushes as his father gives him a hug before he heads off to prom. A young woman says the word just before she walks down the aisle, and another says it as she announces she's been accepted to college.

If you don't feel something watching this one, you're made of stone.

The NFL came under heavy criticism earlier this season for its handling of Baltimore Ravens running back Ray Rice, after footage surfaced of Rice allegedly knocking his then-fiancee unconscious in an elevator in Las Vegas.

Rice's legal and athletic futures remain uncertain, but the NFL promised to take a firm stance against spousal abuse in the wake of the scandal.

This video is part of that tougher stance. It shows images of an empty home where something untoward has obviously happened while playing a recorded 911 call. In the call, a woman pretends to order pizza while the 911 operator on the other end tries to find out what's happening.

"Is there someone in the room with you?" the operator asks.

"When it's hard to talk, it's up to us to listen," a message says at the end of the video.

Purina continued its series of "Dear Kitten" videos with another cute and naive cat's-eye-view of humans, this time set during a Super Bowl party. The older of two house cats instructs the younger in a wise voice about how Super Bowl parties work – from a feline perspective.

According to the elder Purina cat, humans gather in traditional robes (jerseys) and stuff moist food in their mouthes while tiny people in the light box (TV) do things. Occasionally the humans stand up and taunt each other, and someone gets to hit (read: high-five) everyone else.

If there's one commercial this Super Bowl that'll get you motivated to drop the cheese dip and make something of yourself, it's this Toyota Camry ad.

The one-minute commercial features U.S. Paralympic snowboarder and model Amy Purdy, a do-it-all athlete who does it all on a pair of carbon fibre blades (a la Oscar Pistorius). Purdy runs through an array of extreme sports while the commercial plays audio of a famous pre-fight speech delivered by heavyweight boxing legend Muhammad Ali in his heyday.

"I done something new for this fight," Ali says. "Only last week, I murdered a rock. Injured a stone. Hospitalized a brick. I'm so mean, I make medicine sick."

Purdy is shown jogging, snowboarding, modelling, dancing, mountain biking and driving in a Camry during the rant. Meanwhile, Ali tells us why he's the baddest man around – and why his foe is in trouble.

"All you chumps are gonna bow when I whoop him," Ali says. "I'm going to show you how great I am."