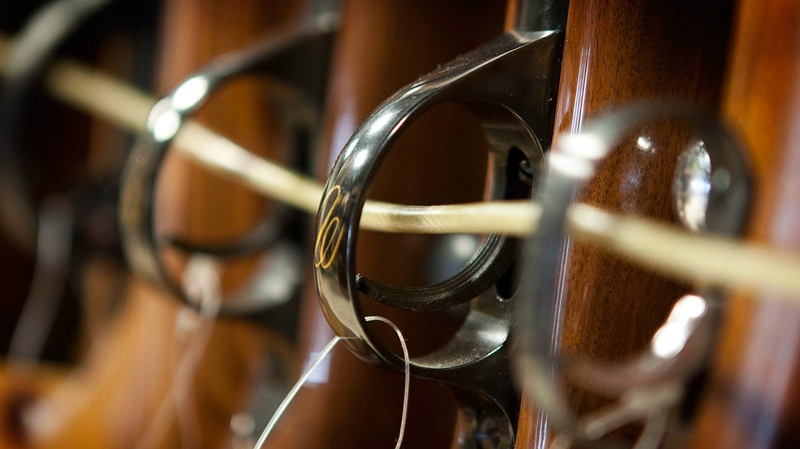 OTTAWA - Scrapping the requirement to register rifles and shotguns could fuel illegal firearms trafficking across the Canadian border, warns an internal federal memo.

It says the move would weaken import controls by eliminating a requirement for border officials to verify firearms coming into the country.

"Such a loophole could facilitate unregistered prohibited and restricted firearm trafficking into and through Canada," says the declassified memo, originally marked secret.

The memo was released under the Access to Information Act to the National Firearms Association and posted along with hundreds of other pages on the organization's website.

It was prepared by Mark Potter, a senior Public Safety Department official, for an assistant deputy minister as Parliament was debating a private member's bill to kill the registry. That bill was narrowly defeated in the House of Commons last year.

At a Commons committee Tuesday, Public Safety Minister Vic Toews was quick to dismiss his own department's analysis, calling it "factually flawed" and "a bit of a red herring."

Upon winning re-election with a majority, the Conservatives made legislation to end the long-gun registry a priority. The bill introduced last month would halt registration of long guns and permanently delete more than seven million files on gun ownership.

Many police, health and victims' groups oppose the move, while anglers and hunters generally welcome plans for the registry's demise.

At committee, Toews called the long-gun registry a "failed boondoggle."

"There is no evidence that it has stopped a single crime or saved a single life."

The internal memo notes that businesses and individuals who have a valid firearms licence and supporting documentation may import non-restricted firearms such as common hunting rifles into Canada -- a process administered by the Canada Border Services Agency.

Firearms brought into Canada must go through a verification process, to ensure people have the proper licensing privileges to possess the gun they're importing.

Verification, the responsibility of the RCMP-administered Canadian Firearms Program, involves providing a detailed description of the firearm and in some cases may entail a physical inspection.

The memo says the border services agency is "neither trained nor required to verify firearms," and the requirement would disappear along with the long-gun registry.

As a result, says the document, restricted or prohibited weapons could be brought into Canada -- either intentionally or otherwise -- under the guise of unrestricted guns.

Toews told MPs the bill would not diminish import controls, but did not explain how the verification process would work in future.

Blair Hagen, a spokesman for the firearms association, said eliminating the registry will not mean looser controls on guns at the border.

"I think they're alleging that some people will try to fudge it a bit to get illegal guns into Canada and, frankly, that's offensive."

The Public Safety memo also says elimination of the registry would "significantly compromise" law enforcement's ability to trace firearms in Canada -- for instance, linking a weapon left at a crime scene with an individual owner -- or to support foreign police forces trying to do the same.

"In such a scenario, Canada would no longer meet its international commitments relating to firearms tracing and record-keeping."