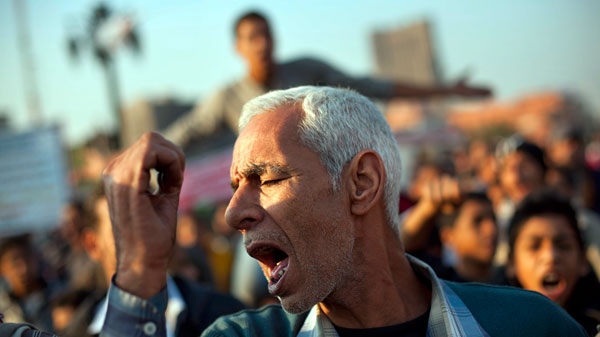 CAIRO - The runoff Monday for Egypt's first-round parliamentary elections heated up tensions between competing Islamist groups that have so far dominated the vote, with scuffles breaking out and allegations of death threats.

The strife shows the challenges facing the front-runner, the Muslim Brotherhood, after hard-line Islamist parties made a surprisingly strong showing. The more moderate Brotherhood is now under pressure to reassure both Egyptians and foreign allies that the country is not going down an extremist path and remains committed to democratic transition.

The Brotherhood, Egypt's largest and best organized political group, is in the lead so far, with about 37 per cent of the vote, according to partial results released Sunday. But the hard-line Al-Nour bloc grabbed nearly a quarter of the vote for the ultraconservative Salafis, who seek to impose strict Islamic law in Egypt.

The strong Islamist showing came at the expense of liberal activist groups that led the uprising against Hosni Mubarak, toppling a regime long seen as a secular bulwark in the Middle East.

Nabil Abdel-Fattah, a senior researcher at Al-Ahram Center for Strategic Studies, said the Islamists are in a "fierce" battle over the same ideological base."

"They both have high financial resources. The Brotherhood have experience and social networks," he said.

The Salafis "have no (political) experience, but are relying on a long history ... of concessions" by the Mubarak regime, which "left them to expand as a way to counter the power of the Muslim Brotherhood."

"This is going to be a very conservative Islamic parliament," he said. "The conflicts will be between that trend and the democratic forces."

The Salafis espouse a strict interpretation of Islam similar to that of Saudi Arabia, where the sexes are segregated and women must be veiled and are barred from driving. They speak openly about their aim of turning Egypt into a state where personal freedoms, including freedom of speech, women's dress and art, are constrained by Islamic law.

Reform leader and Nobel Peace Prize Laureate Mohamed ElBaradei warned that the strident positions of some ultraconservative leaders have sent "shock waves" both inside and outside Egypt.

Tensions between the Brotherhood and Salafis were simmering Monday in some runoff districts.

In southern Assiut province, there were scuffles and even allegations of death threats against Brotherhood candidates by supporters of Gamaa Islamiya, a former militant group that is part of the Al-Nour bloc. The province is a stronghold of the group, which fought the Mubarak regime in a bloody insurgency in the 1990s.

Since Mubarak's ouster, hard-line Islamists, many of whom were released from prison, exploited a growing security vacuum in the country and grew increasingly assertive in a push for power. In Assiut, they wrested control of mosques from government-appointed preachers and installed their own prayer leaders. The city is filled with signs exhorting residents to follow Islamic teachings and women to wear the hijab, or Muslim headscarf.

"The hijab is obligatory," one sign read. "Take your eyes off women," another warned.

"A cleric was beat up, insulted and ordered to stay away," a Muslim Brotherhood campaign worker told the AP. "Our people were threatened that if they entered villages around this city, they will be shot dead," said the worker, who spoke on condition of anonymity for security concerns.

Despite the rivalry, Saad el-Katatni, the secretary general of the Brotherhood's political arm, the Freedom and Justice Party, said he didn't expect election competition to spill over into parliament.

He said his party will work to form a broad coalition that includes liberal trends, and "absorbs" the Islamist parties who are new to the political scene.

"Some of the new parties wanted to be alone, to get as many seats as possible and to be seen as powerful in the parliament," he told the AP. "They will need to be part of the group (once in parliament). If they work alone, it will be a big loss for them."

He said it was too early to speak of specific parliamentary alliances, but so far, the major Salafi party has signalled it won't join, and has already walked out on a pre-election coalition with the Brotherhood.

Still, many fear the hard-line views of the Salafi and other radical groups may undermine the Brotherhood's attempt to maintain a moderate line inside parliament.

Voter Ali Serour, 49, said he voted Monday for the Brotherhood party candidate and a veteran Mubarak official "to balance things out a bit".

He said the Brotherhood "will be much more civil than religious. I think they will work with other parties to get things done."

But the Salafis, he said, "want to apply every letter of Islamic law. People won't accept that and they'll push them out in a revolution like they did Mubarak."