Double dip recession could be different from past 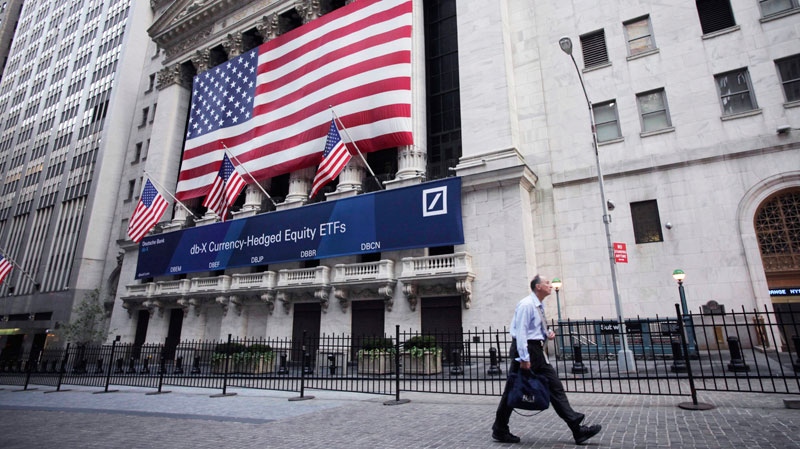 TORONTO - Double dip might sound sweet atop an ice cream cone or a doughnut - but history suggests that for an economy, it means a bitter period of low employment and troubling finances for those who suffer through it.

But even if the Canadian economy slips into recession for a third time in the past hundred years - a fate that is still far from inevitable _it is destined to play out differently than it has in the past, economists say.

Fears that the U.S. economy - the world's largest - could contract in the face of a slew of weak economic data has resulted in stock market havoc in recent weeks that has wiped out trillions of dollars in investments and savings and made people nervous on both sides of the border.

Last week alone, Canadian consumer confidence dropped to its lowest point in two years, and TD Bank estimated zero growth for Canada in the second quarter, noting there was a chance the economy actually shrank.

Growth forecasts for the rest of 2011 have been slashed. If American GDP figures turn negative for two consecutive quarters, the country will officially be back in recession. Economists say if that happens, Canada could follow suit.

A "double dip,'' also known as a W-shaped economic cycle, has been increasingly bandied about as it becomes apparent that not just the United States but some of the world's biggest economies in Europe may be unwilling to make bold moves to deal with their debt.

The term refers to an economy that emerges from recession with a short period of growth, only to slump again into contraction. Canadians have seen it occur twice - the Great Depression in the 1930s and more recently during inflationary times in the 1980s.

It can mean a prolonged period of high unemployment and stock market selloffs. Dejected consumers are less likely to spend, which can prompt a downward spiral that continues until political powers apply a jolt.

"Periods of double dip recession are few and far between,'' said Aron Gampel, deputy chief economist at Scotiabank, who believes another recession can still be avoided with concerted efforts.

"The problem now is that the headwinds the developed world is facing are very significant because they're debt-related ... it's a suffocation of global growth caused by the need to pare down debt.''

David Jacks, an economics professor at Simon Fraser University, puts the odds of a double dip recession at 50-50.

But he said it might be a decade before the country emerges from "this mess that was created over the past 10, 20, 30 years.''

People were too quick to assume the downturn sparked by the global banking crisis in 2008 would be a "garden variety'' recession, like we saw in the 1990s and 2000s, Jacks said.

With growth slowing so soon into a recovery, the economy increasingly appears to be headed toward something more akin to what Canadians saw from 1929-33, then in 1937-38 and again in the 1980 and 1981-82 setbacks, he added.

But economists are skeptical about drawing meaningful lessons from those eras because the current crisis is wider in scale as the global economy is more interconnected and could be longer-term because it stems from a cycle of debt handed down from consumers to banks to governments.

The continuing debt crisis is unlike anything seen in the past because it is framed by a still-fragile global financial sector, said Finn Poschmann, vice-president of research at the C.D. Howe Institute.

"The scale of the sovereign debt risks are much larger in aggregate relative to the economy,'' he said.

"The indicators suggesting an economic slowdown in a number of areas, most worryingly in the U.S., are now occurring in the face of a financial marketplace that has not recovered on a global basis,'' he said.

While Canada's economy wouldn't necessarily follow into recession, he added, the economies are so intertwined that "a downturn in the U.S. market would have a readily detectable impact on Canadian output indicators.''

Canada followed the U.S. into a double dip recession in the 1980s.

Prior to the 1980 slump, a combination of an oil price shock and overall high inflation led the U.S. Federal Reserve to raise interest rates into the double digits, which slowed consumer growth and eventually put the brakes on hiring.

Continued high interest rates again plunged the Canadian economy into recession in the second half of 1982. The recession proved to be deeper, more widespread and longer than any previous post-Second World War downturn until that time, according to a 1985 Canada Yearbook entry.

Gampel noted the difference between that double downturn caused by a rapid spike in interest rates and the current scenario in which North American central banks are leaving lending rates at ultra-low levels.

But Jacks said the 1980s double dip was similar in that consumer psychology helped to extend the slowdown.

One lesson, he said, is that the psychological effects of low interest rates can help to keep another recession at bay, he said.

"When people see their brokerage accounts are worth more money and they feel that their house has appreciated in value, they're going to be more willing to . . . spend as normal.''

However, Armine Yalnizyan, a senior economist at the Canadian Centre for Policy Alternatives, said the closest historical parallel to the crisis the world now faces was the 1930s period.

Prior to the Depression, there was a global supply chain expansion and a lot of emerging economies coming on stream, she said. In addition, people borrowed money to speculate and then investor confidence was shaken to the core.

"The market was full of instability and pack animal mentality which we've seen in spades in the last couple of weeks.''

However, Gampel of Scotiabank said that given the huge global strides over the past century, economies have evolved to the point that a comparison with the Depression era is unrealistic.

"A lot of the problems were seeing are structural in nature and essentially doom us to a slow and uneven growth path going forward. However, it doesn't necessarily mean that we have to go into recession,'' he said.