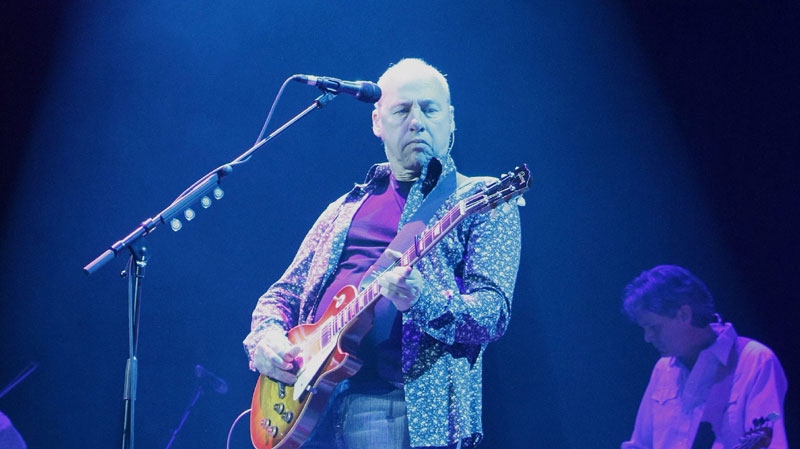 British musician Mark Knopfler performs at the SAP Arena in Mannheim, Germany, during his first show in Germany of his 2008 European tour, on Friday, April 11, 2008. Knopfler was head and co-founder of the band Dire Straits. (AP Photo/Daniel Roland)

TORONTO - Classic rock fans and radio stations across Canada have decided that a ruling against Dire Straits' 1985 hit "Money For Nothing" simply ain't workin'.

Days after the Canadian Broadcast Standards Council ruled the song unfit for radio because of a gay slur in its lyrics, radio stations in Halifax and Edmonton planned to rebel by playing an unedited version of the song on repeat for a full hour.

Meanwhile, an outcry from fans continued to reverberate through the Internet, with commentators debating the decision furiously across various formats -- "Dire Straits" and "CBSC" were both still trending topics on Twitter in Canada.

Even Dire Straits keyboardist Guy Fletcher weighed in on his personal website, responding to fans' questions by calling the decision "unbelievable" and referencing a conversation with the song's writer, Mark Knopfler.

"Mark tells me that due to the ban, he has now substituted the word faggot for 'fudger'.... for Canada," Fletcher wrote.

"I reckon Canada could ban about 75% of ALL records ever made," he added later. "Especially those made in America before 1950."

The council ruled on Wednesday that the tune violates the industry's code of ethics because its lyrics include the word "faggot" three times.

While the decision was applauded by gay rights group Egale Canada, the program director for Halifax rock station Q104 said the station is concerned with the precedent set by the decision, calling it a "tragic error in judgment."

The station said it planned to have members of the gay and lesbian community on hand for its marathon, which was scheduled to run between 9 and 10 p.m. local time.

"We believe that this decision may trivialize the meaningful work done to further the cause of the LGBT community and could actually work against them by creating a sense of excessive political correctness at the cost of the fundamental freedom of speech," Q104's J.C. Douglas said in a statement.

Edmonton classic rock station K-97 -- which, like Q104, is owned by NewCap Radio -- also planned a one-hour marathon, according to a note on the station's website.

But CITI FM in Winnipeg moved in the opposite direction. While the panel concluded that "Money for Nothing" would be acceptable for broadcast if suitably edited, Scott Armstrong, CITI's general manager and program director, says "Money for Nothing" won't be on the playlist at all anymore.

As a policy, they only present songs as they were originally released on album. Armstrong says they don't play any songs that have been censored.

"We're not prepared to play the edited version that does exist of that song," said Armstrong, who called the council's decision "ill-advised."

"We have an obligation to respect the conclusion that (the council) came to -- that doesn't mean that we have to agree with them. ... We don't agree with the decision, and I think our listeners, while they would rather hear the song than not hear the song because it's been a pretty popular song for a lot of years -- for the better part of 25 years -- but I think they respect what we're doing."

"It's just disappointing that that type of decision has been reached based on a complaint of one person."

The scrutiny of the song was prompted by an objection from a listener of radio station CHOZ-FM in St. John's, N.L.

The ban applies to every Canadian radio station.

"It's very important that even things that we may 'know' in quotation marks are happening, that we don't deal with them unless there's a complaint," he said in a telephone interview.

Still, he noted that such defiance was, as far as he could remember, unprecedented.

The controversy over "Money for Nothing" isn't, however.

Ever since the song was released in '85 -- when it hit No. 1 in Canada and the U.S. and spawned a memorable music video for then-fledgling music network MTV -- songwriter Mark Knopfler has defended himself from accusations of homophobia.

He has said the song was written from the perspective of a working-class man who was unimpressed by the millionaire rock stars he saw jumping about on MTV.

The story was still receiving international press on Friday, with London tabloid the Daily Mail running the story under in its "Don't Miss" banner and Fox News using the headline "No Way, Eh!" for its take on the situation, which earned 150-plus comments from readers.

Much of the outrage seems to be centred on the fact that the song was meant with irony. But Cohen has said that the council usually considers such distinctions in context less relevant in short pop songs than in TV dramas or documentaries.

That didn't satisfy Douglas, who compared the character in the song to Archie Bunker -- the irascible bigot in the 1970s sitcom, "All in the Family."

"(Bunker is) one of the great fictional characters of our time, and one who illustrated how completely absurd a bigot can be," he said.

"To deny radio the right to reveal that character, warts and all, is a tragic error in judgment and puts the (council) on the slippery slope to censorship."