Dinosaur fossil found in Alberta in 1916 a new species 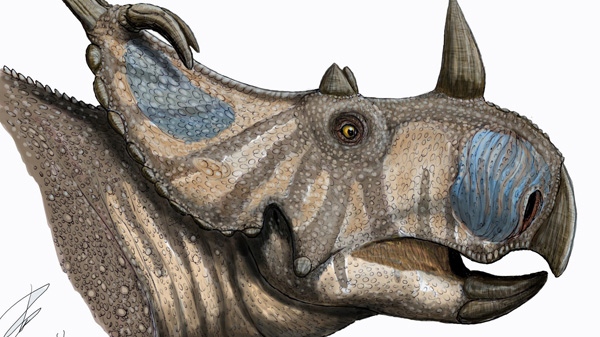 Artist's rendering of the skull bones of Spinops sternbergorum. A team of international scientists says a newly rediscovered dinosaur species once roamed the planes of southern Alberta. (Lukas Panzarin / THE CANADIAN PRESS)

After gathering dust on a shelf for more than 90 years, two previously ignored skulls have been identified as a new dinosaur species which once roamed the plains of southern Alberta.

The bones of the newly named Spinops Sternbergorum were originally discovered southeast of Calgary in 1916 by a father and son science team.

Charles and Levi Sternberg — who are now honoured in the new dinosaur's name — sent two partial skulls to London's Natural History Museum and even voiced a hunch that the bones might indicate a previously unknown dinosaur.

But those examining the skulls at the British museum at the time disagreed, labelled the fossils as "rubbish" and the bones were promptly forgotten for years.

Nearly a century later, a team of international scientists rummaging through the museum's collection of bones stumbled upon the skulls, re-examined them closely and found that they belonged to a species unknown until now.

"We had no idea that it was out there, that's why it was so surprising to find it," said Andrew Farke, curator at California's Raymond M. Alf Museum of Paleontology and lead author of a study which named the new dinosaur.

"When several colleagues and I spotted these specimens in the collection, we immediately knew it was something different."

A number of scientists, including paleontologists from Alberta's Royal Tyrrell Museum, were involved in the project on the new dinosaur which ultimately resulted in a paper published in the journal Acta Palaeontologica Polonica this month.

They believe the Spinops Sternbergorum was a smaller cousin to the Triceratops and lived 76 million years ago.

The two-ton plant-eater features a distinctive horn projecting from the top of the nose and a boney neck frill with two spikes protruding backwards and two hooks curving forwards.

Since they examined two different skulls displaying the same structural characteristics, scientists are certain the dinosaur is in fact an entire new species and not an individual anomaly, said Farke.

Scientists are now hoping the new discovery will motivate paleontologists to unearth more fossils of the species, which so far has only been found in Alberta.

"We don't know what made them go extinct, it may have been local ecological change, they may have been out-competed by other horned dinosaurs, we just don't know for sure," said Farke. "That's why finding more fossils of this animal is really important, just to understand more about its history."

Study of the new dinosaur so far has suggested its long frill spikes are located in a different position to that seen in most other horned dinosaurs, implying they evolved independently. Scientists say the finding allows a more accurate reconstruction of evolutionary relationships and will be investigated further.

The discovery of the new species comes at a time when scientists' knowledge of horned dinosaurs is "increasing exponentially," said Farke, who added that Canada has an important role to play in the deepening of our knowledge on the creatures that roamed the earth millions of years ago.

"Over the last 20 years or 30 years there's been a real renaissance of paleontology in Alberta," he said. "I think Alberta is going to feature really prominently in the paleontology news over the next few years."