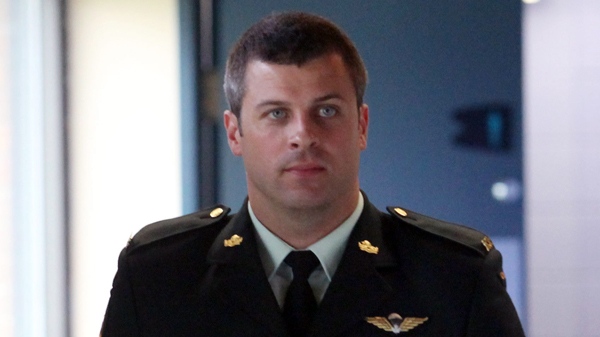 Capt. Robert Semrau, who has pleaded not guilty to second-degree murder in the 2008 death of a wounded Afghan insurgent, takes a break during his military trail in Gatineau, Que. on Saturday, July 17, 2010. (Patrick Doyle / THE CANADIAN PRESS)

GATINEAU, Que. - The fate of a Canadian Forces captain charged in a battlefield murder in Afghanistan is now in the hands of a jury of his uniformed peers.

As the historic murder court martial entered its final phase, the four-member military panel began deliberations Saturday in the case of Capt. Robert Semrau, 36, charged with second-degree murder in the October 2008 shooting death of an injured Taliban fighter in the southern Afghanistan province of Helmand.

Military Judge Lt.-Col. Jean-Guy Perron took more than four hours to deliver his final instructions, telling the jurors that Semrau is to be presumed innocent, and that the prosecution bears the burden of proving his guilt beyond a reasonable doubt.

Semrau never testified, and his lawyer presented no evidence in a trial that spanned four months. And Perron told the jury the accused man was under no obligation to do so.

Perron read 84 pages of legal instructions to guide deliberations. No one knows for certain when the panel will reach a verdict. Under law, their deliberations will remain forever secret.

The panel deliberated for about three hours on Saturday and will resume on Sunday morning.

Before beginning their task, the jurors asked Perron about Semrau's mental state in a written question, but the judge told them that was not an issue that was raised over the course of the trial.

The judge reminded the panel to restrict its deliberations to what was heard inside the courtroom.

The trial has heard evidence that Semrau told fellow officers after the shooting that he simply wanted to put a wounded and dying enemy fighter out of his misery.

This dramatic legal-military saga began on Oct. 19, 2008 on a dusty battlefield in the Taliban-infested Helmand province, just west of Kandahar, the province where most of Canada's soldiers are stationed.

Semrau was part of a team of Canadian Forces mentors to the Afghanistan National Army.

Following an intense fire fight that pitted Canadian and Afghan forces against the Taliban, an insurgent lay on the verge of death. The trial has been told that Semrau fired two rounds from his rifle into the dying man.

An Afghan National Army captain, who was on the patrol with Semrau, has testified the Taliban fighter was "98 per cent dead" when he was found.

The insurgent had been strafed by a U.S. helicopter gunship and witnesses have described serious injuries, including a severed leg, and a gaping hole in his abdomen.

In all, Semrau faces four charges -- two under the Criminal Code and two under the National Defence Act -- but the most serious is second-degree murder, which carries a mandatory life sentence with no parole eligibility for 10 years.

If the jury acquits him of second-degree murder, it will consider whether he is guilty of attempted murder.

In addition, Semrau faces two charges under the National Defence Act: that he behaved in a disgraceful manner and that he was negligent in performing his duty.

"It is not enough for you to find Capt. Semrau is probably guilty," Perron said in his final charge. "Likely guilt is not proof beyond a reasonable doubt."

In painstaking detail, Perron reviewed key evidence of all 12 prosecution witnesses and laid out the legal questions the jury must consider and the burden of proof the prosecution must meet.

Based on Perron's instructions, the jury could acquit Semrau of the most serious charge -- second-degree murder -- if it finds a reasonable doubt that his decision to fire two rounds into an already badly-wounded insurgent actually contributed to his death.

"The fact that no body has been found is an important factor," Perron said, but added that the prosecution does not have to provide a corpse to prove the offence.

Semrau's lawyer has argued that the prosecution did not prove its case beyond a reasonable doubt and must therefore acquit his client.

The prosecution has argued that there was no doubt Semrau fired the fatal two rounds, and that the evidence of other witnesses shows the captain made a number of self-incriminating statements.

Semrau is a married father of two girls and had a spotless record with the British and Canadian militaries.

He was joined in court by his wife, Amelie, and his older brother, Bill, who came from Western Canada.