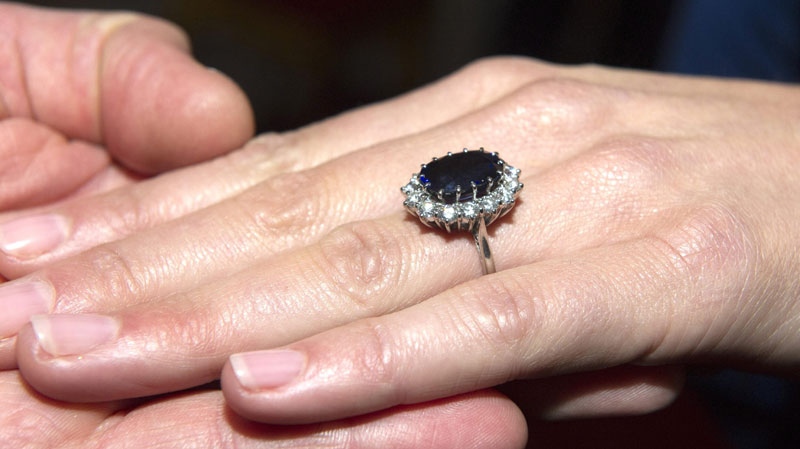 Prince William holds her hand as Kate Middleton wears her engagement ring which once belonged to Diana, Princess of Wales, on the day their engagement was announced in London Tuesday Nov.16, 2010. (AP Photo/Arthur Edwards, pool)

The royal engagement ring Prince William presented to Kate Middleton last fall is putting sparkling sapphires back in the spotlight, just like it did when Princess Diana first wore the ring three decades ago.

Jewelry professionals say the demand for sapphire products is soaring since Kate said yes to the prince's proposal, with traditional and online jewelry retailers reporting increased sales of replica rings and blue gemstones in the lead-up to the royal wedding.

Thirty years ago, Diana picked out the 14-diamond-and-sapphire ring from a selection of pieces by Garrard -- the English company that until recently served as the Crown jeweller since the reign of Queen Victoria.

When Diana showed off her ring to the press outside the gates of Buckingham Palace in February 1981, buyers flocked to jewelry stores in search of their own sapphire stones.

Duncan Parker, the president of the Canadian Gemmological Association, recalls the wave of interest that crested in Canada when the public first got a glimpse of Diana's ring.

"When Prince Charles originally gave the ring to Diana, the price of sapphires did, indeed jump up, and we are, again seeing sapphire prices going up," Parker told CTV.ca in a recent email, describing the trend that has reemerged with William and Kate's pending nuptials.

This time around, Parker has seen jewellers creating their own replica rings for speculative reasons, thinking that more and more people are going to come looking for sapphires in the months to come.

In Canada, jewelry stores such as Birks & Mayors have seen an increase in walk-in clients, who simply want to see a sapphire for themselves.

"Customers are curious about it," said spokesperson Eva Hartling, who said there has been a noticeable uptick in sapphire inquiries since news of the royal engagement broke.

For those who want to wear their own version of Kate's ring, jewelry experts say that the cost of a replica will depend on the cut, the size and the quality of the stone and related materials.

Parker told CTV.ca that someone could make a simple knock-off of Kate's ring at a relatively affordable cost, using coloured glass and an inexpensive ring setting. Maybe even for $50 or $100.

But to make an authentic replica with a similar-sized sapphire would be a much more expensive endeavour.

Parker believes that Kate's sapphire is somewhere in the neighbourhood of 18 carats in weight, which is "difficult to come across."

But if jewellers were to get their hands on a sapphire that big and that beautiful, and surrounded it with 14 diamonds in a similar ring setting, Parker says such a ring would probably be $200,000 to $250,000.

Even if many Canadian royal watchers aren't in the market for such spectacular sapphires, they are certainly reading about them on the web.

Google Canada representatives say searches for "sapphire engagement rings" are up 60 per cent over what they were a year ago.

And when you look at a graph of the daily searches for the same term over the past year, there is a startling peak of interest in the middle of November 2010 -- corresponding exactly with when William and Kate announced that they planned to marry.

Chantal Rossi, the retail industry manager for Google Canada, says Canadians are especially hungry for information about the ring that is worn by their future Queen.

In a recent telephone interview, Rossi told CTV.ca that searches for "Kate Middleton engagement ring" are proportionately higher in Canada than in the United States and even the United Kingdom.

But that's not to say U.S. and U.K. royal watchers are not swooning over sapphires.

London's Daily Mail has reported that shopping channel QVC saw sales of its "Epiphany Platinum Clad Diamonique" ring jump by 800 per cent after William popped the question in the fall. And CNBC reporter Jane Wells has reported that U.S. jeweller Blue Nile has seen its stock jump 35 per cent since the engagement, in no small part because of the similar rings it has been selling in its stores.

Contemporary biographies suggest that the engagement ring that Diana picked out cost about 28,000 pounds when it was purchased in 1981.

But to William, the ring is a priceless heirloom that was first worn by his mother and now by his future wife.

The prince told Britain's ITN last fall that he kept close watch over the ring when he carried it Kenya during the trip in which he proposed to Kate.

"I literally would not let it go, wherever I went I was keeping hold of it, because I knew this thing if it disappeared, I would be in a lot of trouble," William told ITN.

William said he chose to propose with the blue sapphire his mother wore to "keep her close" to the celebrations that she will not be able to take part in.

In the same interview, Kate joked that she hoped that she looked after it properly, to which William added that "if she loses it, she's in big trouble."