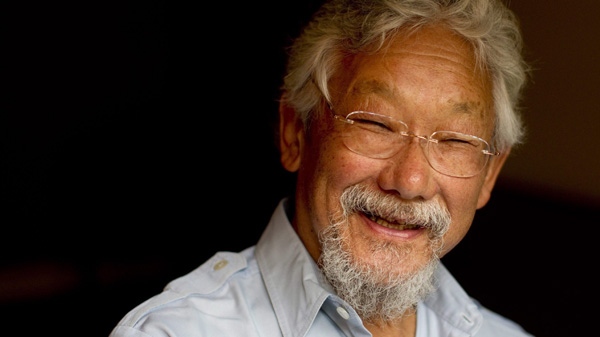 David Suzuki poses for a photo as he promotes his film "Force of Nature" at the Toronto International Film Festival, in Toronto on Thursday September 9, 2010. (THE CANADIAN PRESS/Chris Young)

VANCOUVER - For two-thirds of his life, noted Canadian scientist David Suzuki has rooted all his efforts in crusading for the environment and being a wellspring of scientific knowledge about the natural world.

Yet even as he received a lifetime achievement award Thursday in Vancouver, the 74-year-old said the planet is in "far worse shape" today than when he began spreading his message almost 50 years ago.

"We've gone backwards," he said in an interview. "I would dearly love to be wrong in everything I've said. I take no pleasure in a recognition like this in view of the fact the challenge is getting bigger and bigger."

Suzuki began putting Mother Earth in the spotlight when he started his television career in 1962, chipping away at the notion the world's resources would never run out. Since then, he's watched carbon flood into the atmosphere, massive oil spills in the oceans and development pave over thriving ecosystems.

Despite such devastation, the Vancouver native still hangs on to a "very slender thread" of hope -- he's got grandchildren and doesn't believe preaching fire and brimstone will inspire them to act. So in the years he calls his "death zone," Suzuki said he's got an "enormous responsibility" to do the "most important" work of his life.

"I am freed from any desire for fame or money or power and now I can speak the truth that comes from my heart," he said. "I believe that's the role of elders, to look back over a lifetime lived and to try to distill lessons learned in that lifetime to try and pass on to future generations."

Literary icon Margaret Atwood, who's been friends with Suzuki for more than 30 years, presented him with the George Woodcock lifetime achievement award at a gala fundraiser for The Writers' Trust of Canada. It's the 18th annual award for outstanding literary achievement in British Columbia, and is handed out by the City of Vancouver, the Vancouver Public Library and the non-profit Pacific BookWorld News Society.

Suzuki popularized science and environmental issues by authoring 52 books, hosting CBC-TV's long-running The Nature of Things and co-founding the David Suzuki Foundation. He's been awarded the Order of Canada, about 25 honorary degrees and received an "Alternative Nobel" prize from the Right Livelihood Foundation.

But in his early days of talking science, Suzuki didn't always put a positive spin on what the average Joe or Jane could do to help the planet, Atwood said.

"I felt he needed to understand the fact that people can't absorb too much doom and gloom unless there's something you can do about it at the end," she said in an interview prior to handing him the award. "The last five minutes have to be 'But -- if you do this, then this awful thing won't happen.'

"And he has come round much more to that way of presenting things."

Atwood, an honorary board member of Suzuki's foundation, said he's gained Canadians' trust because he's dedicated himself to the cause from Day 1 and he knows how to communicate "the right stuff."

"Some scientists can't do that," she said. "They can do their science but they can't explain to people why their science is important."

Those skills have ensured millions of Canadians watched his shows over the decades, empowering him, and politicians understand that, Suzuki said.

He urged Canadians to seize the opportunity of a likely upcoming federal election to voice what they care about with policy-makers by simply voting. He contends that for the past five years, the Conservative government has "deliberately not supported our attempts to try and do something about climate change."

Ultimately, Suzuki said citizens must drive home the importance of sustainability so that every party makes it part of their platform.

"These fundamental issues, they're not political," he said. "They lie at the heart of what we are as a species."