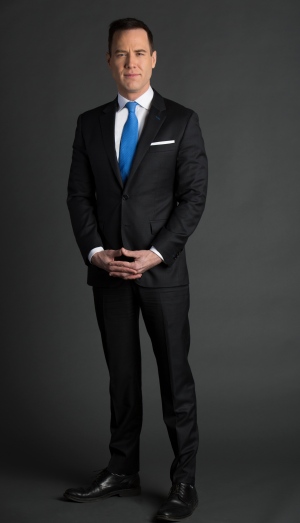 As an anchor at CTV News Channel, Todd Vanderheyden keeps Canadians informed each afternoon and evening with news and information impacting their daily lives, as well as the top stories from across the country and around the world.

Vanderheyden became an anchor at CTV News Channel in January 2012. His move to this national broadcaster came after 12 years at CTV Montreal, where he co-anchored the station’s flagship weekday noon and 6 p.m. newscasts.

His career highlights with CTV News include: covering the September 11, 2001 terrorist attacks on assignment in New York City; covering the election of Pope Francis in March 2013; a month-long assignment covering the 2014 Olympic Winter Games in Sochi, Russia; and covering the inauguration of U.S. President Donald Trump from Washington in January 2017.

Vanderheyden first joined CTV Montreal in January 2000 as a reporter. Beginning in 2003, he delivered the investigative segment ON YOUR SIDE, which he hosted for five years until his promotion to anchor. During his career in Montreal, Vanderheyden won several industry awards for his reporting, including three RTNDA awards and one CAB award.

Off the air, Vanderheyden devotes a great deal of time to various local LGBTQ charities and community events, including Rainbow Railroad, the International Day of Pink, the Out on Bay Street conference, and The 519.

Originally from Montreal, Vanderheyden also lived in Toronto and Ottawa growing up. He holds a bachelor’s degree in Journalism from Carleton University and a graduate degree in Communication Studies from Concordia University.

Vanderheyden is an avid comic book collector, a self-described sci-fi geek, and an Elvis Presley fan. He and his partner currently reside in Toronto.