The seven year switch: Harper misses chance to back up his apology

Seven years ago today, Stephen Harper had his finest moment in aboriginal relations.

The Prime Minister stood in the House of Commons and apologized for the residential school tragedy. He said it was sincere. He said it was profound. He vowed that all of Canada would share the burden of aboriginal reconciliation in the future.

Today, there are legitimate grounds to wonder if it was all just an act.

By what could’ve been a beautiful coincidence, the Prime Minister had an audience with Pope Francis Thursday morning.

The coincidence is that just last week, the reconciliation commission which Harper created, recommended the Pope be asked to apologize this year for the Catholic church’s shameful role in a school system which was fronting a cultural genocide.

Opportunity beckoned. A Pope of the people, clearly possessing the compassion and capacity to deliver a heartfelt apology, probably needed only to be asked. 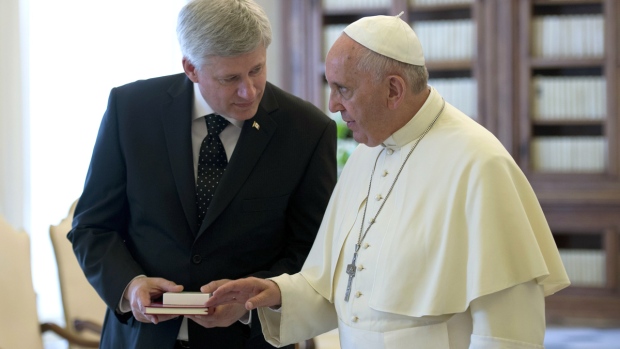 But in what church officials confide was a short and tense meeting, Harper merely referred to a letter from his minister which doesn’t mention the apology and suggested His Holiness come to Canada for our 150th birthday bash two years hence.

Or perhaps he thought it would waste a perfectly good papal visit to focus on such a dark purpose when the government can bask in the reflected glow of Pope Francis photo ops at Conservative-hosted party events.

But still, it was a golden opportunity wasted.

Commission Chair Murray Sinclair, aboriginal leaders and school survivors won’t have the chance to face the Pope and deliver the request in person. Only Stephen Harper had the access, backed by perfect timing, to deliver such an important invitation on behalf of so many First Nations.

There’s no easy way to implement most of the calls for atonement urged by Truth and Reconciliation Commission. Many are costly. Some need provincial co-operation. A few just defy common sense.

But to directly invite a religious leader whose church had a devastating role in a school system where an estimated 6,000 children died to apologize, well, that’s the easiest reconciliation to implement.

If the government can’t bother to merely deliver an ask, it casts doubt about his own commitment to the hard job ahead.