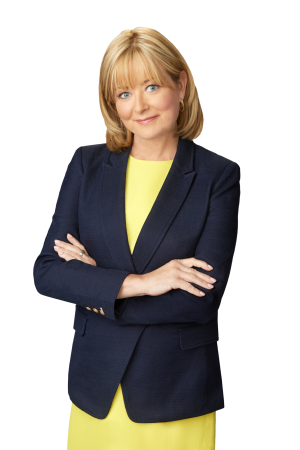 One of Canada’s most respected news personalities, Thomson is currently noon Anchor on CTV News Channel. Prior to that she was Co-Host of CTV’s CANADA AM from 2003 until the program signed off in June 2016. During her tenure with Canada’s most-watched morning show, Thomson interviewed some of the nation’s most treasured musicians, athletes, actors, authors, politicians, and dignitaries, including Prime Minister Justin Trudeau, The Right Honourable Stephen Harper, Hilary Clinton, and Donald Trump. Thomson landed the first Canadian television interview with current Governor General David Johnston and his wife at Rideau Hall. In addition, Thomson has interviewed countless top Hollywood personalities including, Barbara Walters, Jane Fonda, and Bradley Cooper, to name just a few.

Thomson’s illustrious, near 30-year career has taken her around the world, including London, England in the midst of April 2011’s Royal Wedding build-up to film a series for CANADA AM, to Vancouver to co-host CTV’s OLYMPIC MORNING program during Vancouver’s 2010 Winter Olympic Games; across Canada for numerous federal, provincial, and municipal elections; and to Washington, D.C. for the 2009 Presidential Inauguration. In addition, Thomson has contributed stories for CTV’s W5, Canada’s most-watched current affairs and documentary series.

Thomson is the 2006 recipient of the Humanitarian Award from the Gemini Awards, now Canadian Screen Awards. In June 2009, she was also appointed by the Earl of Wessex, Prince Edward, as the National Ambassador for the Duke of Edinburgh Awards.

In 2003, Thomson was named co-host of CANADA AM, marking a return to CTV following six years as the anchor of the evening newscast at Global Toronto. Previously, Thomson spent seven years at CTV Toronto as a general assignment reporter and weekend anchor. Thomson’s career started in radio after graduating from Seneca College’s Radio and Television Broadcasting program in 1987.

Thomson lives in the Toronto area with her two children. In her spare time, she enjoys skiing and playing squash with friends. She speaks English.